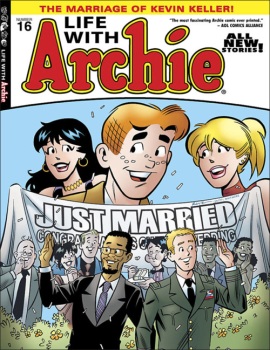 One Million Moms is calling on Toys R Us to pull an Archie comic about same-sex marriage from its shelves.

Remember the One Million Moms? It’s the division of the American Family Association that wanted JC Penney to drop Ellen Degeneres as its spokesperson because she’s openly gay. That demand went nowhere, so now the group is trying its luck with another target: Archie Andrews, specifically issue 16 of Life With Archie, which tells the tale of Kevin Keller, an openly gay soldier who returns from the war to marry his boyfriend.

“Select Toys ‘R’ Us stores are now selling Archie comic books with a same-sex wedding displayed on the front cover. The front cover reads ‘Just Married’ with two men marrying and one is wearing a service uniform,” the Moms say on their website. “These comic books are sold at the front checkout counters so they are highly visible to employees, managers, customers and children. Unfortunately, children are now being exposed to same-sex marriage in a toy store. This is the last place a parent would expect to be confronted with questions from their children on topics that are too complicated for them to understand. Issues of this nature are being introduced too early and too soon, which is becoming extremely common and unnecessary.”

The group says Toys ‘R’ Us should be “more responsible in the products they carry” and want consumers to drive that message home with an email campaign requesting that it remove all “same-sex ‘Just Married'” Archie comics immediately.

It’s probably worth pointing out that in spite of its name, One Million Moms actually has about 1200 followers on Twitter; it also apparently boasts about 44,000 followers on Facebook, although the link to its Facebook group now seems to go nowhere, perhaps a consequence of the growing number of anti-One Million Mom groups popping up all over the place.

Toys ‘R’ Us hasn’t yet commented on the complaint but Archie Comics co-CEO Jon Goldwater has, and in a pretty snappy fashion, too. “We stand by Life with Archie #16. As I’ve said before, Riverdale is a safe, welcoming place that does not judge anyone. It’s an idealized version of America that will hopefully become reality someday,” he said in a statement. “We’re sorry the American Family Association/OneMillionMoms.com feels so negatively about our product, but they have every right to their opinion, just like we have the right to stand by ours. Kevin Keller will forever be a part of Riverdale, and he will live a happy, long life free of prejudice, hate and narrow-minded people.”