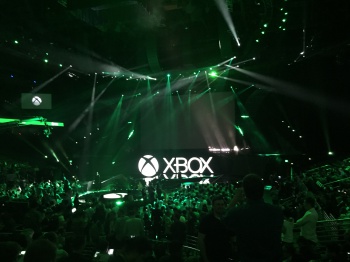 It’s a running joke that E3 must have a “winner,” usually determined by the most exciting pre-show press conference. Sometimes it’s easy to determine who the champion based on audience reaction. Out of the three main console makers, which briefing had the most surprises? The best trailers? The biggest announcements? Did it flow well? Did the publisher have a sense of humor? Were there any awkward moments or total fails (for example, Microsoft’s entire 2013 showing)?

Now that the big three have made their presentations, it’s time to judge: who won? As it turns out, everyone.

I’ve sat through a lot of Microsoft press conferences, some good and some… less good. The Xbox publisher has struggled in recent years, particularly from the backlash leading up to the Xbox One’s 2013 launch. This year, they were clearly trying to make up for that by kicking it off with a surprising announcement: the Xbox One is going backward compatible. The audience reaction was one of pleasant shock–Team Escapist spent the hour leading up to the event speculating about what surprises might be shown, and not one of us guessed that.

Microsoft kept momentum going throughout the entire briefing, hitting beat after beat with very little filler. You want Dark Souls III? You got it. Here’s some Rainbow Six, too. Oh hey, look at these adorably creative indie games! Rare’s making a new IP that has nothing to do with Kinect! And how would you like a bunch of classic Rare titles on a single disc? Done and done–insert your own Battletoads joke here. The mind-blowing Minecraft demo actually gave us a valid reason to want Microsoft’s HoloLens. Let’s not forget about the Xbox-exclusive Rise of the Tomb Raider. And speaking of Lara Croft, let’s take a second to discuss all the playable female characters shown and women onstage-it was a super-positive message to send just as things were getting underway.

The only real lull during Microsoft’s briefing was when Peter Moore came onstage to discuss EA’s paid service. That bit of awkwardness aside, the general vibe when the presentation ended was that this was the best Xbox E3 showing in years, a sentiment I definitely agree with. 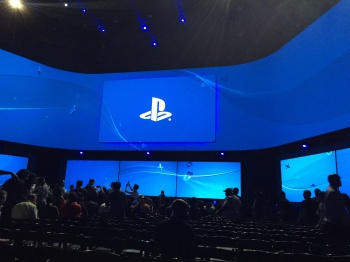 By the time the Sony press conference rolled around at 6pm PT on Monday night, we were nearing the end of a very long day of being shuttled from place to place and filing in and out of auditoriums. That didn’t diminish the mood, though–Sony has had some great showings so far this generation, and expectations were high. How was PlayStation going to top Microsoft’s impressive display? By starting with a game that was announced years ago and never heard from again.

The PlayStation conference was all about wish fulfillment, and after this year, we’re going to need some new E3 rumors to mull about. After the opening bombshell of The Last Guardian, Sony gave us something I’d long given up on: a Final Fantasy VII complete remake. To be sure, it’s very early in development, but as someone who unabashedly adores FFVII, I was ecstatic–and I definitely wasn’t the only one in the audience feeling that way.

But wait! There’s more! Remember Shenmue? Here’s a Kickstarter for Shenmue 3. Now, I absolutely understand why some people are confused or skeptical about a crowd-funding campaign being announced at a massive press conference thrown by one of gaming’s biggest companies. But I also love living in a time where gamers can make what was once impossible an actual reality by speaking with their dollars. Clearly Shenmue fans agree, as the campaign blew through its $2,000,000 goal in under 24 hours.

In between the bombs, Sony had plenty of new titles to show off, like the adorable World of Final Fantasy, the intriguing Firewatch, and Horizon, yet another game with a woman protagonist. My only personal disappointment was the lack of Persona 5, though Atlus made up for that this morning by announcing a 2015 release date. After the show, the chatter was all about the mega-surprises–it almost didn’t seem real. 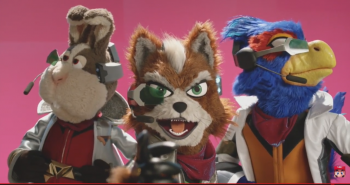 Nintendo obviously marches to its own beat, which has been both good and bad for the house that Mario built. We all know that the Wii U has struggled since launch, but Nintendo picked up a lot of momentum last year with Mario Kart 8, Super Smash Bros., Hyrule Warriors, and its on-point presentation at E3 2014, an online-only affair. So instead of making my way into a crowded auditorium, I wandered over to the media room at the Los Angeles Convention Center to watch the stream.

I wasn’t alone; the media center was filled with other members of the press doing the same thing, which provided a really good gauge for when Nintendo was doing something right. Whenever an announcement excited the crowd, the room filled with cheers; that happened a lot during the hour-long presentation. The segments between games, showing Nintendo execs as puppets, were funny and charming. Reggie Fils-Aime’s awkwardness of yesteryear is… well, still awkward, but in a more endearing sort of way. Super Mario Maker seems to have come a long way since its debut at E3 2014. Amiibos in Skylanders is a huge get for both Activision and Nintendo, and could give families a legitimate reason to get a Wii U over other consoles.

There were plenty of fan-favorite franchises on display, too. Starfox led the way and was followed by a three-player Zelda, Fire Emblem Fates, and Animal Crossing Amiibo Festival, a Mario Party-esque virtual board game. The focus on Amiibo could be a negative or a positive, depending on how much you like chasing down tiny NPC figurines; I’m not a die-hard collector, but I was definitely charmed by the line-up of yarn Yoshis. But perhaps my favorite moment was legendary game designer Shigeru Miyamoto discussing the level design of Super Mario Bros. to show potential Mario Maker players what kind of thought goes into the process. His unraveling of World 1-1 was insightful, and as always, he seemed genuinely happy to be discussing his work. The presentation was full of good vibes and had the media room full of smiles.

So no, there’s no “winner” of E3 this year. Or rather, there are many winners. Microsoft, Sony, and Nintendo made me smile, made me cheer, made me gasp, and made me eager to get my hands on the different experiences each publisher has to offer. Despite the fact that I was working, watching those briefings was a joy. So in that respect, I’m a winner too. We all are.

Disney Infinity 3.0 Hands-On: Use the Force