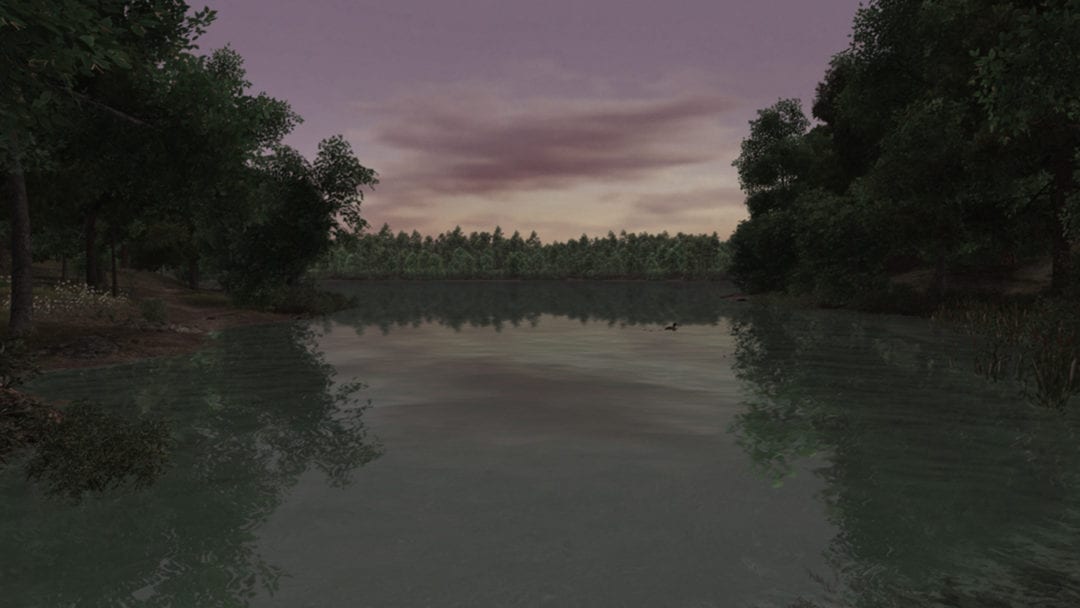 In Dylan Arena’s paper “Video Games as Tillers of Soil,” Arena defines a learning area applicable to video games called “affinity space.” Affinity spaces are usually found outside games. They’re where players come together to figure out how a game works and how to solve a game’s problems. Say you’re going for the speedrunning feat in Shovel Knight. Those massive dragons on the first stage take a time-consuming amount of hits. If you need to watch a video detailing how to skip those dragons, you’ve found an affinity space: YouTube. The dynamic between what you learned in one space and how you’ll apply it in another is what game director Tracy Fullerton wanted to tap into with her adaptation of Henry David Thoreau’s Walden.

Walden, a Game puts the player in Thoreau’s shoes at the shore of Walden Pond to live out Thoreau’s experiment. As Thoreau, you must manage basic survival amenities such as food and shelter along with abstract concepts like time and inspiration. Days don’t end when you’re ready for them to, but as the virtual sunsets. You could spend time earning money to survive winter more easily through upgrading necessities into luxuries, or you could refill resources as-needed and explore the woods to find inspiration.

Inspiration works almost like the rock meter in Guitar Hero. The player gains inspiration by exploring the woods and filling out Thoreau’s journal. The more inspired Thoreau is, the more often you’ll find new inspirational sources, which fill more of the journal. When inspiration is high, the game world is vibrant. But through exertion, especially through labor, the world turns bleak. The game conveys inspiration through contrast — the bleak grayness signals you to change tracks from maintaining Thoreau’s body to feeding Thoreau’s mind.

You don’t have to roleplay as Thoreau, and you’re not told how to, either. You’re given some contextual hints, such as Thoreau’s war protest through tax neglect, and some land to grow beans, but ultimately you decide how accurately you want to play as Thoreau. If you want, you can play the game like other survival games: avoid death, grind away time and energy for maximum profit, and focus on quest objectives. But playing this way means playing in a gray world and ignoring what makes Thoreau Thoreau. The character Thoreau then becomes antagonist to your play.

Walden, a Game neither answers nor supplements Walden the book, but acts instead as a portrait of the raw process. If Walden is, as E.B. White said, “man’s relation to nature and man’s dilemma in society and man’s capacity for elevating his spirit” all beaten together, then Walden, a Game places you at the center of the mixing to balance labor and play. The game is a deliberate exercise in applying video game logic and puzzle solving to Thoreau’s dilemma of being drawn away from his desires by bodily needs. If inspiration is the rock meter, then Thoreau’s journal is your score — your reward for balancing life and living.

There are some hurdles to overcome, as Fullerton has admitted, when it comes to inverting the narrow view of a player’s objective-focused approach back onto their life. In lectures posted on YouTube, Fullerton talks about encouraging this kind of thinking through her game to help players develop a skill applicable outside the game. Even in the safe sandbox of the pond, there is no guarantee that the player will find any radical new perspective. As Stanley Cavell, philosopher and author of the pre-eminent Thoreau deconstruction Senses of Walden, once pointed out, leaving for the pond may be a fruitless endeavor. But it’s precisely this lack of guarantee that binds Thoreau’s Walden to Fullerton’s Walden, a Game.

The play space of a video game is perfect for learning self-reflection. Self-reflection is a difficult objective, and video games operate by hooking their players by their noses with relentless challenges. While both the real and virtual ponds offer no guarantee for personal improvement, the virtual pond is designed to encourage you to improve by providing a place where it’s safe to fail. If the player can take instruction and deduce what nobler pursuits await in the game, then they might find some new focus outside the game. Thoreau wrote that he went to the woods because he wanted to “live deliberately” and Fullerton hopes she can get gamers to “play deliberately.”

The Law Needs a Reboot