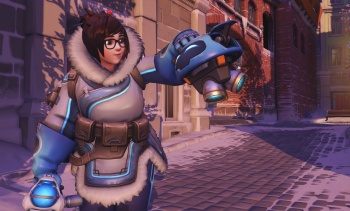 Time to start saving up your in-game credits for another Overwatch in-game event.

A bit of data mining on the latest Overwatch public test realm has revealed some clues that may point to a Christmas-themed in-game event for the shooter, in the vein of its recent Halloween event.

Reddit user Venxa has discovered a slew of audio files suggesting a holiday event. Most obvious of which is a remix of the Overwatch main theme, complete with sleigh bells and xylophones. Both the Summer Games and Halloween events featured similar such remixes.

Other audio files include some pretty humorous interactions between heroes, though they are not necessarily holiday related. Some new voice lines for Athena, the game’s announcer, hints at a new arcade mode, involving an arena, a challenger, and a gladiator.

It’s pretty thin to go on at this point but given the success of the game’s last two in-game events, as well as all of the fantastic possibilities for Christmas-themed skins (Santa Troljborn? Snowman Mei? ELF MERCY??) it seems a no brainier.