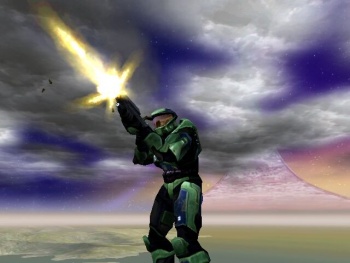 If you’ve been supporting the Halo series since the beginning, you’ll be suitably rewarded in Halo: Reach.

Bungie has a lot of love for its longtime supporters. With possibly the studio’s last Halo game, Halo: Reach, to be released on September 14, a little bonus will be provided for those that own a copy of the original Halo: Combat Evolved for the PC.

Roger “Sawnose” Wolfson clarified on the Bungie forums that owners of a valid CD key for the game will receive a “small visual flair” in Halo: Reach. This will not be a piece of armor or anything from the Armory, so don’t expect anything on the level of Halo 3‘s Recon armor variant.

Wolfson says the flair is “just a little indication that people have been part of a certain Halo community for a while.” Unfortunately, Wolfson admits that Bungie has no way of detecting if players have the arguably more popular original Xbox version of the game, so console owners are out of luck. Owners of Halo 2 for the PC are also excluded because Bungie wasn’t involved with the port.

You’ll be able to get the flair, according to Wolfson, if you’ve ever used your Halo: Combat Evolved CD key “technically, to enter the multiplayer game lobby, since that’s what validates the key” up to the date of May 26th, 2010. The cutoff is to stop players from getting the flair that use a key generator program. Sadly, that means even legitimate purchasers of Halo are disqualified if the CD key was validated after that date.

This is sure to drive the Halo community insane considering the fervor some have for acquiring everything possible in the games. Just be careful with any illicit methods through which you might choose to pilfer this flair; you don’t want to get banned until 9999.