Pale Echoes is an RPG made using RPG Maker VX Ace. Originally released to the public in 2014 as a submission for the 2014 Indie Game Maker Contest, it has now been expanded and spruced up for a commercial release by Degica.

Schorl is the last living human after a mysterious catastrophe she and her companion Spinel refer to simply as “the End.” Spinel is a magical creature known as a Saeri, also the last of her race, and kind of bitter about it. For years, they’ve wandered the ruins of a devastated world filled with hostile beings born of intense emotions at the moment of the End. Against these tortured memories, called Echoes, there is only one effective weapon:- Other memories, of other victims of the End, briefly called back from humanity’s collective memories of its own final moments. Together, they must lay these twisted legacies of the human race to rest. And together, they might discover the truth about the unexplained disaster that killed both of their races- and what use that knowledge might be when everyone else they’ve ever known is already long gone. 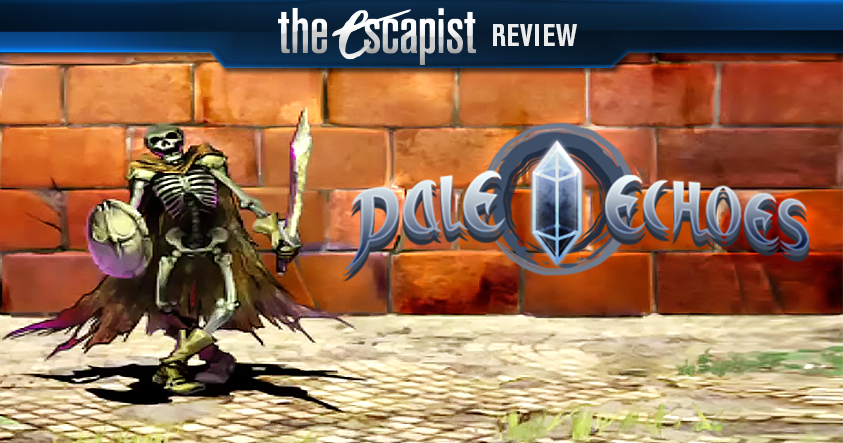 Pale Echoes looks like a standard-issue Japanese-style RPG. This is deceptive. Most of the usual elements of RPGs- character stats, experience points, even party members in the conventional sense- are absent.Pale Echoes makes it work. Battles have more in common with puzzles than conventional RPG combat, requiring you to figure out what you’re facing and plan out how and when to deploy your limited resources to fit the situation.

Getting around between battles is more conventional, though there’s a twist. Each new area is actually two new areas. The End burned an afterimage of the world it destroyed into existence- a parallel world built from humans’ memories of their final hours, accessible through portals connecting it to the real world. There, you can talk to people to learn more about what was going on just before the End, find ways to circumvent obstacles that are impassible in the present, and seek out those rare individuals whose natures are so powerful that their Memory can be used to battle the Echoes.

These Memories, each with ts own set of attacks and support abilities, form the basis of combat. Each turn, you call three into battle. Each takes a single action, as does Schorl, and then they’re gone for the rest of the fight. If you run out of Memories before the battle is won- or Schorl takes enough damage to lose all her Focus you lose. Losing just means having to quit the battle and start over, not death, so you have plenty of room for trial and error.

One neat thing about this system is that standard RPG attrition tactics don’t work. You’re under a tight time limit, and you need to make every Memory count. You steadily gain new Memories, but you also lose them, since every portal between worlds must be permanently “infused” with a Memory to become usable. This prevents your supply of them from getting too comfortably large and forces you to decide which powers you can most afford to lose.

The battles are a clever twist on an old format, and the encounters are both well thought-out and challenging. Some battles took me many tries to win, but I never felt like my defeats were arbitrary or unfair. I always understood why I lost, and immediately wanted to start planning new strategies. There’s tension as the time left to you gets shorter and your range of options narrows, and great satisfaction in finally figuring out how to vanquish a difficult opponent.

I wish there were more of them, though. There’s usually only a few encounters per area, and so the game’s most striking feature doesn’t get as much use as you’d like.

The world is very linear, but each area is interesting to explore. The need to frequently switch back and forth between the vibrantly living world of memory and the bleak wasteland of reality does a lot to establish atmosphere. The game tells you how many Memories and encyclopedia entries are still undiscovered in an area, which I appreciated. However, while getting most of them is straightforward, a few are frustratingly difficult. Even with the New Game+ feature that highlights any you missed in your first playthrough (which is a great idea), I still couldn’t reach one of them.

I liked the story and setting quite a bit. The dialogue is well-written, and the unfolding mystery of the End is intriguing and well-executed. While none of the Memories get a huge amount of development, the little glimpses of each them facing the looming apocalypse are sometimes quite poignant. I even held on to a few weaker Memories it would have been strategically wiser to sacrifice, simply because I liked them and their stories.

The world is surprisingly detailed, revealed in NPC conversations, unlockable entries from the in-game encyclopedia, and descriptive text. The protagonist has no dialogue aside from some lines the player chooses during conversations, but the dialogue options give you some ability to characterize her as you like. Spinel is an interesting companion, and her relationship with Schorl provides another mystery

The graphics and sound are nothing new. Literally – it’s all stock and library stuff, with the sort of sprite-based 16/32-bit era Japanese RPG style that RPGMaker is known for. It looks nice enough if you enjoy that style, as I do, but new and original it isn’t.

It’s a short game. My first playthrough took less than four hours. There’s a New Game+ mode if you want to try different conversation options, see all the dialogue, or find stuff you missed, as well as a “Developer Commentary” option that adds interesting information throughout the game. Still, that only added a few more hours, so if you buy Pale Echoes hoping for a sprawling epic you’re going to be disappointed.

Bottom Line: For the short time it lasts, Pale Echoes has an interesting and creative battle system, a compelling story to tell, and an interesting world to explore.

Recommendation: If you’re an RPG fan looking for something different and don’t mind the length or off-the-shelf graphics, give it a try.