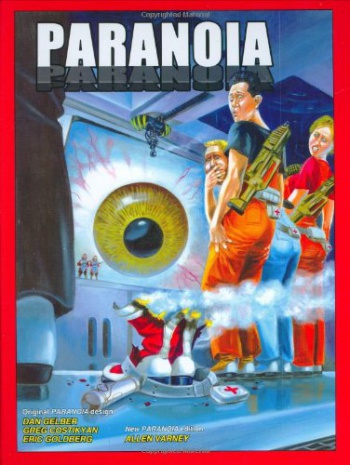 The Paranoia Bundle of Holding introduces you to player characters who may be traitors. Which your character certainly is.

I am feeling very happy. The Computer wants me to tell you that there is a new Bundle of Holding available. It contains the 2004 Mongoose edition of the Paranoia RPG, and it will make you happy too. It may also vaporize you or make you explode. The Computer is you friend.

Paranoia campaigns aren’t exactly the usual “level up and loot stuff” games you’d find in traditional roleplaying books. Players are Troubleshooters, agents of an insane Computer that controls a vast Orwellian society. Trouble is, there’s a lot you don’t know about the game until it’s too late. Mission objectives often directly contradict each other. Players are members of other secret societies with their own hidden goals. And to top it all off, players technically aren’t even allowed to be told the game’s rules. Well, other than “The GM is always right” and “Happiness is mandatory”. The result is a roleplaying game that will spiral out of control very quickly… which of course is the entire point. (I may have said too much.)

Paying $9.95 into the base bundle provides the core Paranoia game, the Criminal Histories expanded character generator, a printable GM screen, and the Mandatory Fun Enforcement Pack mission blender. Paying above the average will get you the Crash Priority and Flashbacks mission books, The Mutant Experience sourcebook, The Traitor’s Manual secret society guide, and an equipment book called Stuff. More books will be released during the bundle’s duration, but I can’t tell you what they are while The Computer is watching. The Computer is such a good friend.

The Paranoia Bundle of Holding runs for the next 11 days. If you haven’t picked it up by that time, I’m going to have to assume you’re in a secret society.