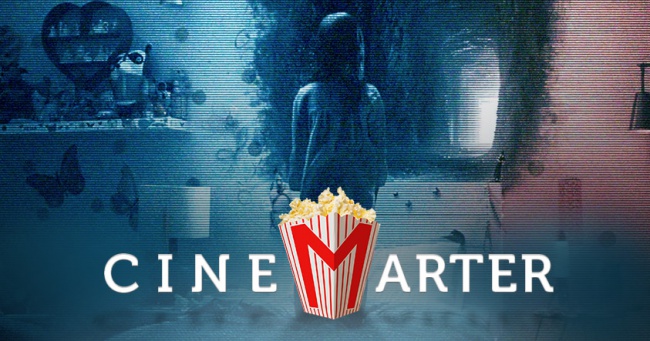 There’s an adage when it comes to horror movies that states that the more you see the monster, the less frightening it becomes. After all, part of the reason that it’s scary in the first place is because of the mystery surrounding it. You don’t know what it can do, you don’t know why it’s acting this way, you don’t know when or where it could pop up, and so on. Like them or not, the Paranormal Activity movies always have, at the very least, tried to keep their ghosts/demons/whatever at least somewhat under wraps, even despite the ever-expanding and ultimately confusing mythology that the series has, for some reason, decided to try to have.

It might come as a surprise, then, that the newest one, subtitled The Ghost Dimension, exists to show us exactly what’s been haunting our various families, tell us precisely why, and remove any and all mystery from the series. The reason, I suppose, is because this is the promised finale to the Paranormal Activity franchise, although that’s a hard claim to believe. My point is this, though: by explaining everything and by showing us our demon early and often, it becomes far less scary. And because this is the sixth movie, we’ve mostly figured it out by now anyway. Franchise fatigue had set in after just a couple of installments; by the sixth entry, what we’re watching feels obligatory. 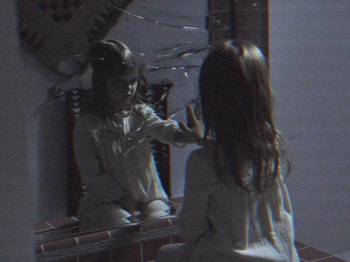 The plot, I’m sure you’ll struggle to believe, involves a family who finds themselves haunted by a demon, so they set up cameras around their house to catch its activities, because demons are such drama queens. The hook is that one of the cameras can see the demon, who looks a lot like Voldemort. Its sinister plan involves using the family’s resident child, Leila (Ivy George), to somehow create a human body for itself. Don’t think too hard about how it all works, as The Ghost Dimension hasn’t, either, even though it has four credited screenwriters. What we get to watch is basically every “child talks to evil entity” movie ever, except that it’s all done in found-footage format with unknown actors, and it tries to tie up the overly convoluted overarching story of the series, which at this point is so terrible that one has to wonder why anyone thought it was necessary.

What results for the audience are a bunch of jump startles with no buildup, tension, or reason to fear, a generic plot that you won’t care about, ridiculously stupid and annoying characters, 3D which means that an already darkly lit film has been made darker, and special effects that would be embarrassing if they were used as a tech demo for a Dreamcast game. The only true positive to be found? There are some laughs, both unintentional and intentional. So, in case you were wondering, the answer to the most important question – “Is it funnier than Paul Blart 2?” – is an emphatic “yes.”

The promised conclusion of the Paranormal Activity franchise is the worst one yet.

Let’s talk about the characters for a second. Horror movies often feature some of humanity’s least intelligent, because that’s convenient – and, at times, a necessity, for the plot. The Ghost Dimension takes that to another level. They’re not only stupid, but they’re annoying, too. Leila’s parents (Chris J. Murray and Brit Shaw) seemingly don’t know how to react properly to anything. The father’s brother (Dan Gill) comes to stay with them for some reason and is even more of an annoyance. For some reason, there’s an “Aunt” (Olivia Taylor Dudley) also hanging around, although she disappears for so much of the second act that I wondered if she was killed off-screen. Sadly not. If you’re wondering why I’m not using the character names, it’s because I can’t remember them, and they’re not so much “characters” as they are placeholders, existing to kill time until the demon comes to eat their faces, or whatever it is demons in human form do.

It comes down to this: is the movie scary? The majority of horror movies live on the pass/fail scale based on this simple question. The answer is this: not even for a moment. I jumped twice in 90 minutes, it’s true, but that’s why they’re jump startles. That’s not the same thing as being truly terrified. The film struggles to build atmosphere, ruins whatever attempts it had with its brand of comedy and by showing us the demon with increasing frequency, and, like most of these films, spends a great deal of its running time staring at absolutely nothing. The build-up is supposed to increase tension, but when all it amounts to are jump startles from an entity about as terrifying as a children’s book villain, it’s about as effective as you reading the word “boo!” that’s been bolded, underlined, and italicized, because someone’s gone overboard on the style tools again.

The promised conclusion of the Paranormal Activity franchise is the worst one yet. It wants to explain the series’ complicated mythos, but not only does it not do that, it also delivers the dullest movie one could probably make given the premise. Stupid and annoying characters, bad 3D that exists just to throw things at the audience like we’re living in the ’90s, special effects that are laughably bad, a recycled plot, and jump scares in place of tension, atmosphere, or any genuine horror. The only entertainment it offers comes from its laughs, both intentional and unintentional – although, for a horror movie, that’s not a positive thing. Please, anyone from Paramount: let this be the end.

Bottom Line: The conclusion to the Paranormal Activity series is awful, and the filmmakers should feel bad that this is how it’s going to end.

Recommendation: This is the last one, so only see it if you’ve already tortured yourself with the other five and just need to see it through to the end.

Chaos Forces in Total War: Warhammer are a Pre-Order Bonus

Bethesda Teams Up With Carlsberg UK For a Fallout Beer