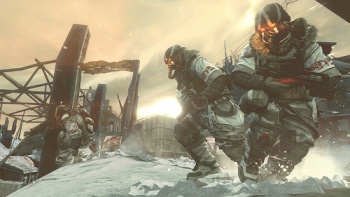 I never really jumped on the Killzone train. I never played the first game, and I played the well-received second game for maybe all of five minutes at a friend’s house. So when I took up the controller here on the PAX ’10 show floor for a round of Killzone 3 multiplayer, I knew I was going into the game in a vacuum – I had absolutely no context for what I was going to play.

Killzone 2 was criticized for having sluggish controls that developer Guerrilla Games claimed were intended to give the game’s combat a feeling of “weight.” Killzone 3, on the other hand, felt like it swerved too far in the other direction – for the first minute of the match, my crosshairs kept flying past my intended target. Or it’s possible that the controller sensitivity was dialed just a hair too high. Either way, it was fairly easy to jump into the iron-sight-based multiplayer after looks at both Brink and Crysis.

Most (if not all) of the Killzone 3 promotional material thus far has featured combat taking place in the frigid arctic regions of the planet Helghan, and this map – a snow-bound military installation – was no different. It’s a testament to the graphics team at Guerrilla that they can make a multiplayer map feel so wholly bleak without the aid of any sound (or rather, without the aid of any sound audible over the dull roar of the PAX show floor). There’s a very nice contrast between the cold white snow whipping across your helmet and the harsh fire of your machinegun fire.

There wasn’t enough time to really get a feel for how the different classes played, and it’s hard to judge how the game is different from Killzone 2 without having played the game in question, but on its own merits I rather enjoyed my brief time with the game. A particularly neat touch is that the game will switch gameplay modes without having to load entirely new maps – you can be playing capture the flag, one team wins, and it immediately goes into territory control without having to go back to a loading screen. It’s very seamless and varied: If you don’t like this one type of game, just tough it out and it’ll switch to a new one soon enough.

Now only if they were showing off those jetpacks …

[Update] Your Pokemon Black & White Starters Could Evolve Like This