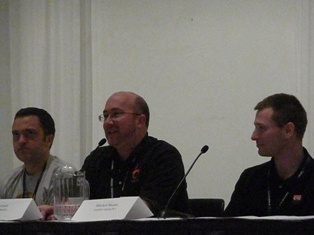 Proponents of PC gaming discussed the challenges of developing on the platform and offered a bleak outlook on its future.

From the outset of the panel at PAX East called “The Future of PC Gaming (Yes, there is one)” it was clear that PC gaming faces significant challenges as compared to its console brethren. Moderated by Jeff Kalles, Senior Sales and Marketing Manager at Penny Arcade, each member of the panel admitted to loving PC gaming but said that it’s a small market compared to its heyday. John Abercrombie, lead programmer of Irrational Games (Bioshock), repeated a few times that developing console games is where the money is. Joe Kreiner of Terminal Reality said that his audience is small because of MMOGs. Mitchell Shuster, maker of LAN friendly PC machines at LanSlide, was the sole panelist who seemed to be somewhat positive and cited the strengths of being able to upgrade your PC rig piecemeal and the open source movement.

Standardization was brought up early, with many gamers asking why no one had developed a system that has stuck. “I think there’s just too many options out there, honestly,” Abercrombie said, referring to the myriad of hardware and peripherals that PC gamers need to have a decent rig. “There’s too many things for people to buy, whereas with the console there’s just one console. You can just go to the store, and buy the one thing that will work.”

Jeff Kalles’ response was, “The panel is a lie.”

The explosion of MMOGs on the PC platform was brought up as a possible danger to more single-player experiences. One gamer said that he has no interest in MMOGs but he was concerned that was where he currently saw all of the innovation and energy on the PC, his platform of choice.

“The state of PC gaming industry right now is directly in response to World of Warcraft,” said Kreiner. “You guys are all playing World of Warcraft, except for you, sir, you are the only one.” He continued pointing at the gamer who brought it up, “As a game developer, my total available market is you.”

It wasn’t all doom and gloom. Open source software is a boon to many smaller independent designers, and that is only possible on the PC. “It’s actually one of the strengths of the PC,” Shuster said. “It’s got that open source aspect that allows people to do the mods and make the new games baased on the old games. To do a palette swap and create Counter Strike, that wouldn’t have existed otherwise.” The amount of things that you can do will “entice people to use the PC more than the consoles.”

The cost of developing games on the PC is generally less than for consoles because the developers don’t have to license from one manufacturer like Sony or Microsoft. Abercrombie estimated that almost 10% of the retail price of a console game goes towards fees associated with consoles and that’s part of why PC games are less expensive. Kreiner also mentioned that niche products like Civilization will still sell very well on the PC and developers would be more served creating games like that.

As the console generation gets older, we also might see a resurgence of the PC market as its hardware is now capable of more graphics and processing power than the consoles, especially with nVidia announcing its latest cards at PAX East yesterday.

“If the console cycle goes too long, you can really see a resurgence of PC as developers want to target the visual high-end,” said Kriener. “It really depends on how long [the console generation] goes.”