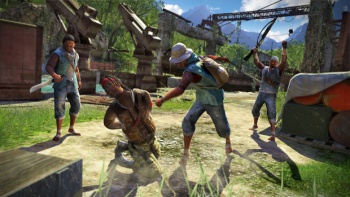 Much has happened to the world of first person shooters since Crytek’s Far Cry first taxed our wimpy graphics cards back in 2004, and while the shooter did feature its own brand of online gunplay, the mode, like others of the era, was the product of a time before games like Call of Duty and Battlefield took center spotlight. Love or hate the series that now dominate the genre, these behemoths of the internet’s bullet bandwidth have changed the way shooters are perceived, and even games such as the upcoming Far Cry 3, which boasts a solid foundation of ancestral successes, have been forced to take notice. That isn’t to say Far Cry 3 directly clones its contemporaries–far from it–but the general control-scheme and motion will be immediately familiar to anyone who’s even lightly dabbled in nearly any FPS made in the past five years.

While this year’s PAX East didn’t give us the opportunity to check out any of the single player campaign, we did have the chance to go hands on through a full round of the game’s online Domination mode, a “capture area, defend area” team exercise that’s positioned to be central to the game’s online experience.

As the match began, the first thing I noticed were the distinctly Far Cry lush jungle visuals. The map was filled with vibrant green, a, ahem, far cry from the usual dusty brown and grey landscapes of its contemporary competition. I had only a few moments to look around and reminisce about how much the world carried the great aesthetic of the original before the dude standing next to me at a nearby station blew my head off with his sniper rifle, and playfully punched me in the arm. Okay … game on, dude standing next to me.

On a mission of sweet revenge, I respawned with a submachine gun character (one of the many class/equipment set options available with which to play), and with no tutorial for controls, easily slipped into moving my mercenary around the map. The default button-mapping is likely exactly where you’d expected it which, while not particularly exciting or surprising, works in the game’s favor. Ubisoft Massive, the company that spent two years independently developing the mode, seems to know that its audience has played an FPS or two in their day, and didn’t try to add unnecessary additions to the standard mechanic. The game plays like you think it does: “There’s a guy over there, his name is in red, I’m going to shoot him.” It’s a classic experience, and Massive has accomplished it smoothly.

After the match, I got a chance to share a few words with one of Massive’s game developers, Daniel Berlin. I told him that I had enjoyed my time with it, but wondered what the design team had tried to focus on. You know, what’s going to make someone run out to buy Far Cry 3 instead of one of its many competitors for all of their shoot, scoot, shoot, and shout needs. Berlin answered that the game’s setting and theme is what helps define it as a multiplayer shooter. Most other popular games on the market, he said, have a heavy focus on the military; war, Special Forces, and police shooters have saturated the already crowded genre. The factions of Far Cry 3, on the other hand, are designed to be as colorful as its jungle aesthetic, a cast of pirates and criminals scrambling around a pacific island to shoot one another without the confines of a government organization’s tactics or weaponry.

Some of this personality can be seen thorough small touches, such as the cutscenes that follow match endings. After our team reigned victorious (and I offered a smug smirk at the dude standing next to me) we were shown a small scene that featured the top three players of my team standing menacingly around the top player of the defeated team. Our highest scoring player was then offered a choice: let the guy be tied up in peace, or order the rest of us to beat the ever-living crap out of him. Our guy choose the latter and, in what wasn’t a shining beacon of the honor in gentlemanly combat, we watched as our characters took turns punching, kicking, and head butting the poor sucker at our ring’s center. Berlin also explained that the “brutality” option is customizable, so if you want to be a jerk, you can be a jerk in your own special way. Teabaggers everywhere, rejoice!

Aside from the fun, if not standard-feeling core gameplay, there will be a few other things to look forward to as well. Berlin mentioned an “Inferno Mode” in which the island lights on fire, consuming nearly all of it by match end. He also told me to expect a fully-developed level designer that will be included with the PC version of the game as well as the Xbox 360 and PS3.

While I didn’t have a chance to see any of the game’s single-player, I did ask Berlin about his company’s priorities. Many people love Far Cry for the solo campaign and, of course, it’s common for players to voice concerns that a focus on multiplayer can somehow detract from the developer’s attention from the singleplayer. Berlin assured me that exactly the opposite was true in the case of Far Cry 3, as his team has been at it for nearly two years, working independently of the team crafting the single-player experience. If all goes according to plan, Berlin believes that players will experience the same robust story mode they want, with the added bonus of a smoothly crafted multiplayer experience worthy of facing the multiplayer-centric giants to which it will certainly be compared at release in September.