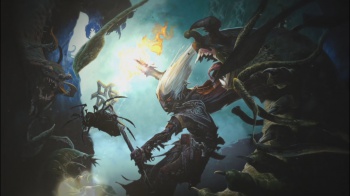 D&D‘s main storyline for the rest of 2012 summons players to delve into the Underdark, do battle with the drow, and save the Forgotten Realms from the Spider Queen’s machinations.

If you’re a fan of classic Dungeons & Dragons games, you probably have some fond memories of the Underdark. Whether it was disguising yourself to blend into Viconia de Vir’s homeland in Baldur’s Gate II, confronting the Valsharess to finish Act II of Neverwinter Nights: Hordes of the Underdark, or making an impossible roll in your own tabletop group, chances are you’ve had some memorable experiences in the land of the dark elves. Fans of the D&D pencil-and-paper game will soon have some even more epic stories to share from the dark regions below. Rise of the Underdark, the latest D&D campaign, gives Dungeon Masters and players the tools and setting necessary to journey into the bowels of Faerûn in the hopes of thwarting the Spider Queen Lolth and her drow minions – or rolling a drow character and playing D&D in a whole new way.

Rise of the Underdark is the latest entry in the history of the Forgotten Realms. When the 4th Edition of Dungeons & Dragons came out in 2008, the Forgotten Realms Campaign Guide was not far behind, and the story has advanced since then in a plethora of sourcebooks, adventure modules, novels, board games, and more. At the outset of Rise of the Underdark, the goddess Mystra, the Queen of Magic, has been missing for a long time. Apart from a brief resurrection in a mortal body, no one has known Mystra’s whereabouts ever since her apparent death during the Time of Troubles (Baldur’s Gate fans will remember that Bhaal, the Lord of Murder, also perished during this era, kicking off BioWare’s memorable series). Never one to pass up an opportunity, Lolth the Spider Queen, patron goddess of the drow, believes the time is ripe to seize Mystra’s throne and overrun Faerûn.

There are two primary ways to experience this adventure: D&D Encounters or through the regular sourcebooks. Encounters is a program that runs through local game stores and brings both new and veteran players together for the official Rise of the Underdark storyline penned by Wizards of the Coast. For players and DMs who already have established tabletop groups, they will probably want to invest in the new sourcebooks, map tiles, and Fortune Cards to craft their own adventures. While there will be no way for private groups to follow the official Wizards storyline (at least until after its completion), the new sourcebooks should provide all requisite information for groups who wish to face Lolth and the Underdark’s other challenges on their own.

If there’s a gaming store that runs D&D Encounters near you (you can check here), your adventure will begin on a Wednesday night between May 16 and August 15, 2012 with the “Web of the Spider Queen” adventure. Shelly Mazzanoble, an associate brand marketing manager for Wizards, describes the basic setup: Lolth, eager to become the next Queen of Magic, rallies her drow and sends them to the surface in search of ancient artifacts. The player party follows the drow trail back into the Underdark searching for answers, “and boy, will [the party] ever find them,” Mazzanoble promises. While Wizards remains tight-lipped about further story details, the full campaign will run until December 19, 2012, taking the players on an epic quest for the better part of a year.

If you’re already part of a regular group, however, there’s no need to rush out and join Encounters thanks to two upcoming sourcebooks: Into the Unknown: The Dungeon Survival Handbook and Menzoberranzan: City of Intrigue. The first book focuses on the mechanics of creating and surviving dungeons, particularly those in the Underdark, while the second deals with the layout, architecture, politics, and adventures waiting in “the most infamous dark elf city.” Neither one of these books will follow the Lolth story per se, but should give eager DMs and players all the tools they need to descend into the Underdark for adventures of their own. Fewer details have emerged about a new deck of player-oriented Fortune Cards entitled Drow Treachery, but Chris Lindsay, an assistant brand manager, assures players that the title should tell them all they need to know.

In fact, Lindsay suggests that players who would rather join the drow than stand against them will be well served by Rise of the Underdark. D&D is traditionally a cooperative, group-based experience, says Lindsay, and even when players roll disagreeable or evil characters, there’s still a general sense of working to achieve the same goals. City of Intrigue and Drow Treachery will provide the tools to help shake things up, encouraging players to “act in a way that is not cohesive to the group.” Lindsay explains that “It’s fun for the DMs, and players will love it.” Intra-party competition is usually a recipe for disaster in D&D, but Rise of the Underdark will aim to pull it off in a way that engages players instead of encouraging them to pull their hair out.

If the storyline sounds intriguing but you’re not ready to jump into a pencil-and-paper RPG just yet (it’s really not that scary; all you need is a good imagination and some dice), Rise of the Underdark will be a fairly comprehensive transmedia tale. In addition to a slew of novels (including one by fan favorite author R.A. Salvatore), eBooks, and comics, content will seep over into the Heroes of Neverwinter Facebook game and Dungeons & Dragons Online.

The Underdark can be a fairly grim setting, and won’t be to everyone’s taste. Rise of the Underdark looks to have an ambitious story and a few fun new ways to play, though, so if you have a few free hours each week, it couldn’t hurt to try out D&D Encounters at a nearby store. Besides, if you had fun in the Underdark during previous adventures, this upcoming campaign will be like visiting old friends: old friends who really, really want to kill you.