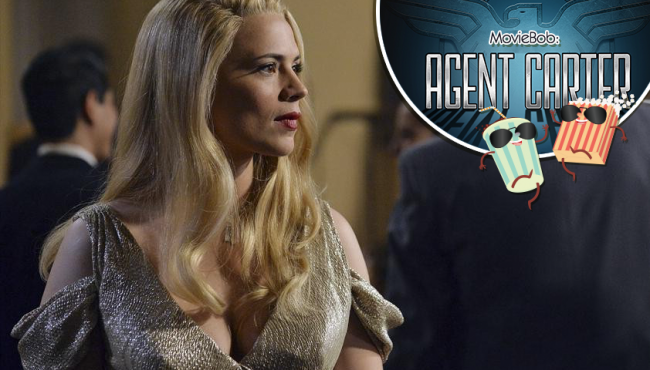 After stealing the show in Captain America: The First Avenger, Peggy Carter is back.

Probably the most surprising thing about Agent Carter is how insistently – almost defiantly it plants its feet and announces its intentions to be About Something right off the bat. While some other superhero/comic-book franchises are eager to be seen as costumed treatises on class warfare or geopolitics, the Marvel Cinematic Universe prefers to keep its heroes loosely but firmly on the side of comic-book escapism. Sure, Captain America may have spent his second movie bracing against government overreach and bringing down the surveillance state, but it wasn’t as though “the problem” turned out to be some politically-specific rot in the machinery of Western capitalist-democracy. Instead, it was an Evil Computer powered by the immortal brain of a Nazi mad-scientist.

That Carter’s “something” turns out to be throwing cold water into the myth of the U.S. as a bastion of joy and optimism in the immediate aftermath of World War II, specifically as it pertains to sexism and the overall experience of American women of the era? That would be unusual for any TV series, superhero-adjacent or otherwise. Period adventure yarns grounded in postwar “pulp” action-kitsch tend to be more interested in polishing the era’s glossy self-image, not tearing it down.

For reference: During the war, with so much of the male population called away to fight, American women were granted previously unheard of mobility and prominence particularly in the workforce – a prominence they quickly saw yanked away from them as The Men returned from fighting and sought to reclaim not only their careers but the prewar status-quo of subservient, housebound female counterparts largely comfortable with de facto second-class citizenship. The resistance to this backwards momentum, both passive and more strident, by many women is widely recognized as the first spark of what would become the Women’s Liberation and modern Feminist movements roughly a decade later.

Miss last night’s two-hour premiere? It’s definitely worth watching. You can catch it online on Hulu or buy it digitally on Amazon. Now, on with the review – spoilers below!

The series places Peggy Carter (Hayley Atwell) squarely in the midst of this milieu: A decorated soldier and respected agent fighting alongside Captain America and the Howling Commandos during WWII, she finds herself marginalized by her male colleagues at the new stateside incarnation of the Strategic Scientific Reserve, now a sort of “S.H.I.E.L.D.-beta” whose staff is mainly comprised of smug, reflexively-sexist brutes who’re all too happy to treat Carter as a glorified secretary – or worse – as only even having her job because she was the (presumed dead) Captain America’s “girlfriend.”

I was actually taken aback, at first, at just how heavy the series lays on the casual indignities inflicted on not only Peggy, but every other woman who crosses the frame in the first two episodes (aired back to back as a double-length premiere event). Sure, it’s a welcome sight to see a period drama enthusiastically own up to the U.S. still being far from perfect in the wake of The Big One, but for a moment there it feels like we’re building to a reveal of Carter as another Inhuman – this one with the special power to attract misogynists like a magnet. It’s especially noticeable when occurring in-tandem with the specter of our heroine’s frequent-flashbacks to her chaste (?) romance with Captain America “haunting” the proceedings, as though the only decent male to ever walk the Earth gave his life fighting The Red Skull.

That’s not to say there’s not something subversively thrilling about seeing a network action series make the day-to-day difficulties of a woman in navigating patriarchy its central theme, but it could’ve gotten repetitive and depressing early on if the series didn’t have any other tricks up its sleeve. Fortunately, once the main plot kicks in (Howard Stark, framed for the sale of dangerous weapons to enemy forces, wants Peggy’s help in covertly clearing his name and securing said stolen weapons) it becomes clear that this is a series more interested in plotting than preaching.

Specifically, the focus on the gender imbalance of Carter’s daily grind serves as both complication and cover for her attempts to aid Stark (she’s conducting her shadow-investigation right under her Stark-hating superiors’ noses) but also as a way of making the Marvel/Avengers-adjacent characters stand out as subtly superior to their contemporaries. Stark (Dominic Cooper) notably refers to Peggy using mainly gender-neutral terms of affection (“pal,” “buddy,” etc), while his loaned-out British butler Edwin Jarvis (James D’Arcy) is a happily-domesticated house-husband off the clock.

This being a Marvel project, it shouldn’t come as much surprise that the character interplay and world-building (the series is a prequel to Agents of S.H.I.E.L.D., positing Carter as the Agency’s “Founding Mother”) thus far seem secondary to the plot, which – also in quintessential Marvel fashion – thus far mainly involves good guys and bad guys jockeying over a glowing MacGuffin with vaguely-defined destructive capabilities. There are hints at a bigger story to come, what with mysterious assassins with unexplained missing vocal cords and talk of “The Leviathan,” but for now it looks like Peggy’s hands will mostly be full chasing down rogue Stark inventions.

At this point it’s too early to gauge anything other than the fact that Atwell hasn’t lost a step since she stole the show back in Captain America: The First Avenger and that it’s an overall strong debut. The series has a lively energy (though the soundtrack leans a little heavy on the big band music for establishing the period) and doesn’t thus far lean overly-heavy on the Marvel Universe connectivity like Agents of S.H.I.E.L.D. did early on – though that doesn’t mean they’re there, though: that scientist named Vanko is almost certainly Whiplash’s dad.

Bottom Line: A fun debut. Here’s hoping it keeps up this energy.

8 Nicolas Cage Movies You Can Watch on Netflix