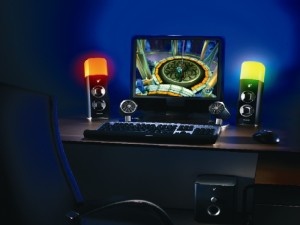 Philips has entered into an agreement with id Software to produce a mod enabling amBX support in id’s popular FPS Quake 4.

amBX, a shortening of “ambient experiences,” gives gamers a “sensory surround experience” by using colored lights, sound and even air through a series of peripherals including LED lights, rumble devices and variable speed fans. The Quake 4 mod, when used with the amBX hardware, will provide 360 degree environmental lighting, moving air and physical impacts as players run and jump, custom weapon effects, bullet impact vibration and more. The mod was first demonstrated on a multiplayer version of the game at QuakeCon in August, where it was very well received.

“The response to the QuakeCon multiplayer demonstration was overwhelmingly positive and we’re delighted to offer all those fans an amBX mod for Quake 4,” said Philips amBX Chief Marketing Officer Jo Cooke. “The range of effects amBX brings to Quake 4 is so diverse, it really offers an all-new first person shooting experience.”

id Software CEO Todd Hollenshead added, “It’s exciting to see Philips’ innovative amBX technology enhancing the already intense experience in Quake 4. amBX was a definite hit at the last QuakeCon and we look forward to even more gamers checking out the visceral amBX experience at QuakeCon 2008.”

Prior to the deal with id, Philips had already licensed the technology to gaming companies including Codemasters, THQ, Gearbox, Invictus Games, Kuju and several others. Recent high profile game releases supporting the amBX technology include Broken Sword: The Angel of Death, Clive Barker’s Jericho, Defcon, Supreme Commander and Toca Race Driver 3, and the company is currently wrapping up deals with a number of other companies to enable support for the technology in future releases.

More information, including a video of the Quake 4 demonstration at QuakeCon and a list of amBX-compatible titles, is available at www.ambx.com.