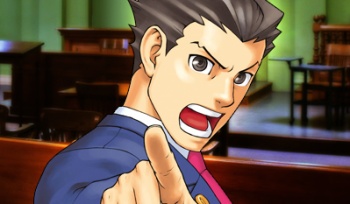 As bizarre as the courtroom antics are in Phoenix Wright: Ace Attorney, could there be an undercurrent of truth to them regarding the Japanese legal system?

If you’ve ever played the (excellent) Phoenix Wright: Ace Attorney games for the DS, you’re probably well aware that the court system in that game is slightly odd – and that isn’t even counting the moments where you cross-examine parrots, either! “Demon Prosecutors” that go decades without a loss? Your client being presumed guilty before anything has started? What a topsy-turvy legal system! And yet, as Fintan Monaghan argues in Issue 253 of The Escapist, it may be strangely familiar to Japanese attorneys:

If you are charged with a crime in Japan and brought to trial, statistics show that there is a 99 percent chance that you will be convicted. This alarming statistic reveals the highly dysfunctional legal system from which the Ace Attorney series clearly takes its inspiration; a system where even a victim of false allegations finds it impossible to escape conviction. Phoenix Wright, the eponymous lawyer of the popular Capcom games, constantly battles seemingly impossible odds as he fights to defend his falsely accused clients. While the fantastical anime nature of the games gives rise to outlandish courtroom antics and bizarre scenarios, the core concept of a lopsided legal system weighted against the accused is an exaggerated parody of Japanese society and their courts.

The influence of Japanese culture on the Ace Attorney world is indisputable. Localization has inserted American pop culture references, and characters often vaguely assert that events happen “here in this country,” yet, in reality, the world of Phoenix Wright is distinctly Japanese. Assisted on his adventures by two Hakama-clad spirit mediums, Phoenix (“Nick” to his friends) draws special powers from his “magatama,” a traditional Japanese symbol. Japanese flavor pervades the whole environment. The top TV shows are the Steel Samurai and the Jammin’ Ninja; our heroes seem to be constantly snooping around Shinto/Buddhist temples; and a deranged Japanese nationalist is encountered throwing seeds at birds in the local park. It is only natural that the courts also mirror their Japanese counterparts. Juries are virtually unknown and major criminal cases are decided by professional judges based on evidence presented by defense attorneys and state prosecutors.

Of course, it’s highly doubtful that most Japanese attorneys will ever have to deal with prosecutors who wield whips from the bench, or encounter cases involving a potential murder-slash-spiritual-possession. But what’s at the core is a different story altogether. To read more, check out “Phoenix Wright’s Objection!” in Issue 253 of The Escapist.

CliffyB: Gears 2 Played With Itself Too Much