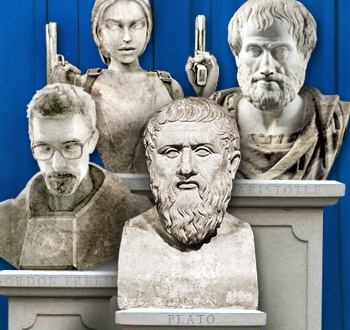 There’s plenty that Aristotle and other Greek philosophers can teach us about videogame design, even if none of them ever played one.

There are all kinds of ways to categorize games. You can separate them by genre or system, or into games you like and that one on Facebook about a farm. You might not have considered organizing them by which Ancient Greek philosopher their design most espouses, but in Issue 273 of The Escapist, Robert Yang does exactly that in an effort to get to the bottom of what makes a game “good.”

So, what makes a “good” game? Well, it all depends on whether you believe in absolute truth … For purposes of simplification, I will ignore all traditions of ancient philosophy that took place outside of Greece. Instead, we’ll just look at the two figures largely recognized as the roots of Western philosophy today – Aristotle and Plato.

Aristotle argued for a type of pluralism, where the purpose of a society was to ensure its individual citizens flourished … and such a person flourishes when he has reached a state of personal excellence or “eudaimonia” … So, an Aristotelian philosophy of game design would presume the existence of a “citizen” – the hardcore gamer. Under this account, the game should chiefly cater to this “best of the best,” allowing these players to excel, perhaps at the price of accessibility for every other type of player.

But there are several philosophical problems with this type of design … Specifically, Plato would’ve called bullshit on it … Plato argued for an account of absolute truth … Ted might be awful at Mega Man, but you happen to be terrible at first person shooters and can’t “get into” them despite Ted’s constant prodding. Your inability to play Halo without foolishly running into walls and spinning around in circles does not diminish its innovation and impact on the entire game industry … And so, the “goodness” of a game must exist outside of the player.

Yang goes on to say that most developers straddle the line between the two philosophies, and the definition of what makes a “good” game is subtly changing on an almost daily basis. You can read more about it in part one of Yang’s four-part series, “The Philosophy of Game Design.”