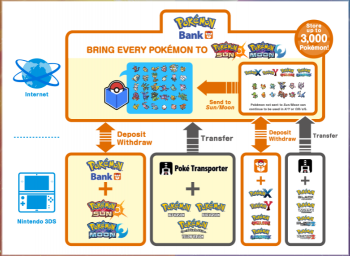 You can now use Pokemon Bank with Pokemon Sun and Moon, as well as the 3DS virtual console’s Red, Blue and Yellow remakes.

Bank when Pokemon Sun and Moon launched it was missing one key piece of functionality: compatibility with Pokemon Bank – the tool that allows players to transfer Pokemon from old Pokemon titles. Today, an update for Pokemon Bank has gone live, enabling functionality with both Sun and Moon and the 3DS virtual console remakes of Red, Blue and Yellow.

Finally, as an added bonus, from January 25 to October 2, 2017, anyone who uses Pokemon Bank to transfer a Pokemon to Sun and Moon will receive an exclusive Mewnium Z Z-Crystal, that cannot be obtained in the normal game. Give the Mewnium Z to a Mew which has learned the move Psychic, and you’ll unlock the powerful Z-Move Genesis Supernova.

If you weren’t already aware, Pokemon Bank requires an annual fee of $4.99 to use.

Windows 10 “Game Mode” Will Boost Your FPS A Few Percent