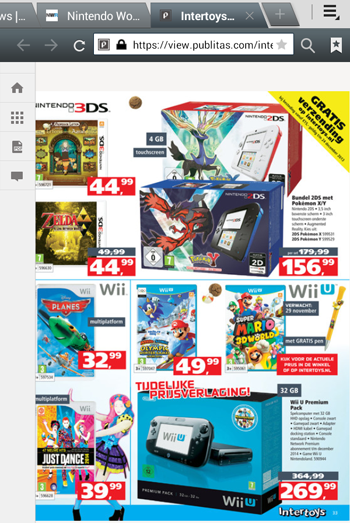 Listings from Dutch retailers Toys XL and Intertoys revealed Pokemon X and Y 2DS bundles, which had previously been revealed as exclusives in South Korea. The limited edition 2DS systems are white and red for the Pokemon X bundle and black and blue for Pokemon Y.

Daan Koopman, known as NintenDaan on Twitter, uncovered the exclusive for Europe. “Looked in the Intertoys folder and it looks like that indeed the Pokemon X/Y 2DS Bundle is there,” he tweeted, including an advertisement from Intertoys. He later added, “Getting reports that the 2DS bundle is available at another retailer called Toys XL. Website does have nicer pics!”

Nintendo has not said anything about the European bundle, so a release date is still unknown. The Pokemon X and Y 2DS bundles will be available in South Korea on Dec. 7 for 180,000 won (about $170). According to Koopman, both Intertoys and Toys XL price the bundles at €157.

Other territories saw the release of limited edition 3DS systems bundled with Pokemon X and Y.