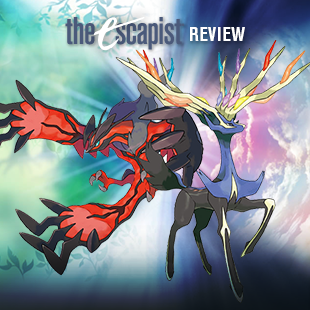 To say that Pokémon is a global phenomenon might be underselling it a bit, but for me it all goes back to a little corner of hallway outside the school cafeteria. When Red and Blue first came out my friends and I would quickly eat our lunch in order to have time for battling and trading before classes started again. Playing may or may not have also been snuck into the occasional math class as well. Game Freak managed to strike proverbial gold by not only making an interesting RPG with loads of detailed mechanics, but the designers coupled that with the need to addictively collect monsters and interact with other players. It ballooned into a more lasting investment with the game than what a more insular title might have offered, and it’s part of the reason that Pokémon is still going strong today. For all the bells and whistles that have been added over the years though, at its core Pokémon X and Y is still the same game you loved years ago.

One area that this continues to ring true is the story; stop me if this sounds familiar. A local Pokémon professor equips you and some rival children with a Pokedex, your choice of a starter Pokémon (of grass, fire or water type) and sends you out on an adventure to catalog all the various Pokémon in the region, and along the way you will battle the themed gym leaders for their badges and some nefarious team of Pokémon trainers. It’s pretty much the same story that’s been retold in every core Pokémon game, but it’s not like you’re playing the game for the story much in the first place. The greater repeating narrative just serves as a reason for your character to interact with similar story elements, while it’s the smaller details that are different.

For Pokémon X and Y, your rivals are actually friendlier this time around (looking at you Gary – even if I might have killed your Raticate you’re still a jerk), you get a second set of starter Pokémon (picking from the original Charmander, Squirtle and Bulbasaur) and you’ll be contending with the evil Team Flare this time around. While there are still references to greater events that would be interesting to explore in the universe, like great battles between nations involving Pokémon, it is understandable why Game Freak would be hesitant to break the simple mold – it’s still a game that has a target audience of children. One thing that will make long standing fans crack a smile is all the little references and in-jokes to past iterations, or when it makes meta commentary on some of the changes. It’s not much, but it’s nice to see some attention being given to older fans as well.

And if you’ve played a Pokemon game before, you’ll find the gameplay is much the same as it’s always been. You travel around the region fighting trainers and wild Pokémon, capturing them and training your selected team. Pokémon will level up, getting better stats, gain new abilities and sometimes evolve into more powerful versions as you battle with them. One of the game’s strengths has always been how scalable this simple gameplay can be. You can put hundreds of hours into crafting and training your team or pick the game up for just a few minutes at the bus stop. The turn based gameplay also makes it a perfect companion for an on-the-go handheld device. Hardcore fans can obsess over crafting the perfect team to min/max how abilities are stronger or weaker based on the type of Pokémon they are hitting, like electric attacks dealing more damage to flying types, or suss out how the new fairy type will change up their previously perfected line-ups. At the same time though, it’s accessible and easy enough for less dedicated fans to enjoy.

There’s actually been an effort throughout the experience that makes the game easier. You get access to certain helpful items sooner, NPCs in addition to Pokémon Centers are scattered about to heal your team in the field, status effects only matter in battle and the areas are paced out to be a little less grueling, nothing like the first time you hit Mt. Moon. Some of you might balk at these changes making the game more casual, but these were never really the aspects of the game that were really providing the depth, it’s the Pokémon stats and mechanics themselves. There’s also been improvements that everyone can appreciate, for instance, it feels like there are a much wider variety of Pokémon to capture when you’re first starting out. 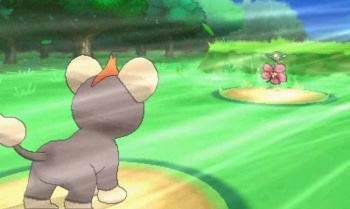 The game will occasionally and rather annoyingly block your path with various NPCs giving some contrived reason for why you can’t get past, or you know just a giant sleeping Snorlax blocking the route, but one of Pokémon X and Y‘s best features is still the ability to wander and explore its world. There’s tons of people to talk to, objects to interact with and branching paths to travel down, even when the game is ultimately funneling you in a single direction. It also does an excellent job of rewarding you for backtracking and meticulously hunting down every corner – there’s a little bit of joy to be had in realizing that you missed a side corridor in a cave and trekking back to find a new item, and it always feels like there’s something to see and do besides just fight random battles.

From breeding and berry farming to training and pampering your Pokémon, there’s a bevy of activities to distract you from the normal grind. There’s even a bunch of shops and options for customizing your character and a surprisingly in-depth video editor. Not all of these activities feel terribly necessary, or that well integrated, and some seem more like gimmicks tacked on to use some feature of the 3DS more, but on the whole it’s better to have too much than too little.

For returning fans who may have skipped the last few generations, the online features give you access to other players at the press of a button. Being able to trade not only with your friends but the entire fan base makes tracking down specific Pokémon a lot easier. Game Freak has cleverly tweaked numbers and features to encourage you to interact with other players, like foreign Pokémon receiving more experience, certain coloration of Pokémon only being available in some regions, or certain special powers that can heal or buff your Pokémon being cheaper to use on others than yourself. It’s a fair bit different from the days of huddling around a link cable, but the game has adapted well to the changes in technology.

The biggest problem with all of these options is how much it stresses the menus; nearly every action, even simple ones, requires navigating a tedious extra menu option. There certainly could have been some better consideration to what needed to be immediately available and what could have been integrated together. It gets a little grating that things like buying and selling items or depositing and withdrawing Pokémon from storage requires navigating back out to the previous menu. I’m already putting Pokemon in the box, why can’t I just pick them up as well.

And the Pokémon themselves are back in full force. There were some standouts, but the last few generations of Pokémon design have felt a bit forced, as if generic everyday object got ‘mon’ slapped on the end and that was the driving force behind making many of the new designs. It feels like there’s a breath of creative fresh air in the new Pokémon in X and Y. This is helped in no small part to the new graphics and engine. It won’t be the first time that you’ve seen Pokémon in 3D, but it’s a first for one of the core games on handheld. The switch from sprites to animated models looks great, and with a little creative camera work and effects, battles are a lot more visually enjoyable.

Bottomline: Pokémon X and Y is packed with a world to explore, activities to delve into and plenty of Pokémon to capture. You’ll get caught up in Pokémon X and Y for hundreds of hours.

Recommendation: Unless you actively hate the franchise, Pokémon X and Y belongs on every holiday list this year.

This review is based on Pokemon Y because I didn’t want a Princess Mononoke knock-off deer.

8 Most Exciting New Pokemon in X and Y