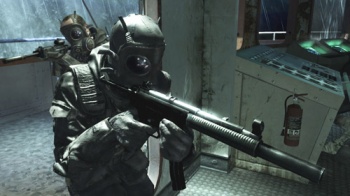 The Speaker of Connecticut’s House of Representatives has sent a letter to leading game publishers urging them to end the practice of licensing real-world guns for use in videogames.

Electronic Arts said earlier this year that it would no longer license real-world firearms for use in its games, and now the Connecticut Speaker of the House J. Brendan Sharkey is calling on other big players in the videogame industry to do the same thing. In a letter sent to Activision Blizzard CEO Bobby Kotick, Take-Two Interactive CEO Strauss Zelnick, Valve Managing Director Gabe Newell and ESA CEO Michael Gallagher, Sharkey said “the industry practice of videogame publishers entering into licensing, marketing or other financial arrangements to feature real guns in their games blurs the lines between fiction and reality in ways that can have tragic consequences.”

Although he acknowledged that “research has shown little connection between the virtual gun violence depicted in your games and the actual gun violence that claims the lives of 33 Americans every single day,” Sharkey nonetheless made a point of noting that Sandy Hook mass murderer Adam Lanza was an “active” Call of Duty player and that the Bushmaster rifle he used appears in the game.

“Games designed to recreate the experience of wartime carnage and criminal violence constitute protected speech under the provisions of the First Amendment,” Sharkey wrote. “But there is little to be said in defense of an industry-wide practice of arranging licensing deals with gun manufacturers for the rights to use the make, model and visual design specifications of their real-life weapons.”

“I write to you today to request your cooperation in ending the nefarious relationship between videogame makers and gun makers,” he concluded. “Our communities, our country and our children are counting on your leadership on this important issue.”

Describing a legitimate and possibly even legally required licensing deal as “nefarious” is a little over the top and I’m not really a fan of how Sharkey admits the lack of evidence connecting virtual and real-life violence and then in the next paragraph slides into talk about “blurred lines,” but regardless of how you feel about the underlying sentiment I think it’s also rather badly misdirected: the real-life Bushmaster, a “versatile and useful gun” with flash suppressor and 30-round magazine, is still available at your local Walmart.