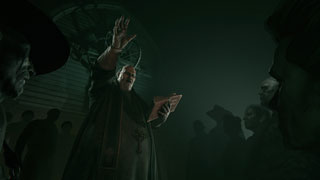 Red Barrels has announced that Outlast 2 will release in late April alongside the Outlast Trinity collection.

Outlast 2 was originally slated for launch in the fall of last year, but back in August, the game was delayed into early 2017. Today, Red Barrels has announced that the much-anticipated horror game will launch late next month.

Much like its predecessor, Outlast 2 will put you in the shoes of an investigative journalist, but this time around you’ll be part of a husband-wife team, Blake and Lynn Langermann. After heading into the Arizona desert to look into the murder of a pregnant woman, Blake and Lynn are separated after a helicopter crash. As Blake tries to find his wife, he can’t fight back, and can only use his camcorder to see in the dark.

Alongside the release of Outlast 2 will be Outlast Trinity. Trinity is a physical series bundle that packs Outlast, Outlast: Whistleblower, and Outlast 2 into one box. While Trinity won’t come to PC, it will be available on PS4 and Xbox One for $40.

All the Mass Effect: Andromeda Multiplayer DLC Will be Free