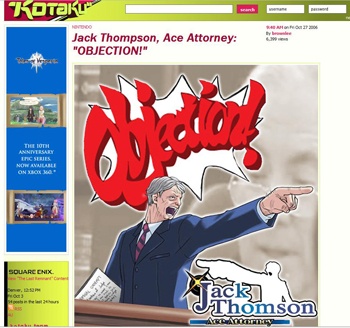 Remarks this week from former ESA President Doug Lowenstein are an accurate description of a problem that doesn’t exist. In a Letter to the Editor to Kotaku, Lowenstein describes disbarred attorney and anti-videogame advocate Jack Thompson as videogame news “crack.” He goes on to suggest that game news sites such as Kotaku forsake at least a little of the time they are spending taunting Thompson to consider their own culpability in unduly extending the disgraced attorney’s fifteen minutes of fame into years.

Kotaku editor Brian Crecente takes a reasonable and common position in response that mirrors much larger media outlets and broadcasters. Crecente defends the allegedly excessive and sensational coverage as news that his readers wanted to read. It is a microcosm case of a big question in this age of maximum reportage, with 24 hour news cycles, but it is also another in a long line of conflicts about the uncomfortable balance between gaming news as entertainment versus information.

The first question, and perhaps the most important, for our relatively small and insignificant eddy in the global information stream is simply this: Is there any such thing as important gaming news?

After all, Lowenstein is ultimately talking about the responsibility of the gaming press in the kinds of broader contexts usually reserved for traditional media and how it sets the tone for discussions of gaming news. This approach borders on its own kind of hyperbole, and makes it sound like the gaming press is handling issues of foreign affairs and fiscal policy. Ultimately, while someone like Thompson may suggest that gaming issues are matters of life and death, it’s that kind of extremism that makes him comical to begin with.

But, neither can we ignore the fact that gaming is now an industry that measures its revenues in double-digit billions. It is a bastion of growth and solvency in a global economy that seems to be on a permanent vacation. Gaming news, despite the recreational nature of its topics, covers businesses that have significant resources, cultural significance and whose ups and downs affect the lives of thousands of investors and workers. Had Thompson been even slightly more successful in his crusade, the results, or rather the consequences, might have been measured in ten digits.

But, of course, Lowenstein is as concerned about tone as content, and without precisely saying so, the implication is that the level of discourse that Kotaku participates in is on par with schoolyard taunts. Kotaku defends its coverage as relevant and investigatory, which seems legitimate on the surface, but casually attempts to assume the point that even good journalism can be married to Photoshopped images and snide commentary.

Here’s the thing, both of these gentlemen are simultaneously right and wrong. 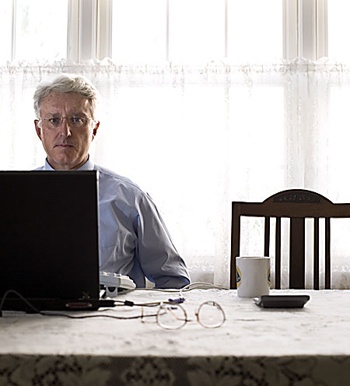 Brian Crecente, whose work I respect and whose work I enjoy, seems to want to have it both ways. He’s not alone. I’d suggest that most gaming blogs attempt to strike a virtually impossible balance between journalistic credentials and humorous content. But, is it really fair for anyone to paint themselves with the brush of responsible news service when they pull out the Jack Thompson piñata for frequent thrashing, often with comical pictures?

Not really, but to leave it there misses the broader point.

While I find myself agreeing with the fundamental point that Doug Lowenstein makes, being that places like Kotaku played a substantial part in prolonging Thompson’s exposure, I don’t think I agree with his underlying concern that gaming blogs really have the higher responsibility that he ascribes. Put simply, Crecente and his peers are doing a reasonable job of appealing to their market while offering meaningful content.

In the end, it’s not Kotaku’s job to make or break Thompson, or anyone else for that matter. Ultimately, that is the domain of a legal community, which ultimately shouldered the attorney with exactly the kind of disgrace he had earned. Much as we malign the processes at work in the bureaucracies of the world, they usually can be dragged kicking and screaming toward the right answers, just as we’ve seen with failed anti-gaming legislation and just as we now see with the ultimate exposure of Thompson.

It is certainly valid to question whether the quality of gaming journalism as a whole should be improved, but in the process we don’t need to decide to deride every outlet for meeting the mandates of their audience. Kotaku does not aspire to be Gamasutra, and the fact that both exist serving different masters is a testament to the power of online gaming commentary, not a strike against it.

To be very blunt, Lowenstein is likely right that Kotaku and its peers played some part in Thompson’s visibility, but with all due respect, as a former head of the ESA that was his problem, not Kotaku’s. The fact that he declined to engage with Thompson is entirely appropriate to his job, and conversely that Kotaku played its part in exposing the senselessness of extremism is equally appropriate to its job. The price we pay for the value of entertainment, content and information that we get from gaming blogs is that occasionally we get a few extra weeks with someone like Jack Thompson. As long as we can rely on the mechanisms that ultimately deconstruct those extremists, it is an acceptable fee.

Sean Sands is the co-founder of gamerswithjobs.com and a freelance video games writer that never realized he could make and break careers with his words.