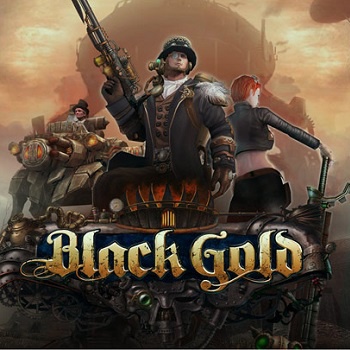 Snail Games is a Chinese outfit, and it has brought tons of free to play browser games to the world. Over the last few years, the company has diversified into the 3D MMO market with games like Age of Wushu. Realizing AoW deep Chinese mythology and pure sandboxeyness was a hard sell for the Western market, Snail decided to develop Black Gold to focus on gamers this side of the Pacific. And what better way to do that than to tap into the age old conflict between industry and nature, or rather steampunk and fantasy.

There’s two factions in Black Gold, split by a mountain range on the game’s map, and they have very different beliefs. The “fantasy” faction has classes like mages and demonhunters and races like dwarves and the cat-like Kosh on their side while the steampunks concentrate on technology and feature races like brutes (big shapeshifters) and vampires. Humans have representatives on both sides, because you know, they like to fight each other anyway.

As for classes, there’s 8 shipping with the game and they are locked to 4 per faction. The ones I was most interested in were the Inquisitor and the Mage. Each class has 3 different specializations, with the gunslinger being the most exciting for the inquisitor in that he can build and improve his own weapons. The elemental mage sounds really fun because you can use your spells to introduce devastating combinations, such as burning a foe and then engulfing him in a hot whirlwind with an air attack.

The combat in Black Gold is action-based – no auto-targeting – and you have a limited amount of abilities you can equip from your greater arsenal. You have 7 “points” of actions, and lesser attacks count as 1 point while bigger, more powerful attacks cost 7. “You could put all lesser attacks on your hotbar, that’s more of a PVP build, but you’re better off mixing and matching,” said Colin Miller, an associate producer for Snail Games USA.

On top of that, you can jump into vehicles to battle it out in PVP, with the steampunk side obviously using mech-like constructs you can craft, while the fantasy faction summons large beasts and spiders you can ride into battle. Steampunks use guns and explosive weaponry, while fantasy relies on acid attacks or shooting thorns. The theme of technology versus nature seems to infect almost all of Black Gold‘s design choices.

Right now, the game seems heavily focused on open world PVP, with guilds able to control points on the map. You can set down garages/farms in these areas, once you control them, and use those facilities to improve your vehicles or provide buffs.

On the PVE side, Miller didn’t have a lot of information to provide – the game is still in testing – but there will be instanced dungeons and questlines to explore. The story will unfold in a more branching style as opposed to the linear travel from quest hub to quest hub.

I got to play a little bit of PVP at the booth in an arena Snail created specifically to demo at E3. The combat is fast-faced, so it was a little confusing to jump right into fighting with a fully developed hotbar of abilities I didn’t really understand. All that aside, it’s simply just fun to jump onto a huge elephant and run over some unsuspecting vampire gunslinger.

Snail Games hopes for Black Gold to hit the Western market in Q4 2014 on the PC. Given the recent announcements of MMOs spreading to next gen consoles, Snail is exploring the option of bringing Black Gold to Xbox One or PS4 in the years to come.