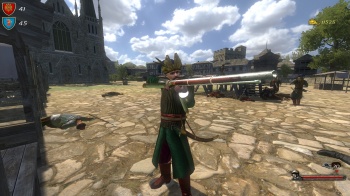 I’ve made no secret of my love of the PC game Mount & Blade: Warband. For the uninitiated, TaleWorlds Interactive built an open world for the player to recruit, equip and train his own warband and travel across the land looking for trouble. Play is split between the realistic and real-time action of first-person medieval warfare and the strategic view of a fictional landscape populated with towns, cities and castles. Published last year by Paradox Interactive, Warband was a surprise hit for the Turkish game developer TaleWorlds, with fans across the globe contributing to over 650k in total sales for the franchise. So it didn’t take a genius to guess that one of the “unannounced” projects that we were set to learn more about from Paradox last week was going to be from TaleWorlds. That secret project is the “standalone expansion” Mount & Blade: With Fire and Sword, and it represents the next step in warfare technology.

Yes, this is your boomstick. The deep bass boom of a musket firing, aimed at a rider speeding towards you and watching your opponent’s body crumple, is way more satisfying than it should be. But what was the inspiration to take one of the best medieval combat simulators on the market and potentially muddy it with guns?

“The 17th Century is a really cool period in history, because gunpowder is coming up in use and power and you get to see things like early hand-grenades, muskets and pistols,” said Mikail Yazbeck, designer for TaleWorlds and producer of With Fire & Sword. The guns and grenades actually make for an interesting contrast between the swords, bows, and horsemen of the older times. “People want this new technology versus old technology struggle.”

The concept of gunpowder in the Warband engine actually was one of the first things that fans of the game modded into the setting, so Yazbeck took that as a vote of confidence. “Fans made mods to put guns in the game early on, so we knew that they wanted to see some sort of setting that had that gameplay style,” Yazbeck said. “What they’re modding can be seen as a wishlist sometimes. If we think that it’s [a feature] worth doing, then we consider [adding] it.”

The historical setting is a departure for the series. The title With Fire and Sword comes from a Polish historical novel published in 1884, written by Henryk Sienkiewicz, about the era in northwestern Europe when muskets began to be used. In the game, you can fight as one of five factions: the Polish, the Cossacks (from the Ukraine), Russians from Moscow, the Swedes and the Crimeans. Each will have their strengths and weaknesses; the Russians will be an “easier” faction to control while if you want a challenge, controlling the Poles might be more up your alley. 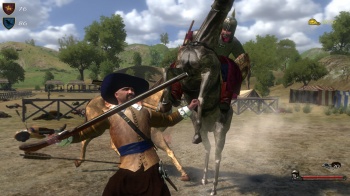 While some (myself included) might miss the fictional setting of Calradia, it seems that the community responds the most to the real-world accuracy of Warband. To that end, Yazbeck is busy adding features to the strategic level of play that will make With Fire and Sword seem more realistic. Instead of villages and towns just being places you go to “beg for babies” as what Yazbeck called recruiting soldiers, there will be structures you can build such as universities, smithies and even banks. Banks will be able to issue loans, which will come in handy for those who play the game as a complex economic sim. Don’t welch on those loans though, the banks will post bounties on the heads of people who don’t pay them back.

One of the problems that Warband had is that if you got attacked while traveling, there was very little you could do defensively. In With Fire and Sword, Yazbeck’s answer to that is protected caravans, which surround your camp with a rectangle of wagons. Sure, marauders on foot can still “hop the fence,” but it prevents cavalry from being overpowered. The mechanics of a siege on a castle will also provide more options than just storming over the wall. You can play out your dastardly fantasies by bribing a guard to let you in or poison the water supply. Failing that, a few mines will blow a hole in the wall that your forces can storm through.

What about the guns being overpowered? Will a force armed only with swords, axes and bows be quickly decimated? Not exactly. Firearms are definitely more powerful than standard weaponry, but they are limited in With Fire and Sword with a very slow reload time and crappy aim. So, if you’re lucky, you can get a shot off at a charging knight in full armor, but if you miss, then his sword is still going to take your head off before you can reload. As well, a skilled marksman with a bow is going to hit his mark way more than an equally skilled guy with a pistol. As with all things in war, using guns is a tradeoff.

As I was getting the demonstration of the game from Yazbeck and trying my own hand at shooting some Cossacks, the CEO of Paradox Interactive, Fredrik Wester, walked by and asked a very important question: “When are you going to add a ‘loot all’ button?” Wester admitted that he loved Warband, but he complained that not being able to just take all of the loot from a defeated force with a single mouse click is frustrating, with which I heartily agree.

Yazbeck assured both me and Fred that the team is working on fixing that, and many of the other nagging oversights in the game’s interface. It won’t be a complete overhaul to the game engine, he’s saving that for the inevitable sequel, but With Fire & Sword should be a much better game.

So wait, Yazbeck and the rest of the team at TaleWorlds is working on a true sequel to Mount & Blade: Warband? Well, yeah, duh. As Yazbeck pointed out, all you have to do is look at his Facebook page and read what he’s working on under his employer info: “Currently designing Project Obvious: the sequel, exciting!”

Yep, once you think about it, it is pretty obvious.