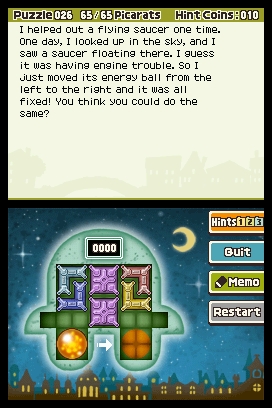 We should really be tired of hanging out with Professor Hershel Layton by now. Charming though he may be, his games are all cut from the same basic cloth, combining a bizarre mystery with an even more bizarre assortment of puzzle-obsessed characters. And yet his latest adventure, Professor Layton and the Last Specter (DS) is just as enchanting as his very first outing. The typical Layton trappings are there, from the way the story progresses to the characters to the quips about his hat, and even some of the puzzles will feel a bit too familiar, but they’re presented so perfectly that you’ll quickly forget you’ve seen any of it before.

Last Specter begins with Layton receiving a letter from his old archaeology pal Clark, who begs him to come to Misthallery and investigate the enormous specter that’s been laying waste to the town. Layton is joined by his new assistant, Emmy, who’s happy to deliver a roundhouse kick to the noggin of anyone who gets in the way of the investigation, and they quickly discover that the letter was actually sent by Clark’s young son, Luke. Yes, that Luke – Last Specter goes back in Layton’s timeline to before Luke became the Professor’s number one helper. Or does it? This is a Professor Layton game, after all, which means very little is as it appears to be.

As Layton and his helpers investigate the specter, which, according to local legend, has long been Misthallery’s protector, they encounter a bewildering assortment of townsfolks, all of whom seem to be obsessed with puzzles. You earn Picarats for solving each puzzle , with tougher teasers raking in more points. Each wrong guess decreases the number of Picarats a puzzle is worth, but you don’t just have to rely on your brainpower to work out the correct solution. A built-in Memo function lets you write directly over the puzzle – an invaluable aid for math-based problems or mazes and if you’re just plain stumped, you can buy hints with coins you find by using the stylus to poke around the town’s scenery. Each puzzle has four hints that begin with a tiny nudge and end with a Super Hint that basically clobbers you over the head with the answer. It doesn’t actually say, “Duh,” but it’s clearly implied. Last Specter handles the hints perfectly, making them just difficult enough to access that purists won’t be too sorely tempted to “accidentally” use them, while those tired of banging their head against the wall can proceed and put the frustrating mind-bender behind them.

Just playing through the game can be enough to improve your puzzling acumen, however. The more complicated a puzzle is, the greater detail that its solution and hints provide; this can be particularly insightful when working through a teaser whose solution seems to require higher math skills. Last Specter will frequently provide a new way of tackling this kind of problem that doesn’t require any actual math, a perspective that will serve you well as the game progresses and the puzzles become more difficult. You could use math to figure out how long a lightpost’s shadow is, or you could just consider how it compares to the shorter post next to it. Cutting a triangular cake so that the ratio of the two pieces is 4:5 sounds pretty complicated until you think about the properties of triangles. Math definitely isn’t my strong suit, so I really appreciated learning new ways to approach those kinds of puzzles.

The gameplay of Last Specter is all about finding and solving more than a hundred puzzles, but you’ll swiftly find yourself wrapped up in the mystery of Misthallery as you hunt for them. The animation and voice acting are, as usual for a Layton game, so exceptional that you’ll be delighted to put down your stylus and just watch whenever a cutscene pops up. The voice work is particularly deft, creating endearing characters out of ridiculous templates. A proper British gentleman that teaches archaeology, solves mysteries, and is obsessed with a really big hat is pretty damn absurd, but Christopher Robin Miller imbues the Professor’s dialog with a quiet earnestness that transforms Layton into the trusted mentor we all wish we had.

Solving certain puzzles will earn you one of Last Specter‘s minigames, which are very reminiscent of those in the previous Layton adventure, Professor Layton and the Unwound Future. You’ll collect words to use as commands for a puppet show, lay track to guide a train around increasingly cluttered courses, and place bubbles so that a fish can scoop all coins as he bounces around his tank. You don’t have to do any of these minigames to complete Last Specter, but they make for a nice break from the more complex brain twisters of the main game. The fish will even start pointing out hidden coins and collectibles once you’ve finished enough of his tanks. One of the extras, London Life, is an RPG in which you live in and explore a very tiny London. You get a job, decorate your flat, do quests for NPCs – it’s an fun little diversion that’s more fun if you can persuade some of your real world pals to come visit via WiFi.

Bottom Line: Another Professor Layton game, another bit of puzzling brilliance. Some of the brain teasers feel a bit recycled – instead of foxes and chickens, you’re shuttling dogs and cats across the river, for example – but there’s more than enough variety to warrant doggedly tracking down every last one. But if you only solve the ones you need to move the story forward, that’s ok, too.

Recommendation: If you own a DS and have a brain, you should pick it up. You just never know when you’re going to have to figure out how to cut a table cloth into three pieces that will form a perfect square, after all.

Battlefield 3 Devs Are All About The Review Scores