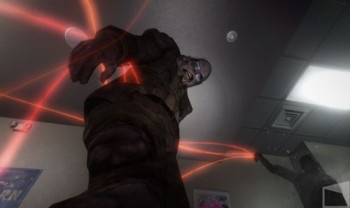 Here’s some complication we all probably could have done without: Project Origin has been renamed to F.E.A.R. 2, while the status of the original F.E.A.R. 2, which may or may not have been in development, is unknown.

This one needs some explanation, and I suggest you pay attention. In 2005, Sierra published F.E.A.R., a horror-themed FPS developed by Monolith that was supremely awesome. But prior to that, in 2004, Monolith was acquired by Warner Brothers Interactive Entertainment, a different videogame publisher, and while this didn’t have any real impact on the original F.E.A.R. title, it did mean complications galore for the inherent sequels.

The reason, you see, is that while Monolith retained the rights to the game’s storyline and characters, Sierra – and, by extension, Vivendi – owned the F.E.A.R. name. As a result, Monolith began development on what it considered the “true” sequel to F.E.A.R., named Project Origin, while Sierra allegedly went to work on F.E.A.R. 2, built around an entirely new story. If this wasn’t goofy enough, it was determined that Project Origin would essentially ignore the events detailed in the two F.E.A.R. add-ons, Extraction Point and Perseus Mandate, a kind of scorched-earth retconning that’s pretty clearly more about making a point than making a game.

But as a result of the recent merger between Activision and Vivendi, everything changed once again. Activision, as expected, did some slash-and-burn of its own as the expense of Sierra, which led to (among other things) the return of the F.E.A.R. 2 name to the open market, presumably the result of Sierra’s project being killed. Monolith and WBIE seized the moment, announcing today they have acquired the F.E.A.R. name, and the right to a proper title for their sequel. Because of the considerable marketing already done using the Project Origin name, however, as well as its ties to the F.E.A.R. community (the name was chosen as the winner of a contest), the full name of the sequel will be F.E.A.R. 2: Project Origin.

Smile and Nod: Sailing to My Doom