As I’ve mentioned in the past, I tend to avoid reading other people’s opinions of games I intend to review, professional or otherwise (which is why you should really stop emailing reviews to me, email them to Steve or Susan or someone, they always appreciate the attention). So the first time I heard about the popular opinion of Prototype 2 was while going over some of the comments on my ZP video. Apparently it’s generally reviewed kinda badly. I mean, some reviewers gave it, like, 6 out of 10. In professional reviewing circles that’s the equivalent of burning it to the ground and salting the earth. My critique was a comparatively gentle pricking.

This did surprise me a little. I review based on how much fun I’m having, and I had fun with Prototype 2, so yeah. It’s true that it could have done more to differentiate itself from its predecessor, but my feeling was that it could have done a hell of a lot less, too. I guess if I had a big problem it was with the story, and how I had a prediction for how it would turn out that didn’t prove correct because I was apparently giving the writers way, way too much credit.

Spoilers from here on out, for both Prototype and Prototype 2, so be ready to slam your laptop lid closed and scream if you’re planning to give them a chance anytime soon.

I guess the new protagonist wasn’t particularly inspired, and the attempts to make him more sympathetic were severely misguided when held against the average behavior of a player in such a casually murderous sandbox game. Plus he was black, and all the other reviewers are probably a bunch of big racists. Alex Mercer, protagonist of game one and antagonist of game two, made for a much more interesting player character because his moral lapses were considerably more appropriate, and gave him a depth beyond some stubborn bloody-minded adherence to what we personally consider “right and wrong”. Are there any of us who can say we wouldn’t start surfing on housewives if we acquired powers like Mercer? At that point, should we even still allow ourselves to be bound by human ethics?

There was a twist at the end of Prototype that Prototype 2 doesn’t seem to acknowledge at all. Which is good, because it means you can play Prototype after Prototype 2 and it’ll still surprise you, but at the same time, it’s a waste of a really quite intriguing premise. You see, it’s revealed at the end of Prototype after Mercer completely rebuilds himself from the greasy stain left behind by a nuclear blast that the entity we thought we were controlling was not actually Alex Mercer, strictly speaking. It’s established (and it’s a gameplay mechanic, in a pleasant show of story and gameplay consistency) that when he consumes a human being he also takes their memories and appearances. Alex Mercer is not the superpowered entity itself, Alex Mercer was simply the first person the entity consumed, and then it got confused and assumed that it was Alex Mercer.

So you’re not actually Mercer, you’re the virus itself. That’s why you can shapeshift and regenerate to an infinite degree – there is not a shred of human being in your physical make up, you’re just a big lump of viral play-dough temporarily adopting the faces of humans. All your memories, intelligence and motivations are merely copy pasted from Mercer’s mind. It’s a rather intriguing, existential situation to play around with.

But as I said, that whole business kind of gets ignored in Prototype 2, which is disappointing. The plot deals with Alex Mercer hand-picking humans to turn into shapeshifting superbeings like himself, in order to build an entire army loyal to his cause, acting as hidden guerrilla operatives within the enemy. James Heller, the new protagonist, is one of those. But factoring in the Prototype plot, Mercer is not transforming humans into superhumans, he’s creating more viral entities based on the templates – and retaining the memories – of existing humans. 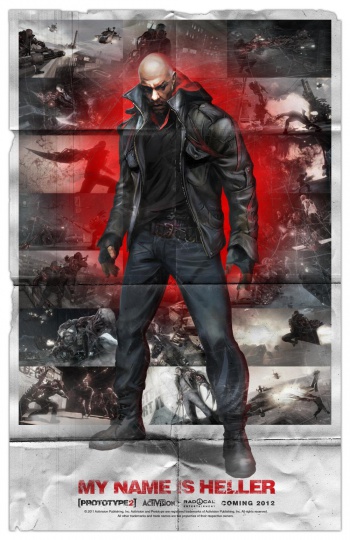 But maybe he’s not even doing that. You see, the Mercer-entity shouldn’t need other people’s help. It can take on any identity and has virtually unlimited mass as long as it keeps consuming people. So my thinking was that Mercer isn’t actually recruiting an army, he’s figured out how to divide his mass to imitate more than one human at a time. The other rival virus-things we encounter in the game are actually all part of the same life-form.

So where does Heller come into this? If the thing that calls itself James Heller is actually just another part of Mercer’s increasingly massive consciousness that thinks it’s James Heller, why is it attempting to stop Mercer’s plans? Well, it’s quite straightforward, listener. Mercer at first takes on a sort of mentor role to Heller, and it’s occasionally mentioned that Heller is Mercer’s “favorite”, meaning that Mercer has a special role in mind for him. The actual game plot doesn’t really pay this off at all, but we can speculate on what the nature of that role might be.

When the virus absorbs a human, I theorized, as well as all the useful stuff like memories and knowledge it also absorbs a lot of inconvenient guilt, self-doubt and empathy for human beings. With big plans for shaking up the world in less than ethical ways, Mercer had to do something to rid himself and his army of all that garbage, so he came up with the idea to section it off. He created a whole separate aspect of his consciousness that would act as the repository for all those inconvenient human feelings. And that was Heller. This also explains why Heller had to have an independent mind. He’s Mercer’s own self-doubt and guilty conscience being allowed to stew all by itself, based upon the template of a convenient hate-ridden widower.

But what Alex Mercer failed to consider is that self-doubt becomes self-loathing, and that’s why Heller starts becoming a genuine threat. Mercer has spread his consciousness too wide, and his mind has fractured. In personifying his own desire for self-destruction he has empowered it and ensured his downfall. Had this been the case, the plot would have had to be completely reassessed. If Heller discovered the nature of his being, he’d have a difficult choice to make. If he continued fighting against Mercer, and destroyed him, then he’d also destroy himself. But on the other hand, if he stopped fighting him, then he’d no longer have a reason to exist and might as well allow himself to be absorbed back into the larger Mercer-consciousness.

But as we know, I was giving Prototype 2 too much credit. Mercer was some Saturday morning cartoon villain all of a sudden and we were just supposed to forget about game one. At the end of the game there’s a climactic battle between Mercer and Heller, which is incidentally bullshit, because when you’re fighting an unlimited shapeshifter that can regenerate itself from a smear then I don’t think it matters how hard you punch it, it’d be like trying to kill water or pizza dough by punching it. But anyway, this would have been a much more interesting scene if they’d factored in my hypothesis. It’d be less boring old good vs. evil and more an existential nightmare in which a schizophrenic disease literally wrestles with its conscience. See, writing triple-A video games isn’t so hard. Put me on the team, coach, I’m ready.