I had more fun than I thought I would doing last week’s “Quit It” column on recurring formulas and devices I’d like to see Hollywood put back in the shed for a few years, so I figured I’d take a second shot at it. And since I’m in a PAX East kinda mood, I’m pointing my gripe-o-matic square at the gaming scene. Here are some well-worn paths I’d prefer game developers would abandon for a while.

“Gasp! It was The Russians ALL ALONG!”

There’s a hysterically absurd moment in the 197th episode of The Simpsons, “Simpson Tide,” where a Russian UN representative mistakenly refers to his country as the Soviet Union. When a fellow rep corrects him that the USSR was dissolved, the Russian cackles menacingly and bellows “That’s what we wanted you to think!” At the push of a button, all of Russia’s “new” flags, parades and iconography flip back over into Soviet-style, Lenin rises from his tomb and a brand-new Berlin Wall pops up out of the ground. Show runner Mike Reiss called the moment the nuttiest the show had ever been.

A decade later, that “nutty” – even for The Simpsons – moment is the literal premise of the supposedly serious Call of Duty: Modern Warfare franchise. And it’s far from the only offender. Vanquish (which I liked, don’t get me wrong) has you fighting Russians from space. More so than even Hollywood, the videogame industry simply refuses to admit that The Cold War is over.

The reasons for this are understandable. The Soviets were the last real-world bad guys with the numbers, technology and slick uniforms necessary to give your game scenario the “plucky American underdog versus overwhelming Evil Empire” vibe that shooter fans seem to crave. The state of real “modern” warfare – where it’s the good guys who have the numbers/tech advantage and the bad guys employing DIY guerilla tactics – just doesn’t work with a genre that’s still stuck firmly in the mindset of WWII mythmaking.

There’s a pervading logic in game design that player characters should be as close to a Tabula Rasa as possible, so that the player can more easily place themselves into that role for maximum immersion. I’m not talking about games with a character customization element, that’s a different issue – I’m talking about avatars who’re technically characters in their own right, but have been intentionally rendered so bland and empty so as to be filled with the player’s persona; faceless homunculi like Master Chief or the (usually) nameless Legendary Hero at the center of most of my otherwise-beloved Dragon Quest games.

Personally, this has never worked for me, because most videogame heroes are actually heroes – selfless, driven and idealistic – while I’m a self-centered pragmatist. Even in first-person games, I’m never given to feeling like I’m inhabiting the main character; as far as I’m concerned he’s going through his story and I’m helping by pushing buttons. So please, by all means, give him a proper name, dimension, backstory, personality, goals and all the other stuff he’ll need for me to give enough of a damn to finish the game.

Whatever you need, it’s on the other side of that door. You move into position, press the “open door” button, and up pops some variation on a slide-puzzle. Oh boy, an Unlocking minigame. 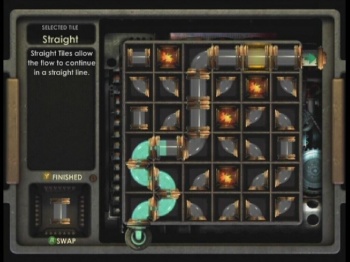 Unlocking minigames have their place and can be cute, but used haphazardly they become clear evidence of lazy padding. Yes, stuff like Myst or Professor Layton is obviously exempt because puzzle-solving is its entire mechanic. Otherwise? No, thanks. Thing is, very few games can properly manage swapping out whole gameplay mechanics; it’s always a dicey prospect to build the majority of your game around one entire set of controls and then suddenly drop a different play-style right in the middle of it. This is also why vehicle sections are often so crummy.

There is a way to do this right, and usually it involves making the unlocking puzzle part of the main gameplay, instead of its own little minigame. The ur-example is probably the Zelda series and its myriad imitators. The puzzles are built around skills or items that you’ll be using elsewhere in the game, and thus unlocking the door is also practice – figuring out how to hit five buttons at once with the boomerang will come in handy for multi-killing enemies with it later. By contrast, having to stop and play a Steampunk version of Pipe Dreams didn’t really add anything to BioShock, at least not for me.

Y’know who I’m sick of? The soothing, gentle-voiced, implicitly-maternal boss lady constantly keeping The Hero abreast of things via walkie talkie, Bluetooth, telepathy, whatever. Nevermind that it’s overused to the point of absurdity and well beyond any level of novelty (it’s no longer a big twist to have Judi Dench playing M, basically) but it paradoxically goes a long way toward reaffirming limiting gender-role archetypes: Men are good for fighting and action, women are good for nurturing and talking men through action. Blegh.

Yeah, I know, Master Chief and Cortana are supposed to have this grand, symbolic, utterly chaste (because sexuality would make him weak and her tainted) Boy Meets A.I. thing going on, but, I’m sorry, to me, it always seems like he’s a giant bionic seven-year-old on his first solo hike who needs to keep calling his Mom up to tell him how to do stuff “Cortana, they’ve come undone, again.” “It’s alright, John, just repeat after me: ‘The rabbit goes aroooound the great big tree …'”

“Destiny” is already an overused shortcut to getting an ordinary person into Hero’s Journey mode, and the laziness is only compounded when the entire prophecy turns out to be exactly true … to the point where you have to wonder why anyone bothers to do anything in these worlds without simply consulting the Big Book of Predestination first, just to see how things will turn out.

When’s the last time a prophecy turned out to be wrong, or heck, even misunderstood? Even J.R.R. Tolkien, whose reverence for divinely-dictated fate was second to none, couldn’t resist tweaking destiny’s nose a bit. One of his major heavies, “The Witch King,” charges against his human enemies with wicked confidence, partially derived from a long-foretold pronouncement that he will not fall “by the hand of man.” Evidently, fine-print’ll get ya even in Elvish – he falls when his last opponent turns out to be woman. 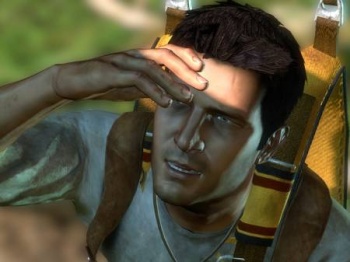 Or heck, forget the loopholes, what if the prophecy is just complete bunk? In the movie Drive Angry, a dead man escapes from Hell to save his infant granddaughter from being sacrificed by a cult of redneck Devil Worshippers. Funny thing, though – while the hero and at least one other character actually know The Devil personally (“A quiet man. Well-read.”) – he actually has NO association with these guys: They’re just nuts, their whole prophecy and belief system is malarkey, and the fact that they’ve come up against actual Hellspawn is entirely coincidental. Oops!
That’s an exchange I’d like to see the next time I’m midway through an RPG:

Hero: “You destroyed my village!”
Villain: “I needed to destroy you! He who was prophesized to stop me!”
Wizard: “Say what? Dude, that prophecy is was a total load – we wrote that crap out like thirty revisions ago! Homeboy wouldn’t even know who the hell you were if you hadn’t burned up all his stuff!”
Villain: “…damn it.”

Everything is illuminated… seriously, everything.

Am I the only person who doesn’t like it when every melee-attack is accompanied by a big glowing “whoosh” of what looks like really sloppy light-writing? Here’s a novel idea: Instead of turning the entire battlefield into a disco every time I need to shake people off me, how about you trust that I’ll know it was a heavy attack by the tons of dead guys flying backwards away from me?

All comedy is Dane Cook

Brief memo to game designers: “wisecracking heroes” like Mal Reynolds, Ash Williams or John McClane work because those characters are actually funny. If you’re going to make your hero an abrasive, flippant jerk – hire someone who can actually write comedy. There’s nothing worse than a guy who only thinks he’s the cleverest cat in the room, unless you’re aiming to parody that sort of guy like Duke Nukem or Bulletstorm are.

Case in point: Nathan Drake is the most innately-hateful protagonist since Leisure Suit Larry. The second Leisure Suit Larry. Every time he opens his mouth, I want to kick his teeth down his throat. These are not endearing traits in a hero. (Incidentally, this is also why I worry that the people who keep clamoring for the movie version of Spider-Man to “joke around more” like he does in the comics are in for a serious “Monkey’s Paw” lesson sooner than later.)

I am so tired of playing as the Angry Young Man. And not just in the sense that most game heroes are men, and young, and angry. I’m talking about the very specific species of petulant, spitting-mad little whiners at the forefront of titles like Infamous. I understand that developers (particularly Western developers, though Japan has its own variations) think that the real life versions of Cole McGrath are their target audience – which is a big problem in and of itself – but even then, why assume that even they’d constantly want to play as their own miserable selves?

The heading on this entry is from an old Billy Joel song, incidentally. Go listen to it (main song begins at 1:51), or just read the lyrics, and think about just how perfectly it describes so many gaming protagonists. That song is from 1976. How pathetic is that? Our modern badass heroes can be handily summarized by a disco-era ditty by the freakin’ Piano Man.