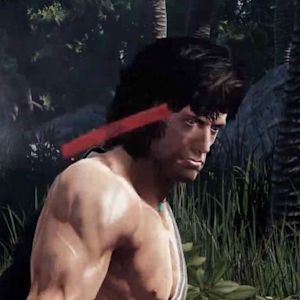 Rambo: The Video Game starts out surprisingly fun. Not “good” in the traditional sense, but certainly not as offensive as one might expect from a random licensed game of evident poor quality. The first level, an on-rails shooting section in which dozens of identical enemies are gunned down, is at least competent, and the use of a cover system and active reloads keep things mildly interesting.

The abysmal quality of the production is amusing at first. The graphics are terrible, with enemies seemingly cloned from John C. Reilly, and only half of Rambo’s head rendered (you can see background details through his hair, where his skull ought to be). Cutscenes are the kind of poorly compressed, artifact-laden monstrosities you’d see in PC games from the 90s. Audio sounds like it was ripped from a VHS copy of the original movies. Naturally, broken physics and glitches abound.

Then the game continues, and an entire level made up of nothing but on-rails stealth quick-time-events appears. Yes … on-rails, stealth, and QTEs combine to form an entire chunk of gameplay.

Shockingly, it all manages to go downhill from there.

The more it continues, the worse Rambo gets, and the less charm can be mined from the “so bad it’s good” schtick. As combat steadily becomes more unhinged, the camera swings wildly and disorients the player frequently, and as QTEs grow steadily more repetitive, Teyon’s insulting homage to an 80s classic rapidly wears out whatever ironic welcome its opening gambit might earn.

Ostensibly an on-rails arcade shooter, Rambo: The Video Game is at its best when it’s mindlessly throwing indistinguishable enemy soldiers at the player. “Best” is a relative term, however, because it’s all garbage. The game was made with no visible expertise, so obviously there’s no balancing in the combat. Dozens of enemies spray bullets constantly at the player, making the cover system less of a tactical feature, and more of a necessity to try and counteract the lack of proper pacing and structure. The targeting reticule is hard to control as ducking and moving constantly switches one’s field of vision and makes enemy positions hard to predict.

If playing with a controller, this can be mitigated by a lock-on system that is easily exploited by targeting opponents hidden behind cover. The mouse offers better control of the reticule, but removes the lock-on feature. It’s very weird to say that a controller is superior to a mouse in a shooting game, but locking on becomes damn near essential once it starts being lethal to have your head out of cover for more than half a second. 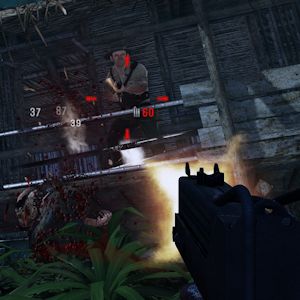 Of course, there are some moments where cover can’t be used (often arbitrarily, as sometimes the cover you were previously using is right next to you and you haven’t moved!) or enemies move to shoot you while you’re hiding. Since reloading is a frequent requirement, one is left frequently vulnerable to attack. In a competent rail shooter, the player usually picks up a sense of the best time to reload thanks to a little something I call good level design. In Rambo, you’re better off just doing it whenever, because there’s never a good time.

Of course, there’s never a good time to do anything in Rambo, because this is a game in which good times cannot be had.

The QTE sections are almost laughable in their laziness, and can never decide if they’re first or third person. Sometimes you’ll be in first-person view and the camera will swing around to show Rambo, in third-person, from the front. I am subsequently led to believe that you don’t actually play as Rambo in the game, and are instead some random war hero who John is stalking and stealing the credit from.

In any case, Johnny just runs or sneaks about and you press buttons when you’re told. Hilariously, there are equippable perks in the game that give you minor gameplay boosts, and one of them is the ability to not fail any QTEs. It turns the game into Beyond: Two Souls, albeit with a slightly better story. You won’t get points if you equip the perk and ignore button prompts, but really, who cares?

Yes, there are perks. Up to three can be equipped, and one can also level up, adding skill points to things like damage reduction or more Wrath. Wrath, incidentally, is a temporary rage state in which you regain health for kills and have unlimited ammo. You can still reload while raging, however, so it might take a while to realize your ammunition isn’t running out. This game makes no sense.

That’s it, for the most part. On-rails shooting sections on par with the most forgettable of budget games, and on-rails stealth sections that consist of nothing but QTEs. Sometimes the QTE bits are tossed into the action segments, and there is an utterly appalling turret section that, for some reason, causes the camera to convulse sickeningly. I don’t understand it. I don’t understand anything about this game.

Bottom Line: So this is Rambo: The Video Game. Ugly as sin, flimsy beyond belief, and chock full of some of the worst barely-interactive gameplay you’ll “enjoy” so far this year.

Recommendation: Watch Hot Shots: Part Deux. Like this game, it makes an absolute mockery of the Rambo films, but it’s at least trying to be funny on purpose.

Report: Sony to Unveil Its VR Gaming Headset at GDC 2014