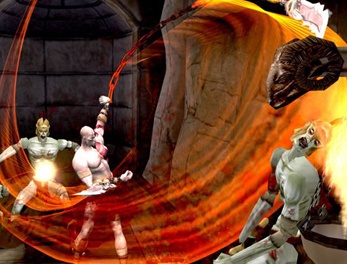 The celebrated PSP developer has two unannounced projects currently in the works, one of which could possibly be for a non-Sony platform.

The history of the Irvine-based Ready at Dawn thus far has been short, but extremely sweet for both Sony and PlayStation Portable owners. In 2006 it released its first game, Daxter (a spin-off of Naughty Dog’s Jak and Daxter series), to both critical and financial success, having gone on to sell more than 2 million copies worldwide. It followed that up with yet another take on a Sony property with God of War: Chains of Olympus, which was one of the most talked about portable titles of 2008. Ready at Dawn has already proven itself more than capable of delivering high-quality, console-like experiences in a portable format, and while its port of Capcom’s Okami was great, its fans are looking for it to make that next, huge leap. According to a social networking snafu, those dreams may just be coming true.

PlayStation Lifestyle caught a quick glimpse of the LinkedIn profile of Ready At Dawn lighting artist, John Enricco, who updated his page to make note that it is currently working on an original title for both the Xbox 360 and PlayStation 3 platforms. As we’re all typically quick to shout, “Screenshot or it didn’t happen,” its best to consider this a rumor for now.

While recent reports have leaned towards the contrary, Ready at Dawn had announced in June 2008 that they were packing up its PSP development units and moving on to different platforms, though many expected them to stay tuned in with Sony, churning out more exclusive titles. According to its website, Ready at Dawn currently has two projects in the works with no details announced for either one, so at this point, anything is possible.