I’ve always loved Westerns, or more colloquially “Cowboy Movies,” which supposedly makes me fairly unusual for a man of my generation. Westerns, we’re continually told, are deader than dead – and judging by the box office of almost every Western released in my lifetime, it seems true. How does that happen, exactly, to a genre that was once among the most popular pop mythologies not only in America but across the world?

For my part, I blame deconstruction gone too far. From about the 1970s onward, American popular culture did an exemplary – and very necessary – job of deconstructing and owning up to the darker currents of racism and colonialism running through the genre, but I wonder if we didn’t hastily throw out what was fun, good and even redeeming about Westerns along with the bad stuff. Consider: In a few short decades, we’ve gone from a movie world where Native Americans were always the bad guys to a movie world where Native Americans are all but nonexistent – and no, the Na’Vi don’t count.

So, Westerns are dead, but then the videogame Red Dead Redemption – pitched right across the plate of the audience that’s supposed to be least interested in six-shooters and sagebrush – comes out to great reviews and big sales. Is this the spark that makes the Western catch fire again? You never know. Who could’ve guessed that Johnny Depp and a tub of eyeliner would makes pirates cool again?
Or maybe it’s just wishful thinking on my part. But if there are any youngish gamers out there who’re feeling cowboy curious after Red Dead, here’s a quick rundown of movie westerns that might also strike your fancy. Not necessarily the best, not necessarily the worst, but the stuff that’ll give you a rough estimate of where it’s all coming from.

Director John Ford and actor John Wayne – the two most towering names in the Western genre – unite for the first time in what’s often called the birth of the grownup cowboy movie. A stagecoach whose passengers represent multiple levels of society (a lawman, a doctor, a prostitute, a widow, etc.) pick up an unexpected new face when the lawman arrests wanted fugitive The Ringo Kid (Wayne). His presence inflames an already edgy clash-of-classes, but he comes in handy when they learn they’re on a collision course with Geronimo’s Apache raiders.

A slew of interesting characters forced into a single, yet mobile, location that rolls from travelogue to drama to chase to action. Why were Westerns so popular? Because you could tell stories like this.

Ford and Wayne again, this time plus Henry Fonda, in what’s the main template for both the “Cavalry Western” and “Siege Western” subgenres. The two stars are U.S. Cavalry officers clashing over how to run an isolated outpost in Indian territory. Wayne is the older one, who believes in treating the Natives with respect and understanding, but less-experienced Fonda is prejudiced and doesn’t think they’re worth the effort. When a corrupt Indian Affairs official stirs up a violent rebellion, they’re both stuck in the middle of it. 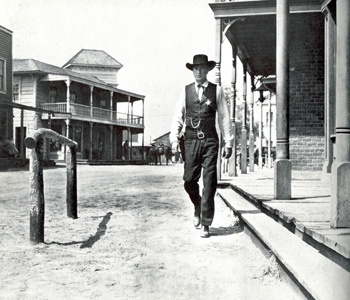 Marshall Will Kane (Gary Cooper) is retiring from the life of a Western lawman, having just that morning married a devoutly-religious woman who abhors all violence, but then he gets some bad news. Frank Miller, his arch enemy, has dodged the gallows and is heading for town with his gang to kill Kane – and anyone who gets in the way. He’ll be there at noon. It’s 10:35. Kane has 85 minutes (it takes place in real time) to round up some deputies and mount a proper defense, but no one will help him.

Everyone is either fleeing, refusing to fight or is already leaning Team Miller. At the moment you find out who your real friends are, Will Kane learns he doesn’t have any. He’s the One Brave Man surrounded by both evil and weakness. What now? Abandon the ungrateful citizens to their cowardice and leave like he was planning, or stand and do the right thing even if they don’t deserve it? The film’s final shots are probably the best non-verbal presentation of the sentiment “f**k you!” ever.

A wandering gunfighter (Alan Ladd) takes a job as a farmhand for a simple homesteader who’s being harassed by a cattle baron. He finds himself the target of attention from his host’s wife and his hero-worshipping young son, leading to unspoken but charged tension between the two men. Who’s the real hero of The West? Shane the mythic cowboy, or the hardworking family man – and does it matter?

If nothing else, see it to get that one part of The Negotiator.

If you only seek out one film from this list, make it this one. Often called the greatest of all Westerns, even Wayne often called it his finest film. It’s the ultimate American anti-hero movie – the father of every “bad guy as good guy” story from Dirty Harry to Taxi Driver.

Wayne is Ethan Edwards, an ex-soldier with a dark, likely-criminal past. He’s also a violent racist with a psychotic hate for Indians. When his nieces are abducted by Commanches, Ethan takes up leadership of the hunt. During the years-long search, the posse’s will is tested as the others realize that Ethan is likely to kill the girls to save them from the shame of being “tainted” by Indian captivity rather than rescue them. What will he do? Yes, it’s a movie (partially) about honor killing, and still among the best versions of “what happens when you need a bad guy?”

Jimmy Stewart is Ransom Stoddard, a politician legendary for turning a rough territory in the middle of nowhere into a thriving, well-educated state when as a young lawyer he found himself marooned there after his wagon was ambushed by criminal Liberty Valance (Lee Marvin) – whom Stoddard would earn his greatest fame for killing in a gun duel. Upon returning to town for the funeral of reclusive local “nobody” Tom Doniphon (John Wayne), Stoddard recounts the real story of his life, his friendship with Doniphon, their clash over the love of a girl, and the truth about that fateful duel.

It may seem like a tame star vehicle today, but this is probably John Ford’s darkest Western other than The Searchers. It’s a slow-burn dramatization of a pretty big question: Who really won The West: – men of vision like Stoddard, or men of action like Doniphon? 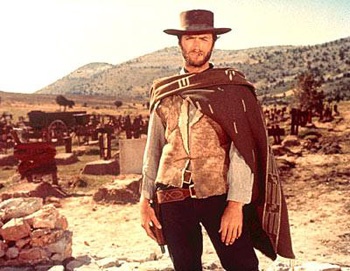 In the 60s and 70s, Italian filmmakers found success making violent, expressionistic versions of American genre films. The so-called “Spaghetti Westerns” were the most successful, and these were the most famous.

Clint Eastwood – then a struggling TV actor who was almost cast as Two-Face on the Adam West Batman – took a paid vacation to make an Italian western about a mysterious Man With No Name for director Sergio Leone. The three films that resulted – A Fistful of Dollars, For A Few Dollars More, and The Good, The Bad & The Ugly made him a superstar. These are the films that most influenced Red Dead‘s look and feel, though hardcore Western fans will argue forever over whether this or The Wild Bunch were the real birth of the Modern Western.

…And then everything changed.

Sam Peckinpah made a lot of Westerns, all of them worth a look, but this is the Big One. Easily the darkest, bleakest and most violent Western ever made at the time, its level of bloodshed is still controversial – it changed all action films, not only Westerns.

The story follows a group of aging outlaws in 1913, who’re looking for one last score as the West they’d known is wiped away by modernity. Eventually, they’re caught between a Mexican gang and a posse of lawmen, and it can only end one way. The climactic shootout is, without exaggeration, the Rosetta Stone of every action movie anyone has made since.

I’m supposed to say that The Outlaw Josey Wales is the better post-Dollars Eastwood Western, but I still like this combination cowboy/horror drama – his first Western as director – better.

A corrupt small town stood by and let their good Sherriff be murdered by bandits, but now the bandits won’t leave. A violent, possibly deranged drifter (Eastwood) offers to take the bandits out, but inflicts brutality and humiliation (up to and including rape) on the townspeople as a sort of payment. As the film goes on, the almost superhuman Stranger turns the region into a literal hell for bandits and complicit townspeople alike – and some of the dead Sherriff’s acquaintances seem to find he looks … familiar.

The later 70s and 80s were the nadir of American Westerns, as the genre was cannibalized by modern variations – mainly cop movies, almost all of which are just modernized cowboy flicks.

But in the mid-90s, there was a brief mini-revival, and this modern classic was part of it. Kurt Russell stars (and purportedly was the film’s real director) as Wyatt Earp in a dramatization of the infamous shootout at the OK Corral, alongside Val Kilmer as Doc Holiday. The film has its problems – most of them caused by having to compete for resources and release times with Kevin Costner’s Wyatt Earp movie, but when it works it works.

Clint Eastwood returns to his roots for what some consider a funeral for the Hollywood Western. He and Morgan Freeman play aging gunslingers hired back into service, only to find themselves on the wrong end of another ex-heavy (Gene Hackman) who’s now a brutal Sherriff. It’s a small, simple story, but one that cuts deep into the ugliest and meanest aspects the genre itself.

Three Million Copies or No Sequel for Medal of Honor