I normally play games to avoid the things that make real life miserable: divorces, failed interviews, even fathers killing your D&D characters. Joining a clan then was the farthest thing from my mind when I started playing Battlefield 1942.

It was while playing that game that I became known as “the Allies’ meanest jeep chauffeur.” I would launch my vehicle and whatever schlub was unfortunate to be riding shotgun into tanks on the shores of Wake Island. Jim used to call jeeps used in this manner “land torpedoes” and the unfortunate occupants “indicators of success.” If someone on your team didn’t die, you couldn’t be sure how successful your land torpedo assault had been.

Terry, a guy from work (and sometimes indicator of success), joined us right when the Secret Weapons of World War II pack was released but the game was already past its prime, and as cool as shooting Nazi’s from a jetpack sounds, it really wasn’t. Cool, that is.

But Battlefield Vietnam brought back Terry along with Scott and Lee to the battle. They joined Jim and I in camping Viet Cong spawnpoints with the horribly imbalanced M60. Our game nights at Jim’s house were not planned out at first, but as the beer flowed into Jim’s parent’s basement, so did the new recruits.

By the time Battlefield 2 was released, our group of friends had become rather enamored with the idea of becoming a proper clan. I could have cared less; I was going through a rough patch with my wife who had gone mental after discovering that I had been secretly gaming behind her back. But I agreed to let Jim play clan organizer under the condition that I got to choose the Clan name and I could borrow his Dreamcast. Jet Grind Radio was pretty fun.

Jim’s first order as leader of the CoCKS clan [The full meaning of the acronym cannot be published here due to internet decency laws. -ed.] was to proclaim himself General Jimmy_James_Esq.

The first thing he did as the king of our clan was organize a match against the ~-=YRK=-~ clan whose server we often played on. p00nm4st3r accepted the our request for a friendly scrim. We were greeted by their clan leader spamming, “Hi faggot.” That sure didn’t bode well for the “friendly” part of “friendly scrim.”

CoCKS clan started as the US Marines on everyone’s favorite map, Karkand. Jimmy took his squad to the left and was ambushed by a squad of dolphin-diving grenade-spammers. My squad provided a largely ineffectual distraction on the hill overlooking the right side of the first spawn point.

Our distraction amounted to being hammered by snipers and artillery. We were losing tickets and something had to be done. I turned to Jimmy, “I am going to try to get past these fuckers in a Humvee.”

Jim was really into it, “Negative, that’s a negative. Continue to provide diversion on hill 214!”

I ignored Jim’s order and ordered my squad into the Humvee. As I pulled out of the filling station I heard Jim shout “What the hell are you doing, man!?” Picking up speed I launched the vehicle over the hill, landing right between the out of bounds zone and a wall. We drove to the end of the wall where I let my troops out to take the second spawn point. 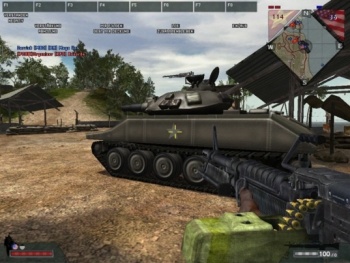 I heard Jim’s angry swears from the other room. He wasn’t having a good time but I ignored him anyway and drove to the next spawn point unchallenged. The rest of the team was closing in on the marketplace – I needed to take this flag quickly if I was going to have any chance to push them back past the bridge.

That’s when I noticed the enemy commander, p00nm4st3r93, chose that place to spawn. He was calling in artillery strikes on my squad, who was fighting a desperate battle at the first spawn point. I pulled out my knife.

“UR HACKING,” came his witty retort in triplicate. Whatever- I’d captured the flag and I wasn’t about to waste that advantage typing back at him. My team started spawning on the flag and moving across the bridge. Even Jim had ceased his dramatics as he sensed the end was near.

The armor gathered on the bridge and began raining fiery death upon the other team. I took my squad across the river on the right to get behind enemy lines. They moved into the warehouse to capture it while I stayed behind to provide a spawnpoint and cover their rear.

While I was standing there, an APC rolled up. As the vehicle fired on my squad’s position in the warehouse I planted my remaining stick of C4 to its butt and ran for cover. The C4 went off and rewarded me with:

“WTF!” Poon said over chat. “How the fcuk do you kill an APC with a fucking grenade.” I continued to Ignore him.

“Your hacking!” he repeated.

I could no longer resist temptation, I found a nice box to go prone behind.

“Like hell. You just suck.” I should have stopped typing there, I didn’t. “Maybe you should go back to playing dressup with your sister.”

No response. I shrugged, stood up and continued to push to the last objective. Then I was dropped to the server selection screen.

“You have been banned from this server. (Reason: Hacking)”

I got up and walked to the other room where Jim was still playing. “Dude, this is bullshit.”

“Dude, I don’t want to talk to you right now.” I hadn’t expected that, did he really believe I was hacking or had I pissed him off by playing Rambo?

This was ridiculous, “What the hell man, I wasn’t f-ing hacking.”

“Poonmaster says you were and he says he has a Punkbuster screenshot to prove it.”

I was shocked. I couldn’t believe that little twerp had convinced my friend that I was a hacker. Perhaps Jim was still mad at me for leaving him to die on the hillside.

Frustrated, I returned to the room I was renting from Jim’s parents, smoked an entire pack of cigarettes and contemplated my revenge. A while later Jim came into my room and told me that the Clan had voted me out and changed the clan name to Elite Shadow Assassins [ESA].

I think if I hadn’t been going through a divorce at the same time I would have let it go. I was stressed out about my failing marriage and now my friend didn’t even trust me. My feelings turned from depression into anger. Revenge would be mine. 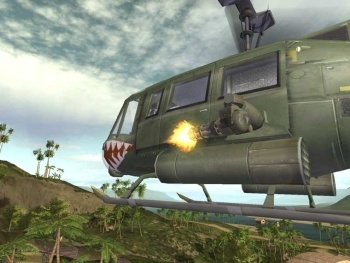 I made it my mission to track down Poonmaster and teach him a lesson. Surprisingly it wasn’t that hard to do. His clan was attending the XLAN 5 LAN party in Chicago. It would be easy enough to find him while I was there and punch his zit-pocked face.

I planned my attack out, including exactly what I would say before exacting my sweet, sweet revenge. I tried some badass lines from movies, and eventually decided on, “That’s what you get when you fuck a stranger in the ass” which made a lot more sense than my second choice: “You know the handcuffs? I picked them.”

XLAN wasn’t what I’d call big, but there was still difficulty finding my quarry, mostly due to the fact that I was more than a little embarrassed to ask people, “Hey, you know, just wondering, do you know a guy named Poonmaster?”

Eventually I found a group of kids playing Counterstrike who knew who I was looking for. They pointed me in the direction of a group of teenagers who were trading Magic: the Gathering cards. I was close to taking my revenge on the little turd but I began to feel nervous. I walked closer to the group and listened.

“Cockatrice is a super rare card,” said one of the taller boys.

“Yeah, but I’ve given you two Demonic Hoards and a Wrath of God already,” said another boy.

They looked up at me as I approached their table. “Are one of you Poonmaster?” I asked hesitantly. The fat kid in the Iron Maiden t-shirt looked up at me in fear, almost as if he sensed my purpose for being there. Perhaps he thought he was in trouble, what other reason would an adult have to talk to him?

Was this the person that caused me so much grief, a boy barely past puberty? He was overweight and his scalp already showed the tell-tale signs of premature balding. His hands were covered in orange Cheeto cheese and he was drinking a liter bottle of coke. Half of me wanted to kick the Magic cards all over the ground and scream like a madman, while the other half wanted to ask him for a fist full of Cheetos and a swig of coke. His diet, his Iron Maiden T-shirt – he could have easily been me from ten years ago. My desire to break his nose was strangely diminished.

“Nothing.” I said, then realizing how odd it I must have appeared, I added, “I played BF2 with you a couple times.”

“Wait, you played on our server?” he seemed less scared and more interested now that he knew I wasn’t some sort of authority figure.

“What’s your name?” he asked while his friends looked impressed that someone over 20 was talking to Poon.

“Captain Picard” I lied. Before he could reply, I said “Picard out,” and hightailed it for a piece of real estate overlooking the Counterstrike matches.

I sat drinking from a flask that was quickly becoming my only true friend. I argued with myself that I didn’t need to get revenge – I was better than that. Soon I was arguing with Mr. Flask. He claimed that my mission had changed; maybe I was here to teach this miscreant a lesson about how to treat other people. He’d have to learn someday or he’d do it to someone else.

Now I am not saying that later that evening I drunkenly confronted a 13-year-old while he was unlocking his bike in the parking lot. Or that he called me some names that resulted in him being punched in the face. And I most certainly didn’t steal his bike and bag of Cheetos before riding like a lunatic into the night screaming, “CoCKS Clan for life!” Of course, I’d never do anything like that – what sort of game journalist would do that?

Batman Comic Sells for Over a Million Bucks