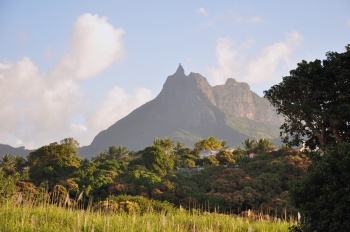 The ancient microcontinent of Mauritia may lie between Madagascar and India.

A study by geologists at the University of Oslo has uncovered that the ancient microcontinent of Mauritia is likely drowned beneath the Indian Ocean between Madagascar and India. Mauritia would have existed between 2,000 and 85 million years ago. Grain-by-grain analysis of sand on the beaches of Mauritius, in the Indian ocean, revealed zircons – tiny crystals of zirconium silicate that are resistant to erosion. The zircons would have crystallized some 660 million years ago. The geologists propose that volcanic eruptions on the bottom of the sea brought shards of the ancient continent to Earth’s surface, which eroded in the sea and washed up on the more geologically recent island. The only other possible source of zircons would be Madagascar, across the ocean from Mauritius, where there’s an outcrop of continental crust.

So where, then, did the continent go? Areas of crust under the Indian Ocean are three to five times thicker than the average thickness of Earth’s crust. Those areas of thickness may be the remains of the landmass Mauritia, which would have split from Madagascar and subsequently sank due to stretching and thinning of crust. It’s likely that Mauritia would have been an island about three times as big as Crete.