Popular culture and nostalgia go hand in flea-bitten hand, since the memories of the things that made us happy are a big part of our individual identities. It’s an interesting and observably true rule of thumb that the popular culture of any particular time is always heavily nostalgic for the period roughly twenty or thirty years previously. So Happy Days, first broadcast in the 70’s, was set in the 50’s. Life On Mars in the 2000s calls back to the mid-1970s. And of course Mad Men, also from the 2000s, is set in the 60s, because it’s nostalgic for the 80’s, which were in turn nostalgic for the 60’s. That’s a case of what we call the ‘double tagback.’

The reason for all this is fairly easy to discern: the generation that creates and funds popular culture, generally people in their 30s and 40s, would have been in their early to mid teens twenty or thirty years ago. That wonderful carefree time when responsibilities were few and life wasn’t so bloody complicated and difficult. Just old enough to start being able to appreciate the culture you’re exposed to, but not old enough to by cynical, or to have many other things to compare it to.

Videogames are no exception to this phenomenon. In fact, since videogames in their modern form are still less than twenty or thirty years old, one could argue that video games are in a constant state of nostalgia for their entire history. Certainly that seems to be what Nintendo tends to bank on. But in accordance with the twenty-year-rule there’s a trend going on at present for games from the early to mid 90s, hence the recent remakes of X-COM (1994), Syndicate (1993) and indeed Rise of the Triad (1994), all from pretty much twenty years ago on the nose.

What I’ve always disliked about remakes is that the tendency is to remake things that were good. And that’s logical and illogical at the same time; logical because the good things have the good brand recognition and are the easier sell, illogical because there’s no point in taking a second crack at something that was fine the first time. Videogames have an advantage here because games from 20 years ago look massively worse than games today, while films etc. have had no equivalent technological upgrade. I’d still argue that the quality of the original 1993 Syndicate overshadows the fairly shitty 2012 Syndicate.

But Rise of the Triad? That’s genuinely a really good pick for a remake, because the original was kinda shit, too. It was a sort of anomaly between single-level 3D like Wolfenstein and the more advanced 2.5D style of Doom and Duke Nukem 3D. Lacking actual multi-level environments, Rise of the Triad tried to fake it through the use of sprite-based floating platforms. Which by itself might have made it adorable, but it was also a little obnoxiously in-jokey and had trouble settling on a tone. Gory Nazi soldier death side by side with adorable doggie transformations, etc.

So yeah, fair enough, remake that shit. And while I’ve got you, I’ve got a few other suggestions for some less well-known games from the early to mid 90’s that weren’t terrible but weren’t amazing and could benefit from taking another swing at it. 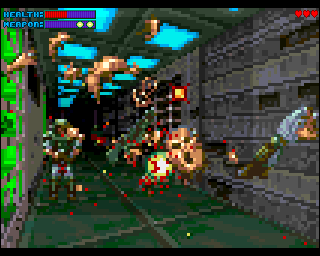 Perhaps a little outside of our early-to-mid 90s designation (it was released in 1997), I still group Blood in that sort of era as it was a later-period 2.5D FPS. A game about an undead cowboy seeking revenge on a Lovecraftian cult in 19th century America, Blood managed to pull off a pretty consistent atmosphere, being both unnerving and darkly humorous with a suitably redoubtable lead character. It was still filling out the standard Duke Nukem 3D-inspired 2.5D shooter checklist of ultra-violence and pop culture references, but that didn’t get in the way too much. Not then, anyway. It certainly did in the terrible full 3D sequel, Blood 2: The Chosen, which decided it was more interested in being some kind of violent, futuristic Simpsons episode. Give it a full-on modern-day remake and dial the gloom back up a bit, ‘cos if the modern age of gaming is big on anything, it’s gloom. Speaking of which:

What do you get when you combine a growing trend for first person shooters with a computer that’s entirely unsuited to the purpose? You get Gloom, the Commodore Amiga’s rather courageous attempt at a Doom knock-off. The resolution would’ve embarrassed a postage stamp, the levels were smaller than the average inner city apartment, and your gun only fired orange basketballs, but it had a certain try-hard charm. There was something about the way enemies exploded into slow-moving bloodless body parts that felt rather festive. And all the soldiers looked like Rob Liefeld characters stuck in hard vacuum.

It may not surprise you to learn at this point that I owned an Amiga CD32 in the early-to-mid 90s, and Diggers was a game often bundled with it. It was kind of overshadowed at the time because its small characters and side-on digging gameplay looked a bit Lemmings-y (and since we’re already nostalgia tripping, what the hell happened to Lemmings?) but Diggers wasn’t a puzzle game; it was a management-y mining game in which you dig down and look for precious minerals. There really is nothing new under the sun, is there? Although considering how Minecraft clones are now some kind of desperate indie gaming get-rich-quick cottage industry, remaking a game that did it in the 90’s might give you the edge you need.

Speaking of nothing new under the sun, did you really think that Papers, Please was the first ever game to simulate the bureaucracy surrounding incredibly fucked up situations? Floor 13 was an interesting little duckie. You’re the head of a secret department within the British government with carte blanche to tail, interrogate and disappear people before they do something to embarrass the ruling party. All summarized in emotionless reports and text menus across your office desk. Like Papers, Please – a sort of “banality of evil” simulator. Floor 13 should be remade, and specifically, it should be remade for the Wii U. You view the reports and make all the decisions through the gamepad, and on the TV screen will be images of your prisoners getting beaten and tortured for information. Occasionally they will plead directly to you for mercy. But all you can do is ignore them. And lick your thumb and forefinger as you turn to the next report.