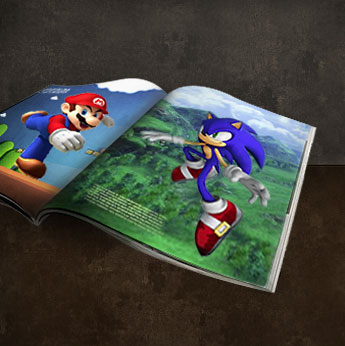 Before the internet, the battlefields of the console war were playgrounds and cafeterias, and the bullets were made of advertising dollars.

The modern console war is synonymous with “angry, crazy shouting on the internet,” but back in the eighties and nineties it was comprised of thousands of small, unconnected skirmishes all across the world. What’s more, the people providing the ammunition for these battles were platform holders and developers, who liked nothing better than taking pot shots at each other in print and TV ads. In Issue 292 of The Escapist, Tim Latshaw looks back at some of the stand out moments in nearly two decades worth of sniping and one-upmanship.

An effective videogame ad would stock supporters with powerful talking points while turning anyone who dared to argue into an envy-addled ball of chump rage. One of the greatest examples – and one that still haunts me to this day – is SquareSoft’s print ad for Final Fantasy VII.

It was 1997. The Nintendo 64 finally came out late the previous year and, for the fanboy I was back then, there was much reason to rejoice. Then one day I thumbed through a friend’s magazine on the way to school and the monster reared its head. Dominating a two page spread, beautifully rendered before a cloudy purple sky, was the Mako Cannon. That would be the “Sister Ray” to any of you fans who prefer it, but back then the only thing I knew to call it was a massively big-ass gun; an obvious image of power and a Freudian field day in the making. And above the cannon, discretely written, was:

“Someone please get the guys who make cartridge games a cigarette and blindfold.”

I seethed in my bus seat. Square had only recently jumped ship with the Big N for Sony and here they were rubbing salt in the wound, flaunting how awesome it was to use compact discs like some … computer. They even threw a snotty little factoid into the corner: “If it were available on cartridge, it’d retail for $1,200.” I had no idea how they figured that out, but dreaded the fact I was going to hear it parroted from every new PlayStation fanboy in the halls.

Trash talking ads have largely gone the way of the dodo – with the occasional exception – but it’s interesting, and fun, to look back and see how people used to do it. You can read more about it Latshaw’s article, “Ad Wars.”

PlayStation Plus Subscriptions Actually Catching On