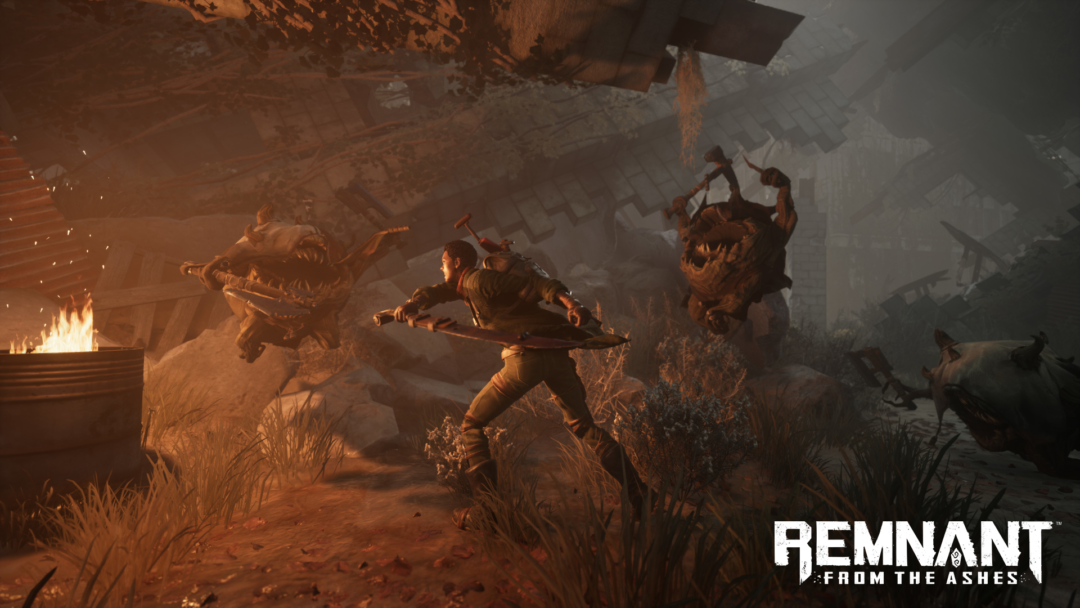 As I was wandering through Rohm, an irradiated wasteland inspired by Dune and Mad Max that serves as one of the main biomes in Gunfire Games’ Remnant: From the Ashes, writer and designer Dylan Snyder pointed out a burly figure wearing a loincloth and tusked skull mask with giant bones strapped to his arms. “That’s a Berzerker,” he said. “You do not want to get hit by them. They are not friendly.”

That seemed pretty obvious. Not much living in the world of Remnant is friendly. Set in an alternate future where an alien race called the Root invaded Earth in the 1960s, effectively wiping out human civilization and stalling technological progress, the game is packed with more than 140 unique enemies who vary based on setting, plus more than 20 bosses each with their own look and abilities.

“There are enemy types that visually you can tell were derived from a similar starting point but will have a unique attack and unique evade options,” Snyder said. “Very few feel like copy pastes of the others.”

Whether playing solo or in online co-op with up to two others, you’ll be trying to rebuild by fighting the Root and other monstrous forces they’ve left in their wake both on Earth and other worlds like Rohm. But what those worlds look like and the challenges you’ll face there will be different for every player.

“When you start up a campaign and make a new character, we generate your world from there and it will be completely different every time you do that,” Snyder said. “That changes everything you encounter, including the order.”

I started my demo by choosing between three archetypes: the tanky Scrapper, damage-focused Hunter, and the Ex-Cultist, who supports the team with healing powers. Each is meant to just provide an initial build rather than lock you into a path, and there’s even an item you can use if you decide you want to entirely change your play style and respec all of your traits. I went with Scrapper, meaning my starting gear included heavy armor and a giant mace that swings slowly but hits hard.

All players begin in Ward 13, an underground bunker serving as a last refuge for humanity. It houses NPCs that sell gear and crafting materials and upgrade what you already have. Each has their own story and will respond to what you’ve been doing in the world, providing better loot as the game goes on. When you’re ready to leave the safety of home, you place your hands on a glowing red waypoint crystal and teleport to the surface. That crystal is one of the nods to the fact that Remnant shares the same universe as Gunfire’s 2016 RPG Chronos. You’ll also spot some similarities in items and in the jungle world of Pan. 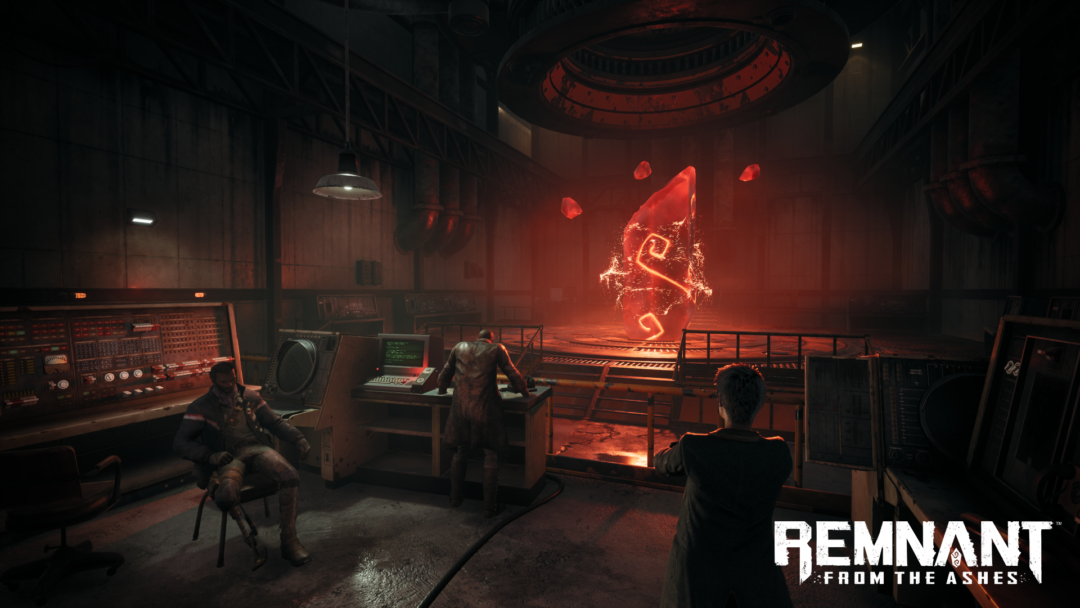 “I think Chronos as a universe excited us so much that we weren’t done with it,” Snyder said. “There’s a lot to explore.”

Venturing to the surface, I found a devastated city entangled by sinister red roots and crawling with the Broken, the Root’s main infantry, which have the same color palette. I also encountered Wraiths, which look similar but have the ability to teleport, forcing me to stop firing and figure out where they’d gone before they pelted me with their own ranged attacks.

Wraiths also cause wounds that bleed, dealing damage over time that’s exacerbated if you run or fight. The effect can only be stopped by waiting the effect out or bandaging yourself. The game has plenty of these nasty debuffs like Root Rot, a disease that can cause you to cough, interrupting whatever action you were taking, and radiation, an effect unique to Rohm that halves your health. Snyder said these survival elements are meant to encourage players to prepare themselves before venturing out on a mission or be stuck scrounging for supplies in the field.

The controls are simple and intuitive, making it easy to aim and switch between your weapons. Running and dodging cost stamina, but it refreshes quickly and some builds can make the recovery even faster. You have plenty of ammo, though you can find more by killing enemies and looting crates or by resting at one of the waypoints, which also restore your health. You can otherwise fully heal by using one of your three Dragon Hearts, which are also how you resurrect fallen allies in multiplayer. If you run out of them, you’ll have to resurrect at a waypoint. 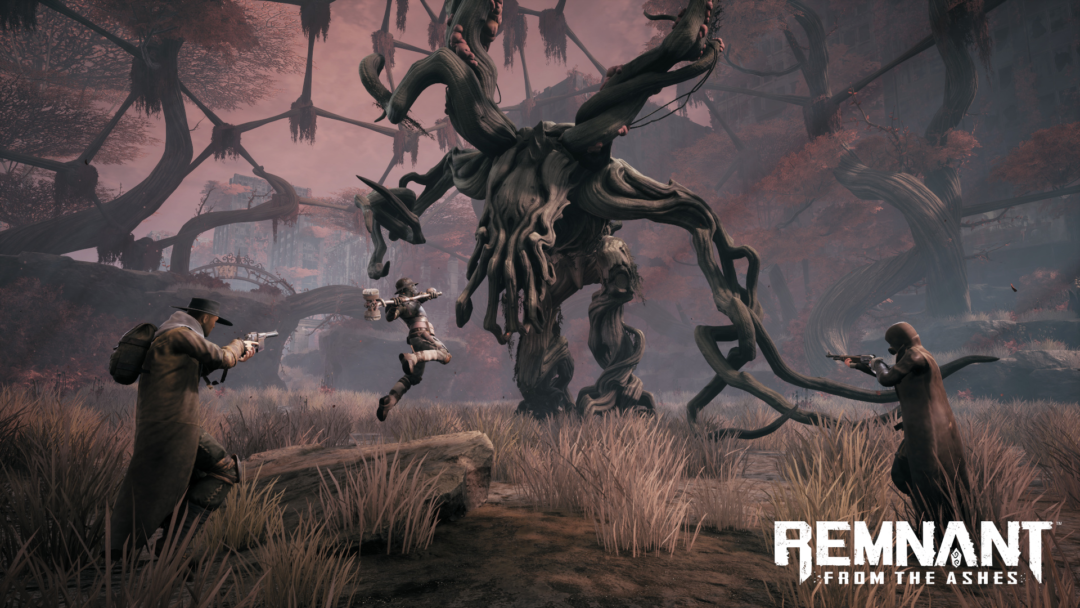 After getting my bearings solo, it was time to team up and head to Rohm. I switched over to a higher-level build with upgraded weapons and a full set of Scrapper armor. As you acquire gear you’ll have to decide whether an individually powerful item is worth breaking up a set bonus. Snyder wouldn’t say how many weapons Remnant: From the Ashes has — just that it’s a lot, and they’re trying to make everything useful and cool throughout the game rather than pushing players to grind until they can start acquiring big endgame loot.

“The biggest difference between us and your typical looter shooter is that all the loot you find is important,” Snyder said. “If you find a new weapon, it’s not just a random roll of the shotgun you already have but maybe it’s got two more attack than your last one. It’s going to be a completely new weapon that you can add a mod to that’s unique to it.”

Mods change the look of the weapon and add a special ability that can be used after you’ve fired it a certain number of times. Gathered through quests and defeating certain monsters, the majority of the mods provide abilities found on Remnant enemies like shielding from attacks or the ability to summon a Root creature that will draw fire.

Co-op mode is very user-friendly. Everyone gets any gear that drops, and you can see silhouettes of your allies even through walls, making it much easier to stick together. Friendly fire exists, though you’ll hit for less damage than you would an enemy. I was complaining that one of my allies was shooting my Root minion when one of those Berzerkers barreled down at me. I opened fire, but it shrugged off the shots from my Chicago Typewriter machine gun and killed me in a few blows. Snyder warned that the enemies get even harder as the game progresses, not only gaining more health but also more sophisticated maneuvers. 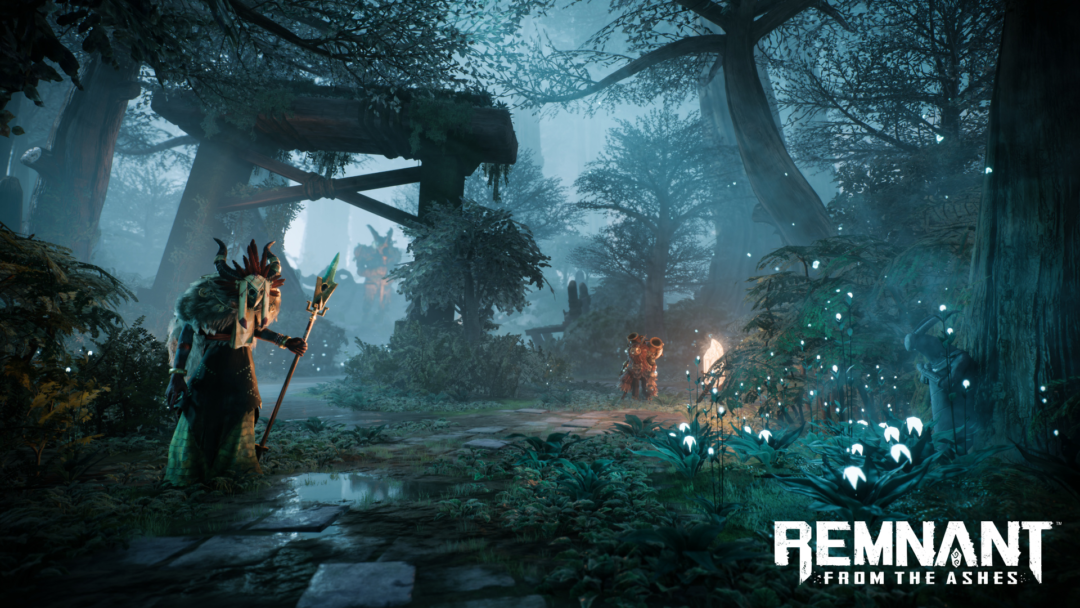 “You will very rarely feel comfortable with the game,” he said. “Right when you think you’ve got it, we’ll throw a curveball at you. It’s going to be tough.”

After getting back on our feet, our party ventured into one of the procedurally generated dungeons, which are not tied to the plot but do have a higher chance of dropping rare loot and materials. They also house random mini-bosses with their own loot tables. We faced Raze, a floating glowing rock that could only be seriously damaged when he opened his mouth to unleash sonic attacks. Between assaults, he’d hide in a pool of green poison and summon floating skulls. Around halfway through the fight, the skulls got pointy and started rushing at us and exploding. The battle was intense, testing all the skills we’d developed so far. It was a real rush to watch him tumble down defeated.

The procedural aspects of Remnant: From the Ashes mean every playthrough is different, but Snyder estimates it will take 15-20 hours to get through the game’s main story. There are sidequests and lore that can be uncovered once the main story is completed, and Gunfire plans to release an Adventure Mode soon after launch that will allow players to generate new versions of the random worlds that they can explore without dealing with the gates created by the plot. Snyder couldn’t provide any more details on post-launch support during our interview.

“We have ideas,” he said. “We’ve obviously talked about it. That’s just what games are now. We love the foundation, we love the world, but we are focused right now on getting the game shipped.”

Remnant: From the Ashes releases Aug. 20 on PC, Xbox One, and PlayStation 4.