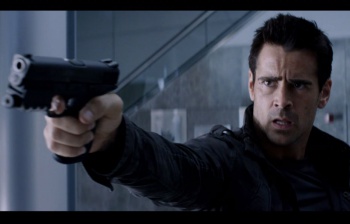 Actor Taylor Kitsch is also said to be in the running for the younger lead role, with the second season said to be focusing on three lead characters.

In HBO’s first season for True Detective, the show heavily relied on A-list actors Woody Harrelson and Matthew MccConaughey to carry the show along with series creator Nic Pizzolatto’s fantastic script work. Now, it seems the anthology’s second season will bring in another name with the same weight. According to multiple sources, it’s been said that Colin Farrell (Total Recall, Saving Mr. Banks) is set to star in the lead “older” role. Not only that, but also rumored to be joining Farrell is Taylor Kitsch (Battleship, John Carter of Mars), who’s said to be taking on the younger lead role. Sources have said that True Detective’s second season will include three lead roles (two men and one woman), with Jessica Chastain (Zero Dark Thirty) once reported to have been the top choice for the female lead.

These same insiders have said that HBO was intent on landing a true “movie star” and was aiming for someone who could play “rugged and gritty” — which, they’ve said to have found in Farrell, who’s also going to the second season’s “primary focus.”

True Detective season one did not only manage an average gross audience of 11 million viewers — the most for a new series for the network since the Six Feet Under — but also garnered multiple Emmy awards, including lead actor nominations for both McConaughey and Harrelson.

HBO has declined to comment on the rumors but did state that the full cast will be announced soon at this week’s TCA presentation. With president of programming Michael Lombardo saying, “”I think the people we will cast will be well-known names, but that wasn’t our ambition (in season 1).”

As someone who highly enjoyed True Detective’s debut run, I’m perfectly fine with Farrell being the main actor. Let’s just hope the script is up to par and maybe get in a few more action scenes while they’re at it. Which actors do you want to star in season two? And what would you want Pizzolatto do differently for the upcoming season?