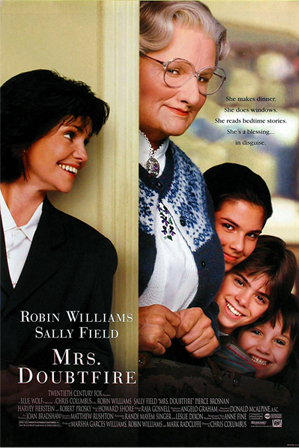 According to The Hollywood Reporter, legendary comedian Robin Williams will revive one of his most iconic movie characters in a sequel to the 1993 comedy Mrs. Doubtfire. Original helmer Chris Columbus is also being sought to direct from a new screenplay by Elf writer David Berenbaum.

The original film was one of the biggest comedy hits of the early 90s. Williams played a divorced father banned from seeing his three children by his ex-wife (Sally Field) for his irresponsible and immature antics (summary of charges: Acting like Robin Williams.) In order to see them, he dons a costume and prosthetic makeup to pose as the children’s new nanny, an elderly Scottish woman named Euphegenia Doubtfire. Child star Mara Wilson, comedian Harvey Fierstein and then-future James Bond Pierce Brosnan also starred.

At this time, there is no word on what the story of the sequel would be.