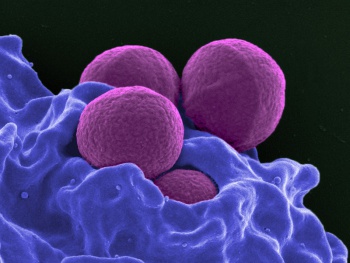 Scientists at Northeastern University in Boston were conducting experiments with soil bacteria, and may have discovered the next great antibiotic in the process.

If you pay attention to health issues, you may have read that we’re facing a big problem with antibiotics. Specifically, the more we use them, the more resistant bacteria becomes, until the antibiotic isn’t really helpful anymore. And considering that something we take for granted, like penicillin, saves countless lives each year, losing our ability to offer antibiotics could become a huge problem. Thankfully, scientists are working to resolve the issue, and may have a potent new antibiotic to keep germs at bay. And of course, like many great achievements in science, the discovery was the side effect of working on something else entirely.

It all started when a team from Northeastern University in Boston conducted attempted to grow bacteria in the lab that had never been grown before. “The majority of bacteria on this planet are ‘uncultured,’ meaning they don’t grow on our petri dishes,” Northeastern’s Kim Lewis explained. “And when I’m talking about ‘the majority,’ it is 99 percent.” To achieve this, the researchers built an apparatus that holds bacteria-rich soil between two membranes, where the bacteria can grow before being retrieved and carried into the lab.

This is already all well and good for any researcher specializing in bacteria, but then Lewis started looking for compounds that could act as an antibiotic. They found two dozen, one of which could a be a great contender for a future penicillin. It’s called teixobactin, and not only does it cure mice of skin, thigh, and lung infections, it does so without any recorded resistance.

In human speak? Teixobactin is something diseases can’t fight against so far. “This for all practical purposes may be a largely resistance-free compound,” Lewis confirmed.

We can’t say goodbye to superbugs just yet, as teixobactin needs to be tested in humans before it can be used as a treatment. But even if that doesn’t pan out, it seems there are all kinds of otherwise inaccessible bacteria Lewis has could draw upon that make the difference. All because some researchers decided to see what new kinds of bacteria were in the soil. Not bad, science. Not bad.