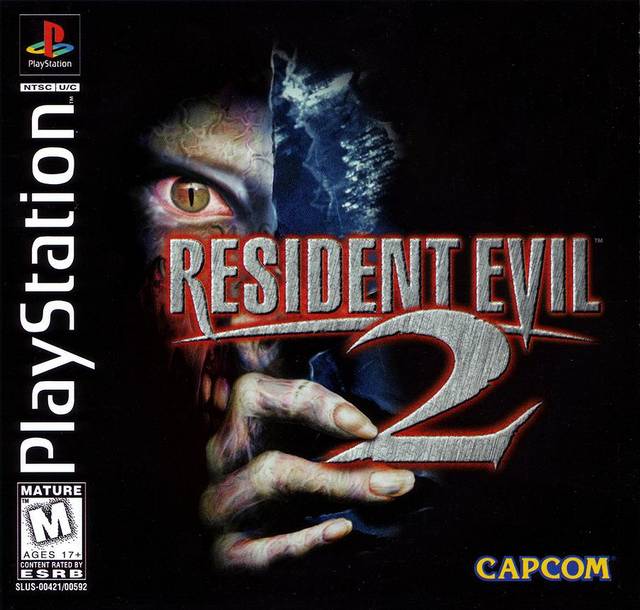 No question and hands down. Resident Evil 2 is the greatest thing to ever come out of Capcom’s famous zombie franchise. Scary on multiple levels, it combines a chilling atmosphere with a solid story and tense action to create an unforgettable horror experience.

Note: While I first played this on N64, the version I played for this review was the PS1 original.

Resident Evil 2 was probably one of the biggest surprises I’ve ever had as a gamer. When I first bought it, I was a huge Nintendo fan and an eager warrior for the Nintendo 64 in its late-90s battle against the (clearly inferior) Sony PlayStation. One of the biggest talking points the PlayStation crowd had back then was the fact that its console could do full-motion videos while the N64’s cartridges generally couldn’t muster the storage space for them. So when an N64 port of Resident Evil 2 was announced complete with all of the game’s FMVs, I jumped on it like it was a never-ending cup of milk with a built in Oreo dispenser. It was an act of console loyalty that inadvertently led me to what would become one of my favorite games of all time.

Resident Evil 2 was like nothing I’d played before. Most every other game I’d experienced prior to that had put me in the shoes of someone exceptional. I was always a secret agent or some warrior of destiny pre-ordained to take down some world threatening baddie. Resident Evil 2, comparatively, drops you into the shoes of characters who are clearly out of their depth. They weren’t walking forces of nature defeating the evils of the world and righting wrongs. They were flesh and blood human beings holding onto their lives by the skin of their teeth. It was an idea that I fell in love with almost immediately and, even today, I have an especial affinity for titles that pull off that feeling of being an insignificant speck in a larger, lethal world.

Revisiting Resident Evil 2, in turn, is probably one of the biggest joys I’ve had since this column first began. Is it quite the game that impressed me so wholly back in 1999? No. There are elements of it that time hasn’t been especially kind to. That being said, it still holds up incredibly well and, even after fifteen years, had the power to raise the hairs on the back of my neck and leave my heart racing.

Taking place in the fictional American town of Raccoon City, the game opens in the aftermath of a zombie outbreak fomented by the nefarious Umbrella Corporation. Stumbling into this mess are rookie police officer Leon Kennedy and Claire Redfield both of whom arrive in town on the same night and briefly meet before being separated. The game follows their efforts to discover what happened to the city and find a way to escape it before they too join the ranks of the shuffling dead. All in all, it’s a decent (if simple) story that’s well written and paced almost perfectly. You’ll rarely go more than half an hour without the plot advancing at least a little bit and the script mercifully avoids delivering any “master of unlocking” moments of dialogue.

As solid as its story is, however, Resident Evil 2‘s real achievement has more to do with its ambiance than its narrative. This is easily one of the creepiest games you’re ever going to play. The environments, the camera angles, the sound, the music; they all work together to create this wonderful aura of nearly constant tension. My favorite section of the game, for instance, is the police station at the game’s beginning. The whole building is littered with the remains of failed defenses and attempts to push back the invading zombies. It then couples this already disturbing imagery with these slow, ominous bits of soundtrack that never fail to give me chills. 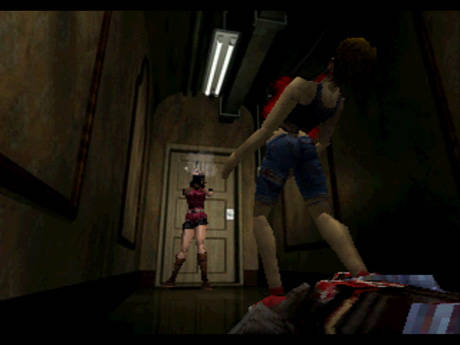 The entire game is, likewise, put together with these oppressive fixed camera angles that work wonders to imbue every setting with the visual flair of a horror film. It should be mentioned, of course, that a lot of people hated these camera angles and, if we’re being fair, I can understand why. When you’re fighting zombies you want to be able to see what’s going on. The cameras in Resident Evil 2 often get in the way of the player seeing everything around them.

My problem with this criticism is that obscuring your view is kind of the point. Fear doesn’t come from being able to see everything that’s around you. And while the camera in Resident Evil 2 can sometimes be inconvenient, it also does a lot to increase the feelings of claustrophobia and suspense. Turning a corner in Resident Evil 4 is no big deal. You have an over-the-shoulder camera and can peek around to make sure the coast is clear. In Resident Evil 2, however, you often have no way of knowing exactly what’s waiting for you. And while that might bother some, I’d argue that it adds much more to the game than it takes away.

Moreover, the game actually takes some underappreciated steps to keep its use of fixed cameras scary but beatable. While the Resident Evil franchise overall is infamous for its use of surprises and jump scares, I can’t remember a single instance in Resident Evil 2 where it felt like things had been built to be unfair. Even when the camera is clearly meant to be working against you, there’s usually still a way to detect enemies before you see them. The audio, for instance, does a fantastic job of giving you clues as to when you’re not alone. The moans and shuffles of zombies, the audible footsteps of zombie dogs, the hissing of lickers; there’s usually some sort of cue to let you know that something’s nearby.

There are other things I could praise as well. The game’s use of puzzles is probably the least obtrusive that I’ve ever seen in a game. And just for context, outside of Zelda I usually hate puzzles. Resident Evil 2‘s never bothered me, though. They’re not overbearingly difficult, they usually don’t require too much backtracking and, while most are silly when you think about them logically, they still manage to feel like a fairly natural extension of the game world. 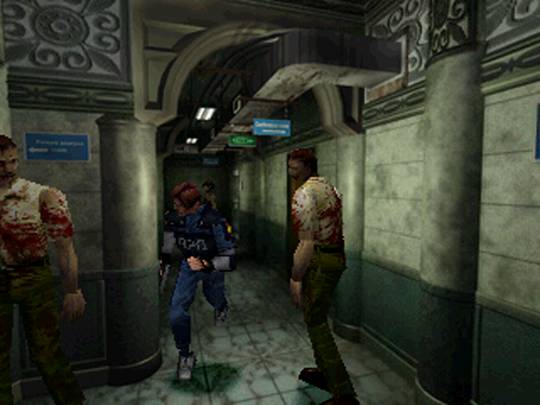 Resident Evil 2 also features some of the best replay value you’ll find in a linear single player game. It does this primarily by letting you play as either Claire or Leon, both of whom run through roughly the same areas (with some minor divergences) and many of the same events, but still have separate and largely unique storylines. Better yet, the game also includes two “B” scenarios that allow you to play through what the other character was doing while you were traipsing about in the main campaigns. And let me just say that the B Scenarios are better than the main game. They’re more interesting, they reveal more about the story, and best of all, they play host to the franchise’s scariest monster: Mr. X. (We’ll talk more about him next week.)

For all that Resident Evil 2 does right though, it does have some substantial flaws. As much as I might disagree with some of the criticisms levied against its camera, I would wholeheartedly concur that its controls are incredibly dated and restrictively stiff. In fact, every single time I died in the playthrough for this review, it was because the controls screwed me over. The problems come when you try to turn around or shift your aim on the fly. Simply put, you can’t. It just takes too long and the situations where you’ll actually need to do it (i.e. zombies coming at you from multiple directions) are generally the sort where time isn’t in abundant supply. All in all, it doesn’t ruin things, but it definitely adds some frustration that can detract from the game’s otherwise expert mood.

Even with that substantial flaw however, Resident Evil 2 is still one of the quintessential classics of horror gaming. If you’ve ever wondered why old (27 year old) fogies like me complain about the direction the series has taken in recent years, all you need to do is play this game to understand. It’s a masterpiece of survival horror, built from the ground up to you leave you shaking in your proverbial boots. If you’re looking for something scary to play this Halloween, don’t waste your time with newfangled flops like The Evil Within. Spend it more wisely with a trip down memory lane.

Next week I’ll be exploring Resident Evil 2 a bit further by looking at the monster Mr. X and discussing why he’s both the scariest thing the series has ever done as well as a perfect example of how linear games can be sometimes be more effective than their non-linear siblings.

I should also let you know that, beginning in November, Good Old Reviews will be returning to the multi-author format that it followed before I took it over full-time. I enjoy this column and the writing experiences it has allowed me, but certain shifts in my work at The Escapist are demanding more of my time, making this a bit harder to keep up with alone. I hope everyone will welcome Marshall Lemon and Marla Desat as the newest regular members of the Good Old Reviews crew!

Constantine Is Faithful To The Comics, But To A Fault