Last week I heaped on the doom and gloom and talked about how hard it is for a small company (like a game development house) to prevail in court against a larger opponent (like a publisher) when the big company is simply interested in dragging out the case in order to drive the little guy broke. I left some people with the impression that the bad guys always win and there’s nothing anyone can do to stop it. This is actually not at all the case. There is a way that small companies can protect themselves, and it doesn’t even require an overhaul to our legal system. If you’re worried that your little development studio might get crushed under the heel of (say) Activision, then there are some pretty easy things you can do to make it almost impossible for them to come after you.

How these cases work is that a large company will enter a business relationship with a small company. Maybe they’re paying your studio to make a game. Or port an existing game to another platform. To make a spinoff to an existing franchise. Or maybe they’re just buying your company outright. In any case, people don’t just pay tens of millions of dollars without making sure everyone is very clear on what they’ll be getting in return. The two companies will, over the course of some months, hammer out a gigantic contract that details what work is expected and when it should be done. This protects the big company from having the little guy take their money, blow it on pizza and party hats, and turn in a Peggle clone at the end of the development cycle. Which is a shame because that would be a pretty sweet job.

But this contract also cuts the other way. If the big company decides they want to alter the deal, Vader-style, then they can just drag your little company into court and claim you failed to meet one of the hundreds of line items on the contract.

“You failed to turn in a viable demo by E3 as agreed.”

“Ah, that was just gameplay footage. And we wanted the PS3 demo.”

“We’re developing native Xbox 360 and porting it later. We can’t suddenly produce a PS3 port right in the middle of the project!”

“So you admit you entered into this agreement knowing you wouldn’t be able to meet the agreed-on timetable?”

A real case wouldn’t be nearly as simplistic as my example above. But the important thing to take away from it is that this kind of he said / she said stuff is very hard for an outsider to sort out, even if the truth is clear to the parties involved. Any argument that requires a judge or jury to understand how programming or art production pipelines work is going to be time consuming to make, and in a court case time is money. And the little player has a lot less of that.

Last week I warned you that there was no easy solution to the problem of big companies suing little ones, but some people just couldn’t help themselves. So let’s go over some of the responses.

Moral of the story: Don’t live in the US.

Sadly, there is no country in the world where the little guys are somehow magically safe. Every country has its own eccentricities, and what works in the U.S. might not work elsewhere, but every system has holes because every system has human beings in it.

Some genius who got himself banned said:

Well, a simple fix would be to place a soft cap on what corporations can spend in legal fees to sue other corporations. Say, ASSHOLE inc. can’t spend more than 25% of VICTIM llc.’s net worth in legal fees.

Tracking this is quite difficult. Big firms employ salaried lawyers. They’re paying their lawyers 24/7 whether they’re working on a particular case or not. It would be very hard (and more importantly, expensive) to prove those lawyers were or were not working on any particular case and not just playing FarmVille. 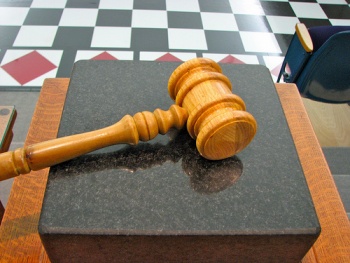 Why not just make massive fines for companies who are obviously suing on a case that would never win. Or better yet, if the little guy fights and wins, the losing company has to pay all their legal fees.

The second point is called loser pays and is a popular idea. (Le_Lisra can feel smug that most western countries use this system outside of the U.S.) I don’t know enough to comment on it beyond that.

But taking the first point: Who would decide if someone was “obviously suing on a case that would never win”? To make that kind of determination, you’d need a judge. And a jury. And lawyers so that both sides could make their case…

I am reminded of a very wise saying:

“Explanations exist; they have existed for all time; there is always a well-known solution to every human problem – neat, plausible, and wrong.” – H. L. Mencken

Thankfully, we don’t need to muck about with the court system or change any laws to fix this. The solution to this problem is easily explained and costs nothing to implement. Several people pointed it out in the comments last week. The solution is this:

“Don’t go into business with people who have dealt poorly with their other business partners.”

I can’t imagine what would possess anyone to sign a deal with Activision, knowing what is publicly known about the company now. Even if the deal seems nice and the Activision people seem friendly and Bobby Kotick has your company over for a barbecue and shakes hands with your team and you meet his cute kids. When you are signing a contract with someone far out of your financial weight class, the paper is only as reliable as the character of the guy who hands you the pen.

I don’t know Bobby Kotick personally. I don’t know the particulars of any of the cases that Activsion had against former Infinity Ward employees, current Infinity Ward employees, No Doubt, Double Fine, Genius Products, Greg Hastings, or any of the other cases we didn’t hear about because they never went public. I can’t say for certain that Activision is the bad guy. Maybe they’re just a victim of extraordinarily bad luck and worse PR.

But a lot of former Activision business partners are very unhappy with how they were treated. As the president of a development studio, I know I wouldn’t bet on his word with the jobs of all my friends and everything we’ve built. Activision is like a guy who has had his last five spouses die under “mysterious circumstances”. Maybe he’s a murderer and maybe he’s just had bad luck, but at this point only an idiot would marry him and find out.

Gamers are angry that there’s no way to punish Activision. But this is the punishment that Activision should have to endure: Smart and talented people should simply refuse to do business with them out of fear of finding themselves in Greg Hasting’s shoes.

Character matters. Don’t do business with people you can’t trust. This advice will never change, no matter what business you’re in.

Shamus Young is the guy behind Twenty Sided, DM of the Rings, and Stolen Pixels, Shamus Plays, and Spoiler Warning. He’s never run any business ever and you should probably not rely on him for business advice. Use your head.

Making Games Is Less Fun Than Playing Them