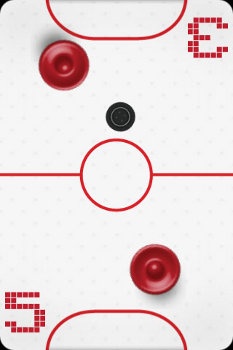 I can’t remember a single time I’ve ventured into an arcade or bowling alley and not played a round or two of air hockey. Placing the quarters into the slot is almost like an offering, as if coins could appease the Air Hockey Gods. There’s something inexpressibly satisfying when the first wooshes of air blast through those tiny holes; the puck and mallets floating aimlessly in a sea of white plastic, and the clack when puck and mallet connect. Surely, no iPhone game could recreate these perfectly corporeal experiences.

I tested Arcade Hockey, an air hockey app by Brainjuice, with a friend at a pizza place, while awaiting the delivery of a gigantic, greasy pie. We played the best out of 15, each of us determined to claim a handheld victory. The controls are simple: Use your finger to move your mallet across the screen. If you’ve played a game of air hockey (who am I kidding, of course you have!), you know the rest of the rules: The game begins with the puck in the middle of the course, keep said puck away from your goal while trying to score on the other person’s goal. Simple, yet satisfying.

Of course, nothing can properly recreate the feeling of holding a mallet in your hand and whacking the puck towards your opponent with as much force as you can muster, but Arcade Hockey comes pretty darn close. The app responds to the force of your finger, so if you gingerly tap the puck with your mallet, it will idle slowly across the field. If you hit it with oomph, however, it will zoom across the screen towards your opponent’s goal. The puck is constantly moving and you must be ever vigilant in defending your goal, else it should sneak its way inside, however, because Arcade Hockey is played on a smaller screen, it’s a bit harder to follow the puck around. When air hockey takes on a miniaturized form, where quick reflexes are even more important – you only have a split second before the puck comes zooming towards your goal, and instead of sending it far, far away from you, it only goes so far. A smaller field equals more intense gameplay, and as my friend and I played we became more and more animated, our fingers sometimes hitting one another’s in an attempt to hit the puck first. When you do manage to make a goal, the familiar thwock as the puck is swallowed and sent down the chute issues from the phone, and it’s quite a satisfying sound. The screams of an amped-up, adoring crowd help, too.

You can play against a friend, or a computer; the computer is especially adept at guarding its goal and lambasting yours with quick volleys. You can tone down the difficulty, thankfully. You can also change the size of the puck and mallets, making it easier to guard a goal and spot the puck. Being a touch-screen, fingers can get in the way of visibility, but making the puck larger alleviates that somewhat.

Unfortunately, I’m just as bad at iPhone air hockey as I am at real life air hockey. My friend beat me 13 to 2. I still had a blast.

Recommendation: Buy it, it’s only .99 – cheaper than what an actual game of air hockey costs.

Bottom Line: Arcade Hockey is quick, uncomplicated fun. It’s an easy way to waste some time while you’re waiting for something more important to do. It doesn’t require any explanation, just grab a friend with a finger to spare and start playing.

Lauren Admire is really no good at air hockey. Or any sports at all, really.