“The legend of the Lost Gold of Juarez has been passed from one generation to the next since the time of Hernando Cortez. … According to the legend … all who seek it will find only insanity and perdition. This avaricious madness has come to be known as the Call of Juarez.” – The Call of Juarez 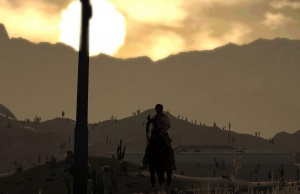 A successful Wild West videogame is a lot like the Lost Gold of Juarez; all who seek it find only madness, perdition and failure. Witness the lackluster spectacles of Gun, Red Dead Revolver and Dead man’s Hand, to go back only a few years. Going back even further, we’ll find all manner of failed cowboy games, up to and including Nintendo’s Wild Gunman, a Zapper game that saw both home and arcade incarnations and reduced the Wild West to a handful of shootouts with scrubby-faced varmints in black hats.

Considering guns (and shooting) play a central role in most cowboy fiction, one would assume the FPS genre would fit the Wild West like a well-worn boot, but to date the genre has produced little of note. In fact, it’s quite possible the best cowboy FPS was a little-noticed gem from LucasArts called Outlaws released in the late ’90s which, with its sprite-based, cel-shaded graphics, was handily overshadowed by the pioneers in the 3-D revolution.

And yet, the Wild West mythology is as American as they come, and developers chasing after success west of the Mississippi need waste no time explaining who cowboys are, why they carry guns and what the difference is between a rancher and a farmer, a townsperson and a bandit, a hero and a villain – we already know. Generations of pulp fiction, popcorn films and even games have cemented the western imagery in our minds, and although the names change, the stories remain the same. Or do they?

Although boilerplate cowboy stories are a dime a dozen, the best of them subvert the dusty misconceptions that you could tell the good guys from the bad guys by the color of their hats. The best stories remember that even the best of guys had a little bad in them, and the hats weren’t always so black and white, but rather, different shades of gray. In the real Wild West, there was no law but what men made for themselves, and most times good or bad didn’t matter as much as who was holding the gun.

The first washed out bridge most Wild West games run afoul of is forgetting this fact. White and black hats may be easier to render, but they do not a compelling story make. But not all games require a compelling story to steal 20 or so hours of your time; some of the best are thinly-veiled excuses to get you to shoot a variety of baddies for hours on end. This would seem to be a formula ready-made for the Wild West, but strangely, even cold hearted shmups set in the Wild West look like ghost towns in comparison to their space junkie and zombie shooter cousins. Mainly due to a lack of complexity and, not to put too fine a point on it, evolution. 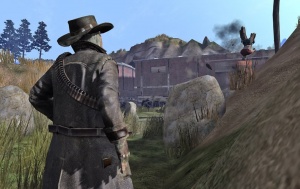 Part of the fun of the shmup is having a variety of highly-destructive weaponry from which to choose when blasting your foes into space or back to the grave. The genre convention is to allow around 10 such weapons, one for each of a keyboard’s number keys, but recent games, taking advantage of scrolling menus and console flick buttons, have expanded the list. A typical shmup will offer you an effective but uninteresting weapon to start, enticing you further into the game to get the good ones. In the Wild West you’ve got basically three guns: a pistol, a rifle and a shotgun. There’s dynamite, too, and the occasional Gatling Gun, but that’s about it. If developers want to lure you further into their web with the promise of better weaponry, they start you off with a knife, or worse – no weapon at all.

If the success or failure of a Wild West game can therefore be so easily dissected into story- and weapon-based traps, Ubisoft’s Call of Juarez is a break-even proposition, deftly side-stepping the character chasm while falling face first into the gun gorge.

Call of Juarez puts the player into the twin roles of Billy, a half-Mexican kid falsely accused of killing his kin, and Reverend Ray, Billy’s uncle and gunman turned God man, who takes up the gun once again to hunt down and kill his nephew for falling afoul of the law; both God’s and man’s. It’s an interesting juxtaposition, both in terms of gameplay and story, and one which, after ripening for a few levels, is quite impressive.

Story-wise, the two characters breathe new life into stale Western archetypes, highlighting each character’s good and bad sides and allowing the player to effortlessly switch between the two. Billy, the innocent on the run, has to do whatever he can to survive to prove his innocence, even lie, steal and kill, if necessary. Ray, on the other hand, has set himself up as the hand of God, punishing the unrighteous – with lead. In most instances, the figures he puts to the gun deserve it, but one has to wonder if Reverend Ray is really the right man to decide who lives and who dies, especially in light of his false pursuit of his nephew Billy, a kid whose only crime was being in the wrong place at the wrong time.

The two characters also offer unique play mechanics, mixing up the gameplay just enough to keep what could be another tired Western shooter interesting. Billy, the wiry but weak fugitive, has to sneak, steal and jump his way through various dusty landscapes, creeping into houses and barns to liberate his means of escape and defense. Ray, on the other hand, is a walking tank, killing what can’t be swayed by other means and washing away his enemies in a river of blood. The mechanics of each are well-handled, and swinging across ravines with Billy’s whip is just as exciting as shooting your way through a dusty Western town behind Ray’s twin revolvers (or rifle, or shotgun). 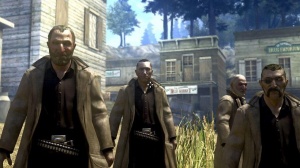 Where the game falls flat is in lack of variety, and the aforementioned weapon trap. This is less of an issue with Reverend Ray, who begins the game with a pair of stylish shooters, but Billy, in the role of main plot character, gets the shaft. His early missions involve having to find both a weapon and ammunition all the while running from superiorly-armed foes and hiding under bushes, lest he get kilt. It’s a fun mechanic, but out of place in a Western. Billy’s unique abilities are put to good use in later missions, but the first hour of Call of Juarez, like most Wild West games, will undoubtedly have you clawing out your eyes in frustration. Particularly when the mission maps fail to load, the game freezes up or scripted events miss their cues and you spend your precious spare time wandering around the game’s beautifully-rendered maps, wondering what to do next.

As an on-rails shooter with an interesting twist, Call of Juarez succeeds handily. (Although one wonders why Ubi went to the trouble of rendering such a beautifully-immersive world only to limit you to 40 acres and mule.) The characters and story present enough of a diversion to make you forget it’s been done before – and better – and the shootouts are damn fun. And Billy’s missions, while a bit of a departure, break up the monotony just enough to keep it interesting. Expect any more from this shooter than a few hours of light-hearted fun, however, and you’ll be flirting with insanity.

Transgaming to Bring EA Titles to the Mac