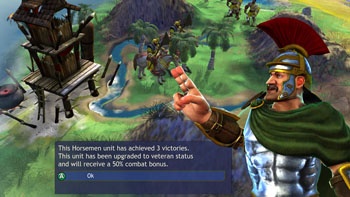 Civilization Revolution comes from a long, distinguished line of turn-based strategy games with the goal of leading your race into the annals of history through conquest, diplomacy, or sheer economic or technological might. Thankfully, you don’t have to do so much as lift a spade or cut a ribbon to ascend to your throne as the Greatest Ruler of All Time. Being a leader is already hard work, real hard. No, to do the job right, you need to delegate.

Which is why I’ve deferred to my advisors on the most pressing question of my afternoon: Is Civilization Revolution worth playing? Let’s start out with my technological advisor. Your thoughts, poindexter?

Ahem. Right. The first thing you’ll likely notice about Revolution is the delightfully loquacious cast of characters. Alongside 16 playable historical figures (which Firaxis terms “Civs”), you’re joined by four aides who will periodically offer helpful updates on what to research, what to build and what your competitors are up to. They gesticulate wildly, interrupt each other and speak entirely in gibberish. There’s no option to subtly encourage their resignation, either (“for personal reasons,” of course); you can mute them, but you’ll still have to endure your tech advisor’s tongue-tied excitement at having re-discovered pottery for the 20th time.

Shiny new avatars aren’t the only new additions to Revolution. There a bevy of new bonuses granted from reaching economic milestones or being the first to discover new technologies. The former helps speed up the pace in the early stages of a campaign, while the latter offers greater incentives for players who wish to research their way to victory. They’re not exactly game-changing, but-

See, here’s where it starts to break down. Like the dispositions of competing Civs – which range from “cheerfully oblivious” to “extremely pissed off” with nothing in between – Revolution sacrifices the franchise’s trademark complexity for the sake of keeping core gameplay concepts communicable through visuals alone. In many cases, that means omitting any information that doesn’t fit in a speech bubble above a Civ’s head.

Pretty much every game system from Civ IV has been “streamlined,” with varying results. The City interface has received perhaps the most drastic revision: It’s no longer possible for citizens to become angry or sick, merely “uncivilized” (putting in stark relief the disastrous societal consequences of eating your entree with your salad fork). Likewise, you can no longer designate citizens as artists, merchants or scientists; instead, you simply choose from a list of production schemes and let the game take care of the rest. 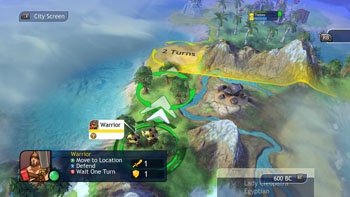 Most notably absent is Civ IV‘s Worker unit, which was critical to your success in the early stages of a campaign. Both Workers and the special resources they could acquire are gone in Revolution in favor of territory that provides flat bonuses to production, growth or trade. This makes the decision of where to build additional cities seem a bit trivial by comparison. And for a game as visually captivating as Revolution, the inability to construct farms, towns and other landscape-altering features makes your empire feel a bit empty. Half the fun of previous Civs was spreading outward from your capital, subjugating your environment and carving it up into something useful – but then I probably played Civ IV more like a competitive version of SimCity than I did a traditional 4X game.

OK, this I can actually get behind. There’s one area of Revolution that Firaxis has almost universally improved over previous Civs: the combat. In the past, units felt like walking spreadsheets with animations tacked on as a concession to non-purists. In Revolution, battles are actually fun and engaging to watch, as units scurry around each other waiting for the proper moment to strike. If the scales tip in your opponent’s favor, you can even order a retreat and salvage the unit for later use. You’re also able to combine three of the same type of unit into an army, allowing you to overrun some weaker units without firing a shot.

Unfortunately, the new console control scheme hampers warmongering a bit. Just selecting your troops can be a chore – next to the simplicity of right- and left-clicking, using the D-pad to toggle between troops feels prehistoric. Furthermore, changing a unit’s course before it reaches its destination takes two turns in Revolution, adding another unnecessary roadblock to what should be a standard maneuver. It’s one thing to substitute button presses for keystrokes; it’s another entirely to emulate the precision and ease of use of a mouse with thumbsticks and shoulder bumpers.

But while the controls are less intuitive than in previous Civs, the combat bonuses in Revolution actually make sense. In Civ IV, it’s virtually impossible to capture an enemy city without bombarding it first, vastly inflating the need for siege units and stretching simple snatch-and-grab operations into dozen-turn affairs. Blissfully, Revolution is mostly “what you see is what you get” when it comes to armed conflict, especially since veteran promotions now change the appearance of the unit itself. Select the “infiltration” ability, and your veteran unit earns a 50-percent bonus to city attacks, along with the totally sweet prefix of “ninja.” Any game that lets you command a Ninja Panzer Tank Army can be forgiven for a few of its inadequacies.

Bottom Line: The changes Firaxis have made to the Civilization formula are embodied in the Civs themselves: They’re simple, cute and mostly incomprehensible.

Recommendation: If you’re a Civ novice, Revolution may be right up your alley. For veterans, you’ll likely want to stick with Civ IV.

If Jordan Deam had his way, he’d commute to work in a Ninja Panzer Tank. Unfortunately, he’ll have to settle for his Subaru.