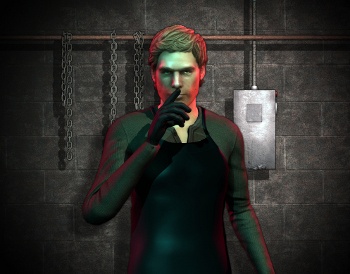 Pumped up with 3D graphics and ambitious production values, Dexter: The Game is not only a loyal treatment of the Showtime television series, it’s a good indicator of iPhone gaming’s potential.

Too bad it’s not a great game. In addition to its short play time of three to four hours, there’s a sense of disconnect between Dexter: The Game’s best attributes – Michael C. Hall’s pitch-perfect voice acting, the faithful recreation of show settings and a variety of play styles – and the lack of polish on the game as a whole.

When I first heard about Dexter: The Game earlier this year, I knew it had potential to be better than most TV-based games, simply because Dexter is unlike most TV shows. The eponymous main character is a serial killer, yet he’s also a good guy. His late father, once a police officer, recognized Dexter’s murderous impulses early in life, and taught the boy only to kill other murderers.

This “Code of Harry,” which above all tells Dexter not to get caught, helps him navigate his day job as a Miami Police Department blood spatter analyst and his personal life as a brother and a boyfriend. When he can, Dexter slips away into the night, succumbing to his dark urges, tossing his victims into the ocean and collecting their blood in a set of laboratory slides. He’s a methodical killer by night, and a savvy imposter by day.

The game plays on this balance with two status meters, called “The Mask” and “The Dark Passenger.” The former meter, expressed as a white bar running across the top of the screen, represents Dexter’s outward appearance. Pleasant conversations and completion of work tasks boost Dexter’s mask, but they accelerate the growth of the other meter, expressed as a black strip that slowly turns bloody red. Dexter can satiate the Dark Passenger by acting a little creepier towards other people, but murder is the only true release. As you solve the game’s main story line, which follows a portion of the show’s first season, you’re free to satisfy Dexter’s urges by pursuing a couple side projects.

The neat thing about Dexter: The Game is how it puts the player through rigors that are assumed in the television show. While Dexter the TV character had no problem picking locks, sneaking around and connecting the dots on cold cases, you’ll have to do all that leg work yourself in the game. It’s a little jarring to see Dexter fail – he’s immaculate in the show – but it’s a necessity in a game that includes trial and error.

Dexter: The Game’s stealth sequences remind me of the Playstation era’s sneaking craze – inspired by Metal Gear Solid, but undercooked. You’re basically just moving towards a target while trying to stay out of sight. During some broad daylight recon, I had fun avoiding suspicion by hovering over a mailbox and pretending to pick pennies up off the ground, but for the most part these segments were a chore. The iPhone’s dodgy controls – based on two virtual thumb sticks but not as responsive as, say, Wolfenstein 3D – didn’t help.

When it’s kill time, you choose a weapon and get a chance to speak with the enemy before killing him. Getting a confession fully satisfies the Code and better relieves the Dark Passenger, but either way you’ll eventually go to a black screen where you perform touch gestures to complete the kill. Blood-curdling screams accompany your first few incisions, but they eventually give way to the sound of hacked flesh and the sight of spattering blood.

I actually found Dexter’s daytime struggles to be more exciting. In conversation, Dexter gets three dialog choices, ranging from most to least detrimental to his mask and having the opposite effect on his Dark Passenger. Due to the superb cast and the near-perfect preservation of the show’s edgy tone – more dark humor would’ve nailed it – the dialog is a blast no matter how Dexter behaves.

More exciting are Dexter’s confrontations with Sgt. Doakes, a tough guy and the only one in the department that suspects something is amiss with Dexter. Navigating these conversations requires you to tilt the iPhone left and right, keeping a sliding marker within a certain range during rounds of verbal abuse.

To boost Dexter’s mask, there are a few mini-games to play, such as recreating blood spatter with touch gestures and a Simon-like memory game. They’re not great fun, but they help ensure a smooth ride through the game, which ends abruptly if Dexter’s mask meter runs out.

But here’s the problem: Dexter: The Game only covers a fraction of the show’s first season, and it isn’t long enough to get immersed. If you mix up Dexter’s dialogue, play a few mini-games and execute your kills, the game is a breeze, and it’s so limited in scope that you’ll miss some of the intrigue and subtexts that make the TV show a cult classic. I worry that people who play this episode will get the wrong impression about the television show – that it’s just a crude murder simulator – and as a result will be turned off to Dexter entirely.

The game is also a little buggy. At one point, I had to start the entire game over because the next step in the main quest disappeared, and I was also able to clip through walls and floors during a certain scene.

All these gripes result in a game that’s underwhelming, but promising. I’d certainly pay $15 for an entire season, even with the Dexter: The Game’s existing problems, but a $6 episode seems steep for an idea that’s just warming up.

Bottom Line: As a game, it’s hard to recommend Dexter: The Game in good faith, but as a stab at deeper iPhone gaming and good quality fan service, it’s a start.

Recommendation: See if the price comes down once all the episodes are out, or hope for a package deal.

Jared Newman usually satisfies his Dark Passenger on the iPhone with a few rounds of Wolfenstein 3D. No creepy, blood-blotted laboratory slides required.