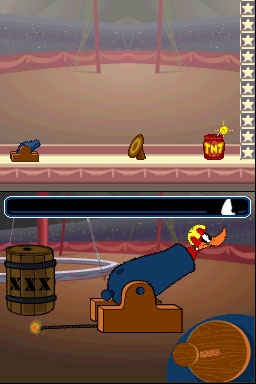 I’m still trying to piece together what just happened. I received Duck Amuck in the mail from The Escapist Central today. Instead of my usual pre-sleep Puzzle Quest, I decide to embark on my newfound role as reviewer. I insert the game into my DS. As I type this, 45 minutes later, I’m watching the credits roll.

Seriously. Let’s break this down. In the first 10 minutes I am completely puzzled as what I’m supposed to do. A well-animated Daffy Duck greets me on the DS’ bottom screen, surrounded by white nothingness. He berates me for a while. I glance over at the game manual. Should I consult it? The back of the box offers this clue: Make him mad. So I poke him some. He responds, as all cartoon ducks will, with bringing me cans of paint. OK, Daffy, I know your game. Dragging one of the three paint cans to Daffy starts the game proper.

It begins with a mini-game, and it consists of me, a 32-year-old man, blowing frantically into the DS microphone to keep a floating Daffy aloft. At the end of an obstacle-ridden course is the Sheriff of Nottingham holding a bag of gold. I sail right past him. Fail. Again. Fail. Eventually I discern that I must actually hit him with Daffy, as opposed to everything else in the mini-game, which I must avoid. Success!

Another game has me lobbing bombs at a skiing Daffy. By the time the fifth level rolls around, it’s merely luck that allows me to hit Daffy as he zooms by.

Each time I beat a mini-game, a thermometer fills up a little more. I play through eight of the mini-games, and suddenly Daffy’s thermometer hits the top. I am then treated with an ending, and the credits roll. That’s it.

The game I removed from my DS, Puzzle Quest, has been in there for well over a month, still unbeaten, daring me to just play it for another round. Duck Amuck lasted 1/30 of the time.

But after the incredibly short campaign, what else is there? More mindless mini-games? Yes there are. According to the menu (which you access by throwing Daffy off the screen) there are 22 mini-games, none of which were very challenging or interesting.

As uninspiring as Duck Amuck is, it’s not all bad. The non-traditional menu was a bold choice, and once you understand how it works, it’s a fun take on navigation. And really, most of the interesting stuff is in the way you get to the mini-games, not play them. Closing the DS while Daffy is standing there, for instance, starts one. Another (probably the most fun one) begins with you slicing Daffy in half. The voice acting and animation are well done, and reverential to the source material, Charles Jones’ and Michael Maltese’s “Duck Amuck.” The whole Wario-esque act of figuring out what the hell is going on in a mini-game holds some limited charm, though I’m not sure it that mechanic was intentional.

But I can’t tell you to buy the game. I’ve been playing my share of games for longer than some of you whippersnappers have been sucking oxygen, and I don’t know if I’ve ever watched credits roll this quick. It’s not as if I’m some sort of mini-game guru, either – even failing the mini-games raises Daffy’s temperature.

I’ll admit, I’m not the target market for this game, despite the fact I’m a fan of the original cartoon. An 8-year-old with a short attention span might enjoy the game – maybe.

Bottom line: Warner Bros. certainly tried something new with the new menu, but that’s about the only interesting , it accurately portrays the character. The deal breaker for me is the stupidity and repetition of the mini-games. Every one of them wears out its welcome.

Recommendation: Rent it, buy it used, but save your money.