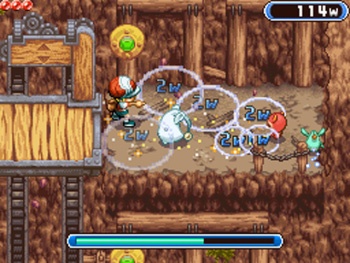 There are some days when tossing furniture in all directions, tossing the contents of your closet across the living room floor and rampaging around the house seems dangerously appealing. But rather than actually trashing your abode in a bout of berserk spring cleaning, the quasi-psychokinetic powers of the capture gun in Elebits let you flick the Wii remote around like a baton of annihilation – quelling urges for wreaking real-world mayhem in the process. While Konami’s Pokémon-ified DS sequel doesn’t quite offer the same level of cathartic destruction, it packs an addictive punch in other ways.

In the original Wii game, a young, attention-starved boy named Kai gets fed up with his parents after they neglect him to obsessively pursue their research on Elebits – tiny energy-producing creatures that act as the world’s main power source. Kai decides to go on an Elebit-collecting spree to exact his revenge on the little critters, but winds up making nice with an Omega Elebit named Zero by the time the credits roll. Elebits: The Adventures of Kai and Zero on the DS picks up shortly thereafter, but it offers a handy recap for players who missed out on the first game. The story is more developed this time around, and a few not-so-subtle eco-friendly messages even creep into the game. The duo’s new adventure kicks off when they stumble upon an anthropomorphic, time-traveling bus built by Kai’s dad. While horsing around, they accidentally power the thing up and warp into another world: big whoops. Trapped in a strange dimension with no roadmap, Kai and Zero must explore the land to collect enough power, resources and Omega Elebits to warp off to the next locale in hopes of finding their way back home.

Though there are no households to upend in search of the elusive Elebits, you’re still able to give Mother Nature a thorough shakedown. Kai’s capture gun is more subdued; you won’t be lifting cars or buildings into the air, but flinging rocks, shaking trees and grabbing bushes is all par for the course. The game makes great use of touch control, allowing you to effortlessly direct the power of the capture gun with the stylus in interesting ways. While all controls in the game can be handled with the stylus alone, using the D-pad for movement and utilizing the touch screen for other tasks will likely be a more natural fit for most players. 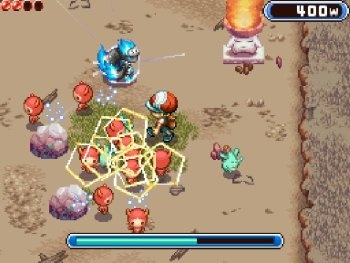 As with the first game, energy is a crucial missing component (hence the need to “harvest” the more mundane varieties of Elebits). Many doors, platforms, switches and abilities require electricity, and a constant meter keeps track of the wattage you have at your disposal. There are many different types of normal Elebits to capture, and each adds a different amount of wattage to your meter. And the act of capturing Elebits is extremely fun and addictive. When you flush Elebits out from their hiding spots, they’ll start running away frantically. Whomping them with the stylus momentarily stuns them and triggers a countdown timer; tapping your Omega Elebit before the timer runs out will cause it to zip around collecting its incapacitated comrades and adding their energy to your pool. You’ll get bonuses for swiping large numbers of the poor critters in one fell swoop.

Many aspects of the The Adventures of Kai and Zero make for a fun and compelling game, but the comparisons to Pokémon are unavoidable – both in its Game Boy Advance-style 2-D graphics and its emphasis on collecting cute creatures with cool powers. The main objective in exploring each world is to locate several new Omega Elebits scattered around the region. Not only will these critters provide enough juice to power the bus and warp to the next realm after you’ve clobbered the area’s boss, they come in handy for overcoming new obstacles introduced in each map.

You can load up a total of five Omega Elebits at one time into an easy-access menu bar, and there are 40 to collect in the game in total (gotta catch ’em all). Rather than going overboard by presenting you with hundreds of these special creatures to seek out and capture, acquiring them is part of the natural progression of the story. They basically function as special items that follow you around like puppies. A quick tap of the stylus will let Kai switch spots with his currently equipped Omega Elebit buddy to trigger their special ability. You can also pump excess watts into your Omega Elebit posse to level them up and strengthen their powers. From burning shrub blockades, digging holes and breaking impassable rocks to revealing invisible platforms and warping back to the bus, the unique abilities of each companion comes into play frequently throughout the game.

The presentation of The Adventures of Kai and Zero may be slightly skewed towards a younger audience, but it’s still a lengthy, challenging and satisfying adventure game. If you can look beyond its Pokémon-like qualities, you’ll find it offers a little something to suit a wide range of tastes.

Bottom Line: Elebits on the DS dials down the visuals and ramps up the gameplay.

Recommendation: Buy it. It’s time to get your capture on.

Nathan Meunier is afraid of what creatures might come out if he shook the stacks of games and rubbish piled around his desk.

NYCC: House of the Dead Overkill Hands On