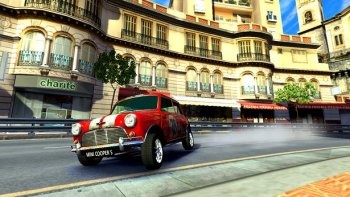 On November 18 of last year, the three most powerful men in Detroit flew to Washington, D.C., to panhandle for a $25 billion emergency loan. But instead of securing that big ol’ cheque, they got barbecued by antagonistic senators. Sitting in that wood-paneled hearing room, did those wounded chief execs find their minds wandering? Fantasizing about somewhere this whole auto business was just … simpler? Floating away to their own happy place, where a soft, caressing Mediterranean sun hangs in an impossibly blue sky, and the only way to make that rapidly approaching left-hand turn down a cramped alley is to reach down and yank on that handbrake with all your might? Pull, doughty CEO, pull!

If so, boy, have I got the game for those guys (and let’s face it, they still need cheering up). GTI Club+: Rally Cote d’Azur is the excessively-named HD update of GTI Club, a Konami arcade racer from 1996 notable for its prominent use of wheel-locking handbrake turns to negotiate an alluring, winding Monte Carlo-esque locale. The game is a PlayStation Network exclusive [Ed Note: Though this was true when this review was written, the game has since been released in the U.S. as well] – and currently only available in Europe, where it costs around $15 – but it’s definitely worth creating that Eurotrash account to gain access to it, especially if, like the Big Three, you’re keen to strip things down and get back to basics.

Taking its cue from The Italian Job (1969), in which Michael Caine choreographed a skidding ballet for three color-coded Mini Coopers as they nimbly escaped a gridlocked Turin, GTI Club+ plonks you in a vaguely free-roaming French Riviera town and urges you, in true arcade style, to drive to the next checkpoint. On the easier difficulty settings, the way forward is fairly obvious. But once you work your way up to Hard, you can pretty much go where you want – skittering through underground car parks, sliding across piazzas and hoofing it down off-road shortcuts – as long as you hit the next checkpoint in time.

Some driving games are all about finding the perfect line and then disciplining yourself to replicate it for every lap, but GTI Club+ is more frantic and improvisatory. There’s obviously a path of least resistance around the course – which you can smoke out in the Free Play mode – but thanks to dawdling civilian traffic, aggressive opponents (either A.I. or human) and an unpredictable railroad crossing, each race is a concentrated, twitchy, addictive experience. 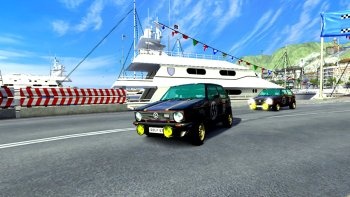 The online multiplayer supports up to eight players, and the ability to honk your horn, flash your lights and aggressively rev your engine in the lobby means even without a headset you can effectively communicate your impatience as others swap out their rides. You select from a garage of boxy 1980s European superminis – like Micro Machines, they come in a collection of five – and while there are apparently minor handling differences between them, it largely seems to be an aesthetic choice. Fans of Sega Rally will welcome the long-snouted Lancia Delta, while the dinky Fiat A112 Arbarth at least gives the illusion of being the most nimble. Judging by some yet-to-be-unlocked trophies, a downloadable pack of contemporary versions of these classics will be released soon.

There’s a car customization mode that initially seems fairly boilerplate – just stamping pre-rendered decals onto your vehicle – but once you discover you can unnaturally stretch the stickers like Silly Putty, it’s possible to come up with some distinctive, eye-popping paint jobs. You can also personalize licence plates to something predictably juvenile. (Mine says BAWBAG.)

If you admire someone else’s customized livery in the lobby, you can replicate their entire look with one button press, which they might view as either a compliment or a taunt (often depending on the outcome of the previous race). And if you’re fed up of racing – or more specifically, losing all the time when you’re racing – there’s also Bomb Tag mode. One player is rigged with explosives, and everyone else scurries away to avoid them. Trading paint hands off the bomb, and when the timer hits zero, kabloomy. It’s JG Ballard’s idea of Kiss-Chase, and it’s awesome.

Developed by U.K.-based Sumo Digital, much praised for their work on Outrun 2, GTI Club+ is graphically unshowy but utterly rock-solid, running in 720p at 60 fps. If it seems like you can “get” the whole thing by glancing at one screenshot, there’s actually a surprising amount to uncover, refine and savor if you start to burrow. It’s also incredibly addictive: The races are so short and intense, how could you not have enough time for just one more go? And it’s hard not to fall for a game where the ultimate unlock is a stuffed dog on wheels that, in lieu of engine sounds, pants uncontrollably as he bolts round the streets.

There are a couple of downers: For such a compact download with only one “course,” there are some bewilderingly long loading times when you fire it up. Also, if the multiplayer falls down when you’re trying to join an online race, it dumps you right back at the title screen. Luckily, the intro music – like the rest of the game – is totally gnarly.

Bottom line: Retro in style but coolly modern in execution, GTI Club+ is a bracing blast of compelling arcade hi-jinx.

Graeme Virtue is a freelance writer based in Scotland. He recently managed to get Aquaman to open up about being excluded from Mortal Kombat Vs DC Universe.