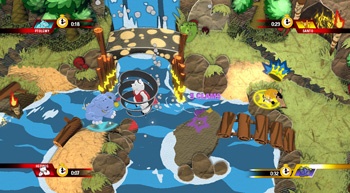 Space Chimps. When I was asked to review Hail to the Chimp I thought I was to review the upcoming movie-based game Space Chimps. How many chimp-based games could be released at roughly the same time-period anyway? Well, two it seems, but that’s beside the point. The point is my erroneous assumption of the chimp-based game I’d be reviewing led to a rarity in our internet-and-information-based culture: Hail to the Chimp was a game I’d neither heard of nor had any expectations towards.

Title notwithstanding, Hail to the Chimp is not a chimp-based game, more of a jungle menagerie-based game. It uses a jungle setting and numerous anthropomorphic characters (among them a hippo pimp, a punky platypus, and a ninjitsu octopus) to stage a satirical stab at a presidential election. The King of Jungle has stepped down, the monarchy is abolished, and the numerous denizens of the jungle are having their first democratic election, which provides the basis for the multitude of mini-games that comprise this party title.

Hail to the Chimp has an interesting framing sequence to each of its mini-games: The “story” of the first democratic jungle election is told through coverage by 24-hour news station GRR (the game contains a lot of puns like this) as well as campaign commercials featuring each of the ten playable characters. There is a lot of content to the game in this respect; if players let the main menu run without starting the game, fake news stories and campaign commercials will continue to run without overlapping. I was able to let it run for about 20 minutes without any repeats.

The downside to this large amount of story content is the fact that a lot of it just isn’t very funny. The satire is very broad and played out; featuring characters being interviewed and very clearly avoiding questions or, to use current “political-speak,” flip-flopping often on issues. A lot of the humor also comes from clichés the writers assume are universally funny, or have been long played out; such as the aforementioned pimps and ninjas. A lot of the skits play at being hip, but aren’t witty or clever enough to pull it off.

The game doesn’t play much better. Story is ancillary to gameplay; Gears of War is a good example of this: tight, clever, classic, and unique gameplay wrapped around a warmed-over, trite story. Hail to the Chimp can’t pull this off.

The single-player game consists of taking control of each of the playable characters in different locations and guiding them through three “primary” events. Players proceed through recounts and other events as well before the last character standing is declared President. Not surprisingly, single-player mode is the weakest aspect of the game. It’s repetitive and boring but to be fair the game is clearly designed with multi-player in mind. 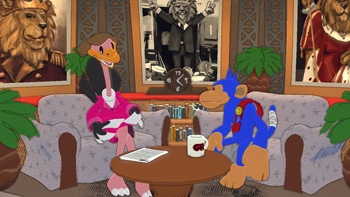 Considering each of the mini-games is not very different at all, the multiplayer aspect begins to fall apart as well, and that is a problem. All of the games have different targets or goals, ranging from stuffing one’s ballot box with votes (represented in the game as anthropomorphic clams); using clams to secure funding from numerous “fat-cats” littering the stage (represented by fat cats dressed in red vests with the requisite pocket watches, top hats and monocles, an image that’s as played out as the humor in the game), or claiming each of four ballot boxes in a stage, which is akin to a base-capturing game.

Every mini-game requires that characters collect any certain number of clams and punch out other players to knock down their number of clams. Regardless of the target or goal of the game, there is no deviation from this. Very little strategy is required beyond avoiding other players and stuffing one’s pockets with as many clams as possible. That’s not to say there is no strategy at all. One of the cooler features in the game is the ability to team up with other players to maximize clam-collecting prowess. Some of the team-ups are rather clever. For example, if bigger characters team-up with smaller characters, they’ll use the latter as a projectile to attack other players, or if one of the two many-armed characters are used, their appendages can be stretched out to perform a running clothesline on other characters.

Teaming up has its downside too; if one player betrays another, the effects can be devastating. Team ups are only one sliver of hope in an otherwise repetitive, unoriginal package.

Bottom Line: Hail to the Chimp fails to be much fun. The amount of content is impressive, and the idea behind the game is intriguing, but none of the concepts are utilized well. The graphics are cute and nicely-animated, but they can’t help the fact that the mini-games are more frustrating than fun and are completely boring after about 15 minutes, no matter how many friends you invite over.

Verdict: It’s a shame the game doesn’t capitalize on a potentially funny concept. Unless you’re hard-up for a party game that is not on a Nintendo peripheral, it’s best to just forget Hail to the Chimp.

Matthew Olcese once wanted to train a diaper-clad monkey to sit on his shoulder, groom him, and attack his enemies. Other than being strong evidence of his insanity, this fact also meant he reads too much Y: The Last Man.