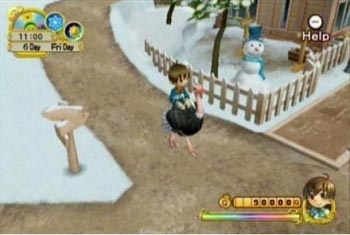 After 10 years of farming and gardening, Harvest Moon still revolves around many of the same core tasks found in almost every single game in the series. Growing crops, raising animals, making friends and building a bustling homestead are all essential to the franchise – fans have come to expect these elements in each new installment. Past additions and minor changes to the formula have mostly been welcome improvements. However, with Harvest Moon: Tree of Tranquility for the Wii, the series shows signs of slowing down.

Your arrival on the economically faltering Waffle Island is good news for the local citizenry. Since the Mother Tree’s health failed long ago, the island’s residents have fallen on hard times. They’ve been unable to turn their luck around – presumably due to their general cluelessness and ho-hum attitude – and consequently put a lot of faith in your abilities to bail them out. After an eager welcome from the mayor and his posse, you’ll pick a piece of land to settle and get straight to work on the twofold task of building your plot into a prosperous farm and bringing about the return of the Mother Tree and Harvest Goddess. It’s a minor variation on the same recycled tale anyone who’s played a Harvest Moon game should already know well.

Tree of Tranquility sports a new visual style that alternates between moments of beauty and instances of pure dullness. Certain areas of the island are particularly pleasing to look at, but so many other areas come off as bland by comparison. The game looks quite different, but it’s not a huge graphical improvement. Frustrating camera angles never let you get a good look at the land in which you’re running around. It’s also a pain that most of the peripheral scenery in the game, such as bushes and tree outcroppings, are completely impassable.

There’s another aspect of Waffle Island that stands out immediately: its size. There’s far more ground to explore here than in past games. This would be a blessing if it weren’t for the introduction of load time transitions between every area on the map. It takes long enough to walk from one area of the island to another, and many of the different shops and locations you’ll frequent are spread far and wide; having to wait another five or more seconds when moving to a new district feels agonizingly slow. Adding insult to injury, an immense amount of time will pass before you can unlock the option to buy a horse, and it takes even longer before you’re able to ride it. 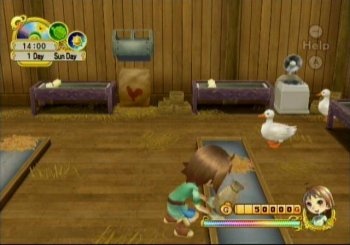 Money is scarce in the beginning of Tree of Tranquility, and items are way overpriced. You’ll have to spend days grinding away at the riverbed and in the garden just to be able to earn enough dough to buy a single frying pan or other useful item. It’s a constant struggle, until you’ve managed to build your farm up enough and get into a good rhythm. Despite your best efforts, you’ll soon find practically everything about Tree of Tranquility moves at a snail’s pace. As with past Harvest Moon games, progression largely depends on what you aim to accomplish. Though days pass and seasons change, you can pour many hours into your farmstead without making much actual headway in the game. Sadly, even when you’re making a concerted effort over a long period of time to move things along, it still seems achievement of the game’s major goals takes forever.

Even with some substantial visual changes and a different land to explore, the underlying gameplay is still very much the same as it has been for quite some time. Growing seasonal crops for shipping is still an engrossing process. You till the soil, sow the seeds, water them daily, watch them grow and harvest them at the appropriate time. Tree of Tranquility lets you plant crops in long rows, which is a nice change from the 6×6 squares of past games. Without an aiming box, you’ll find yourself watering the wrong plants from time to time, but it’s less of an issue than it has been in the past. Tacked on (and thankfully optional) motion controls involve the same single rote maneuver, regardless of what task you’re performing or what tool you’re using. It’s a little too easy to trigger the actions inadvertently, accidentally chopping at a poor animal or mowing down an important crop in the process.

Other endeavors like mining, raising and caring for animals, courting a mate (you can play as either a male or female character from the start), making friends with villagers and expanding your home are all too familiar. There are some fresh nuances incorporated into some of these activities, but they’re so minor I hesitate to spoil the few meager surprises in store for players.

Tree of Tranquility has its high points, but it’s far from the strongest entry in the series. Many of the game’s shortcomings can easily be overlooked by players who are giving the franchise a try for the first time. However, those who’ve faithfully stuck with the farming sim over the years will find this latest entry offers more of the same. There’s simply not enough new material here to warrant a new game.

Bottom line: There’s too much recycling and not enough substantial improvements. The series’ staples are here and enjoyable, yet innovation is missing.

Recommendation: Tree of Tranquility is worth buying if you have the time to leisurely wade through all it has to offer. Still, don’t be surprised if you find yourself tempted to toss it on top of the trade-in pile.

Even Gordon Freeman Can’t Fix This